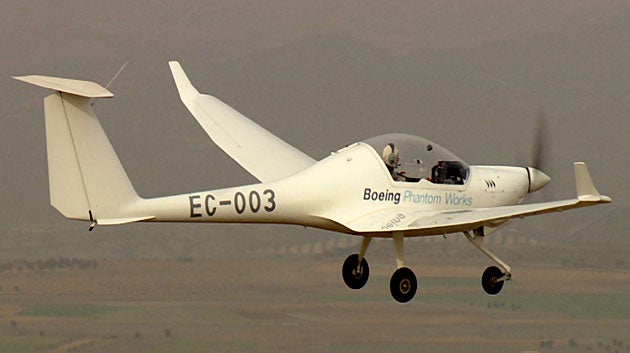 Yesterday Boeing announced that one of its pilots recently took to the air in an airplane powered by hydrogen fuel cells. This marks the first time a manned aircraft running on fuel cells has ever successfully completed a flight, though robotic drones have done so in the past.

The plane was (sort of) a two-seat Dimona motor-glider with a 53.5 wingspan. It was modified by engineers belonging to Boeing’s semi-legendary Phantom Works division so that it uses a hybrid system–with a Proton Exchange Membrane–that links an electric motor to a normal propeller. Its only waste products, as a result, are heat and water. Apparently the plane climbed to 3,300 feet on a mix of battery and fuel-cell power. Once at the specified cruising altitude, the pilot disconnected the batteries, and cruised for 20 minutes at 62 miles per hour with only the fuel cells to power the craft.

Boeing doesn’t seem to have much confidence in the notion of some future version of this technology powering commercial craft. But as we reported recently, there’s still hope for green speed in the skies.