A remote-controlled helicopter for the masses 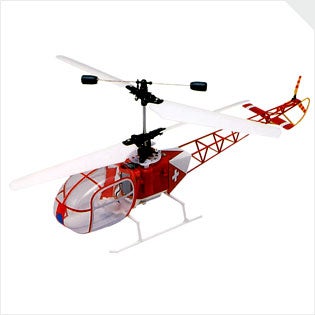 by Courtesy of RcHobby Ltd.

As hobbies go, flying radio-controlled helicopters is known to be one of the hardest to get into. It takes months to learn how to fly the notoriously difficult-and expensive-little machines, and invariably many parts are broken along the way. This is a huge deterrent to anyone even moderately curious about remote-controlled helicopters.

But Hirobo, the Japanese manufacturer of a large array of high-quality remote-controlled products, has introduced what can definitely be considered a breakthrough concept, the X.R.B. Lama indoor-flight helicopter. The smartly-designed and completely enjoyable little helo offers an excellent entree into the world of remote-controlled rotorcraft. Its major innovation: using two counter-rotating blades that eliminate the need for an operational tail rotor (though one is there for cosmetic reasons) and make the helicopter much more stable, and much smoother in flight. That makes it far easier to learn to fly, as well.

Priced at around $300, and available at hobby shops or from importer Model Rectifier Corporation, the XRB is certainly no toy, as examination quickly reveals. The tightly-packaged dual motors are well-balanced in the fuselage, and the rotor head mechanism is clearly a very carefully designed and constructed system. It uses two separate shafts to independently operate each rotor and a series of servos to control each rotor’s pitch–which determines the direction of flight. It’s an excellent system that is possible thanks to recent advances in electronic and mechanical miniaturization.

There is, however, a string attached. It’s about 12 feet long. The Hirobo X.R.B. is actually tethered to the transmitter by a lightweight cable. At first, the notion seems crazy–why would you want to fly a helicopter tethered by a cable? But the genius of the concept sinks in after you spend a few hours flying. First of all, the helicopter is designed for indoor flight only–it’s too sensitive to breezes to fly outside–the space requirements are already more-or-less defined by that, and the tether permits a reasonable amount of flying room. Also, the lack of radio controls keeps the cost of the unit way down.

But the real coup achieved by tethered flight is power. The transmitter plugs into a household outlet–again, this is an indoor flyer–powering both it and the helicopter. When you consider the constraints of battery-operated flight, including seven-minute flight times after 45-minute charges, you quickly realize how wonderful this idea is. You can fly the X.R.B all day long, in twenty minute bursts with just a few minutes in between to cool the motors down.

For beginners, such long flight times are critical, because it does indeed take hours to learn to fly this–but that’s as opposed to weeks for larger, more conventional remote-controlled helicopters. Hovering alone took me several days to master, and I went through at least 15 polystyrene replacement blades after running into furniture and tipping the Lama over. (Fortunately, they are designed to break easily, so it’s very hard to break any of the key metal or plastic parts when you do crash.) But once you get the hang of it–and are able to remember that the controls are reversed when the helo is pointing at you–the Lama is pure fun. In no time you’ll be chasing cats, delighting toddlers, and amusing yourself by hopping from washing machine to cabinet to table.

Your controls are the same as with any remote-controlled helicopter–one stick controls forward and lateral movement, the other throttle and yaw (that is, the horizontal rotation of the fuselage). Your direction is changed by altering the speed of each of the rotors and pitching the blades forwards or backwards. Altitude is a function of the throttle. So once you learn to fly the Lama, it’s a relatively easy jump to more advanced outdoor helicopters.

But then, of course, you’ll have to start charging your batteries up …