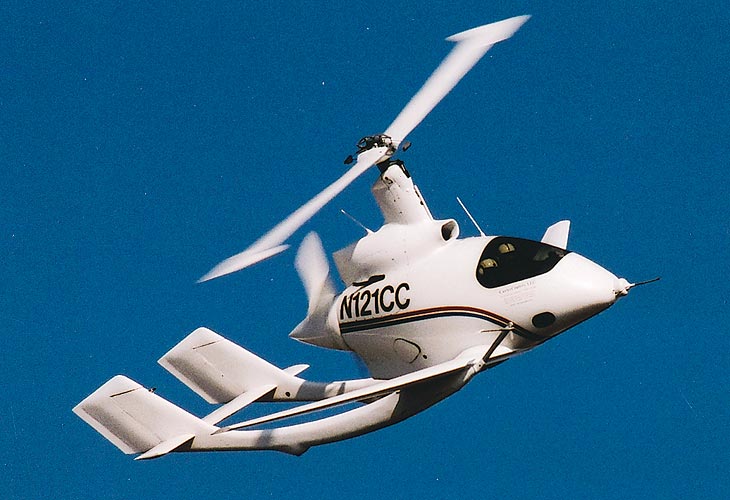 CarterCopter is in the midst of active flight testing-something few fringe programs can claim. The question now is whether the performance is there.

In Wichita Falls, Texas, inside a hangar surrounded by weeds and rusting aircraft scrap, 59-year-old entrepreneur Jay Carter, Jr., is chasing a milestone that he says will one day be as well known in the aviation community as the speed of sound: Mu=1. Beyond it, Carter says, lies an aerodynamical promised land in which aircraft take off like helicopters and then travel forward as quickly and efficiently as airplanes. “We’ll be able to carry four people from a rooftop in L.A., fly at 350 mph clear across the country, and land on a rooftop in New York without refueling,” he proclaims. That’s three times as fast and five times as far as a conventional civilian helicopter.

Carter’s Lone Star twang is as authentic as they come–he grew up in Oklahoma and rural Texas, where he and his father built autogyros of their own design as a hobby. In 1974 he made the cover of Popular Science with a steam-powered car he invented. He graduated from Texas Tech and worked in the R&D department of Bell Helicopter on the XV-15 tiltrotor program. His experience with two distinctly different types of rotorcraft led him to wonder how to improve their qualities in an entirely new kind of vehicle. “Once I got into it,” he recalls, “I was literally up all night.”

Carter’s main obstacle, he knew, would be a speed barrier that has held helicopters back since their creation. A helicopter is limited at high speeds by the velocity of its forward-moving rotor tip, which, as it approaches the sound barrier, generates dangerous stresses and enormous drag. One solution might be to slow the rotation of the rotor blades while still maintaining lift and forward momentum.
That’s where Mu–or the Greek letter “,” representing the ratio of the speed of the blade tip to the forward velocity of the aircraft–comes in. At Mu=1, the retreating blade tip sits dead in the air, and the rotor as a whole generates much less drag. Unfortunately, the blades also provide much less lift, and become unstable to boot.

Carter and his team of engineers, test pilots and advisers have spent the past 10 years building an autogyro that they hope will overcome these difficulties. The CarterCopter is equipped with weighted rotor tips for greater stability at low rotation speeds, a modified Corvette engine and a high-efficiency propeller for forward thrust, and a pair of slender wings to compensate for the loss of rotor lift. He applied for the first patents in 1994 and flew a prototype in 1998. In five years of testing, the CarterCopter has logged 100 hours in the air and achieved a top speed of 173 mph–but it still has not achieved Mu=1 flight. It has, however, crashed eight times, most recently in May, when an in-flight fire destroyed much of the engine compartment.

Forecast: Sun, then coulds, then sun…
Although Carter’s backers remain enthusiastic, the skeptics’ ranks are growing. “The main problem is the rotor blades. During forward flight, you can’t just let them flail around in the wind, because they generate a tremendous amount of drag,” says aerodynamics expert Hollmann. “It has never flown well, and it never will.”

Maybe, but others think Carter is on to something. In addition to financial support from a group of 25 private investors, he has received just over $1 million from NASA in the form of Small Business Innovative Research grants, and last year he signed a data collection contract from the U.S. Army–which is interested in the technology for its next generation of versatile, high-performance air vehicles–that could be worth up to $1 million over 18 months. His goal remains stable Mu=1 flight. His next target for the attempt: early this year.