For Autonomous Robots, The School of Hard Knocks Is In Session 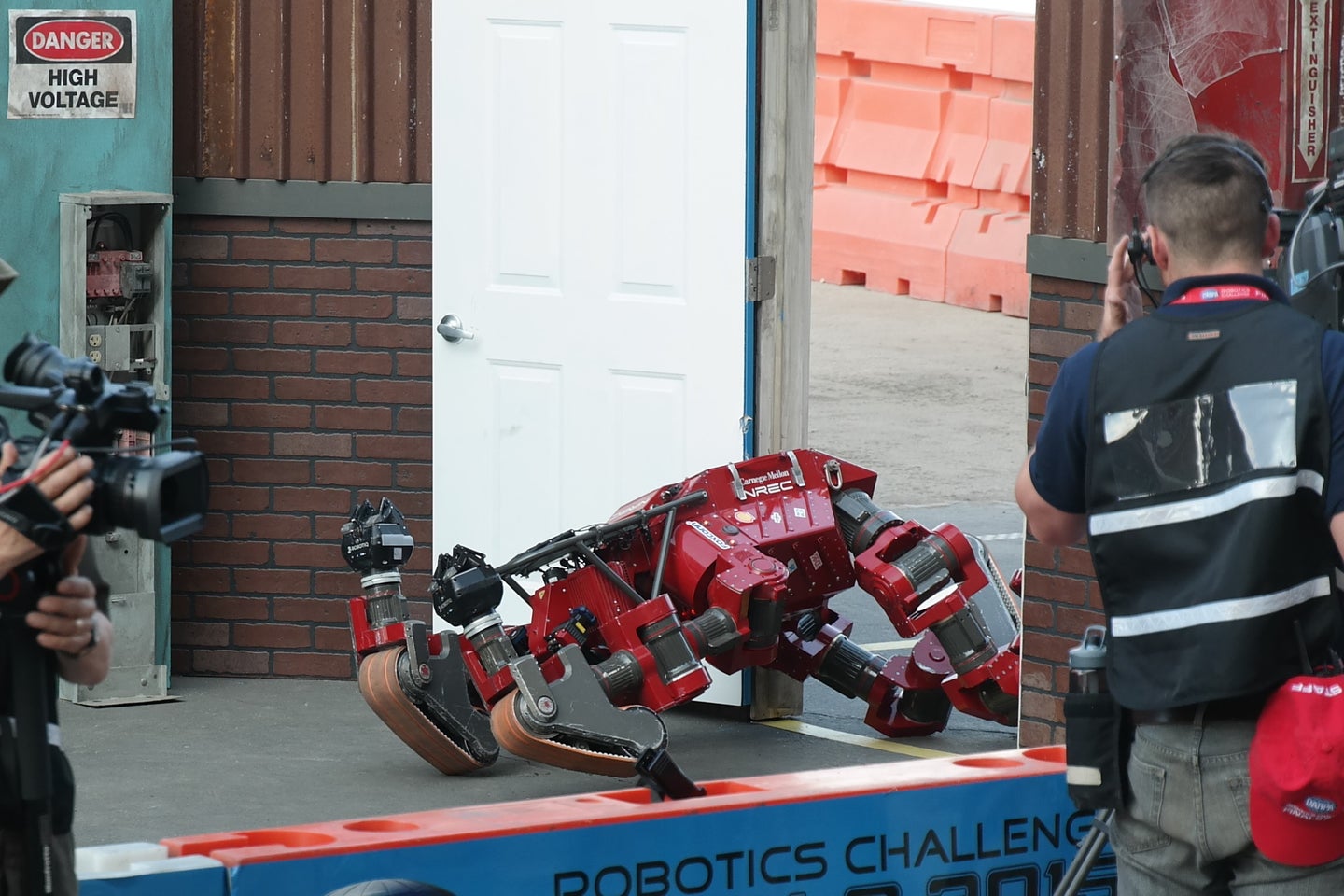 It’s impossible to watch the DARPA Robotics Challenge (DRC) Finals without getting frustrated. What the robots are expected to do in the open-air course at the Fairplex in Pomona, California, which is meant to loosely simulate a disaster zone, is all incredibly simple, by human standards. Drive a utility vehicle at speeds no greater than 10 mph. Turn a valve. Climb a handful of stairs. But in the parallel universe that is the DRC, completing all eight incredibly basic tasks makes the crowd go wild. After the first of two days of competition, the only bot to score the maximum of eight points (one per task) is Team Tartan Rescue’s CHIMP.

The primate-inspired robot from Carnegie Mellon University delivered the DRC’s most electric run so far. It drove down the dirt track with impressive speed, but was then inexplicably slow to get out—or “egress,” in DRC-speak. Finally, CHIMP opened the door, and the impossible happened. CHIMP ate it, sprawling onto the floor halfway through the doorway (as seen in the photo above). The robot that seemed incapable of falling, that we (and others) constantly described as being essentially fall-proof, because of its stable posture and use of tracks instead of two-legged walking, had gone down. Normally this would call for a “reset,” as humans hoist the robot back to an upright position, and DARPA officials add 10 minutes to its time. Since each machine has a maximum of one hour on the course, and most need more than that to attempt every task, resets are devastating.

So CHIMP struggled to get up. But with its legs jammed in the doorway, the situation seemed hopeless. It For most humans, the geometry of this fall would be annoying, but we’d wriggle and grunt and be back on our feet in a matter of seconds. CHIMP lay there for minutes. It would move a limb, and seem to consider its dilemma for a solid 30 seconds before trying again. A camera man next to me muttered, “This is like watching paint dry.”

He wasn’t entirely wrong. CHIMP was probably the single most widely covered robot in the months leading up to the DRC Finals. It’s a burly little 5-foot robot ape, that happens to look a lot bigger and more menacing in photos. And when it’s moving across rough terrain, CHIMP transforms into a tank, using the tracks in its legs and forearms to roll around on all fours. And now, the DRC’s superstar had fallen, and it couldn’t get up.

But in another, more important way, that gentleman was totally wrong. Because as aggravating as it is to watch robots either constantly failing, or spending an inordinate amount of time to accomplish basic tasks, the real action in this competition is largely unseen. It’s in the algorithms that drive these machines, when humans can’t. The DRC is gripping because pushes our current understanding of autonomy to the breaking point, and then snaps it in half. 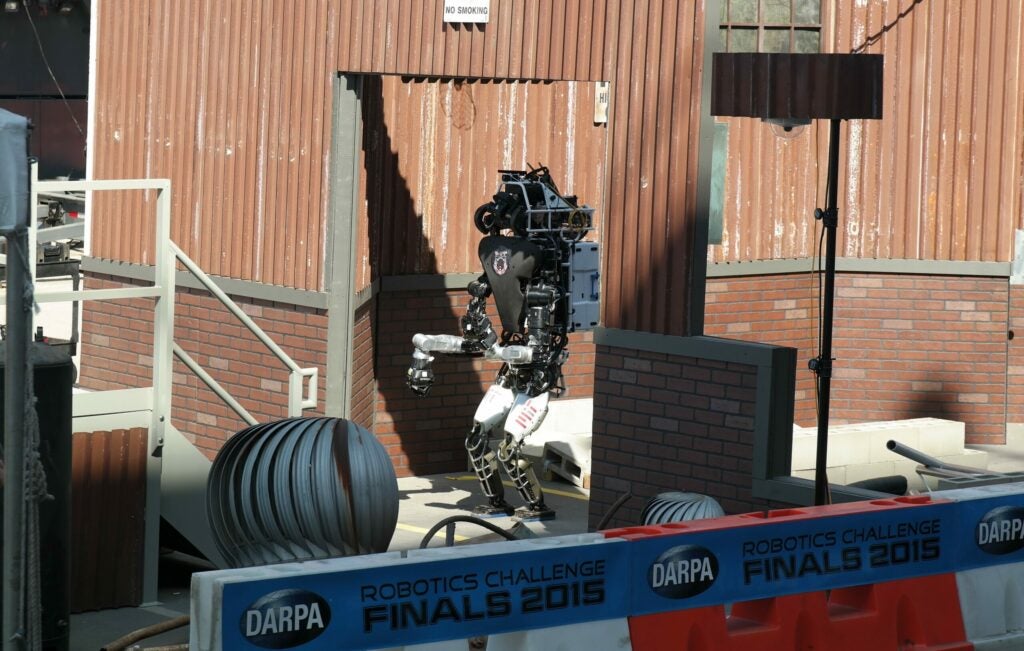 Most present-day autonomous robots are either parlor tricks, or else relying on a constant stream of high-quality data. When a humanoid robot like Honda’s Asimo dances or jogs across a stage, it’s following a precisely-choreographed script. Like a sophisticated version of a wind-up toy, roboticists load up Asimo’s behaviors, and set it loose. Driverless cars employ more sophisticated autonomy, but the vehicles being developed by companies like Google and Audi require huge amounts of data to function. Without GPS coordinates and pre-loaded laser maps of roadways, these cars would be a public menace. If they weren’t misreading onboard sensor data and veering into traffic, they’d be grinding to a halt, trying to make sense of the world around then, including the multi-vehicle pileup they would inevitably cause.

This reliance on data was a key element of DARPA’s last robotics competition. On the morning of the 2007 Urban Challenge, each team was given a thumbdrive with a detailed GPS map of the mock city that their driverless cars were going to navigate. This data was actually richer than standard GPS, with more total coordinates for the robots to follow. The vehicles still had to use autonomy to deal with the non-mapped aspects of their environment, such as other robots heading towards the same intersection. But these machines weren’t on their own. Revolutionary as they were, the cars in the Urban Challenge had a lot of help.

Except, that is, for MIT’s robot car, which was well and truly on its own. MIT elected to go entirely sensor-based, foregoing the provided GPS breadcrumb trail, and relying solely on the robot’s real-time perception of the course to dictate its actions. This would turn out to be a terrible gameplan—the car went off-road at one point, and was literally in the weeds for precious minutes of the race. But the robot eventually crossed the finish line in fourth place. And though they didn’t take home any prize money, MIT’s team leader, John Leonard, claimed victory even in defeat. More than any other competitor, including the Urban Challenge’s winners, MIT had demonstrated pure, no-strings-attached autonomy. And despite the scenic detour, the robot had completed its mission. Winning the race, according to Leonard, was never part of the plan.

Now, MIT is taking a similar approach to the DRC. “Our team has been focusing on autonomy, almost to a fault,” says team leader Russ Tedrake. DARPA is already enforcing a high level of autonomy, by degrading the communication signal between team members and robots, particularly after the machines enter the simulated facility portion of the course. At that point, the data connection is on par with a ’90s-era dial-up modem. As the run progresses, transfer speeds will rise and fall, allowing for windows of more direct remote control.

But just as MIT waved off the GPS data in 2007, Team MIT is opting for as little contact as possible between the team and its Pentagon-supplied Atlas robot, which the team has renamed Helios. According to Tedrake, “that’s not a coincidence. Teller was committed to autonomy, He was always pushing on that side of thing.” He’s referring to Seth Teller, a member of the Urban Challenge team, and the original leader of MIT’s DRC team, who passed away in 2014. 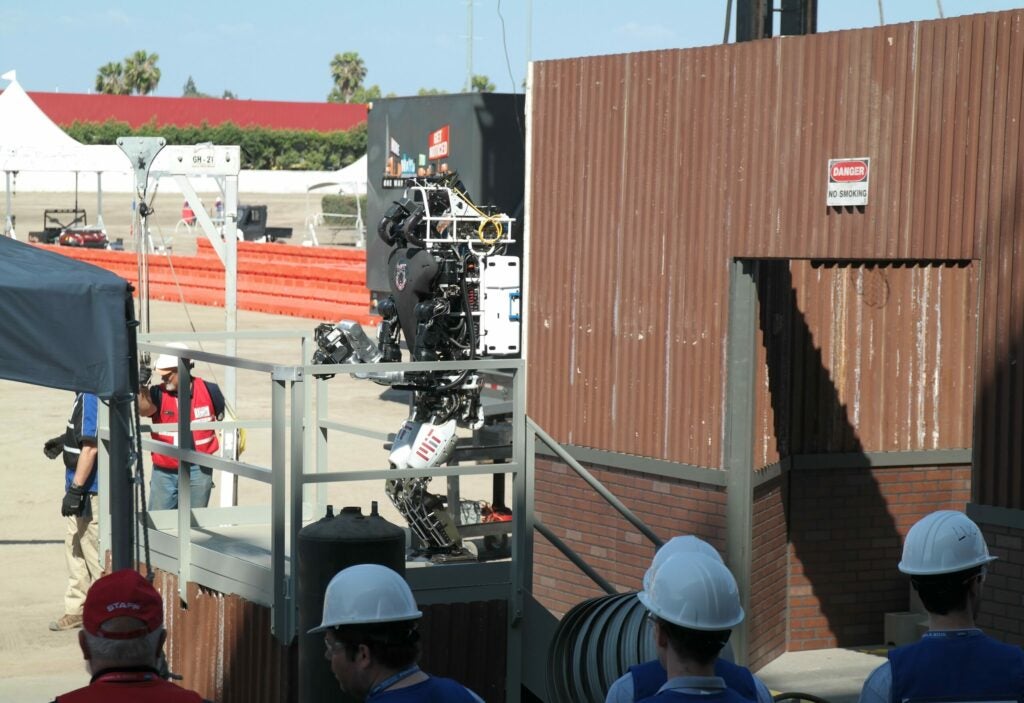 As the new team leader, Tedrake, is pushing just as hard for autonomy over strategy. So when Helios takes an action, it does so with almost no input from team members, despite the fact that more frequent input might get the job done more quickly. A human might help point out the tool that the robot is supposed to use, mouse-clicking on the object via a graphical interface, but the robot does the rest.

This overall approach is shared by DRC teams, which is why watching these robots can be so excruciating. It’s also why CHIMP had such a hard time getting back in the game. A fully teleoperated robot would be far easier to maneuver out of a tight spot than an autonomous one. Most of the inexplicable delays in the DRC, where machines often seem to stare at a door for minutes before daring to grab the handle, have to do with the fact that they aren’t giant RC toys. Their algorithms grind away, masticating on every planned action.

But MIT is part of a minority of teams that takes autonomy to an extreme. “When we’re running most of these tasks, the robot is showing us what it plans to do,” says Tedrake. The robot decides which behaviors are most appropriate, and its masters watch them play out. Lockheed Martin’s Team Trooper appears to be just as hands-off with its Atlas. “The robot knows what each of the behaviors in its library can do,” says team leader Todd Danko. “so it works backward through chain of behaviors, and starts to act…we’re trying to make sure the robot has a sense of confidence that’s correct.”

It’s exciting to see the wide variety of hardware being deployed in the DRC, and the competition is a crucible for the entire research area of walking robots. In the long term, though, the biggest impact that the DRC might have is in software, and specifically in letting a single human control multiple robots. NASA’s Jet Propulsion Laboratory—whose RoboSimian bot is one of the stars of the DRC—is exploring a Toughbook-like tablet that an astronaut could wear on his her wrist, to supervise a group of autonomous machines. Lockheed Martin is also hoping to apply its DRC work to space systems, as well as underwater robots, since many of the lessons its team learns while supervising a humanoid’s actions are hardware-agnostic, and applicable to robots in the air, sea and space.

MIT has already taken advantage of its world-class robot to study autonomy, unrelated to the competition. While prepping for the DRC—which every team leader we’ve talked describes as a grueling, all-consuming experience—MIT was able to conduct and publish autonomy-related research using Helios. Since the Atlases given to DRC teams are technically a loan, Tedrake wants to make the most of his team’s time with the hardware. “We’re not trying to win,” says Tedrake. “We’re in this competition because we want to solve the really hard problems.”

As for CHIMP, its own combination of robotic autonomy and human troubleshooting finally prevailed. It righted itself, used a power tool with its off-hand (the right manipulator was damaged in the fall), and wound up climbing stairs, one of only two ‘bots able to do so, following MIT’s Helios. And the crowd roared, because general purpose autonomous robots might be bad at doing simple things, but at that particular moment, CHIMP was the best that any of us had seen.