The Dream of Delivery Drones Is Alive (And On A Truck)

There's hope for robotic parcel delivery, with or without Amazon 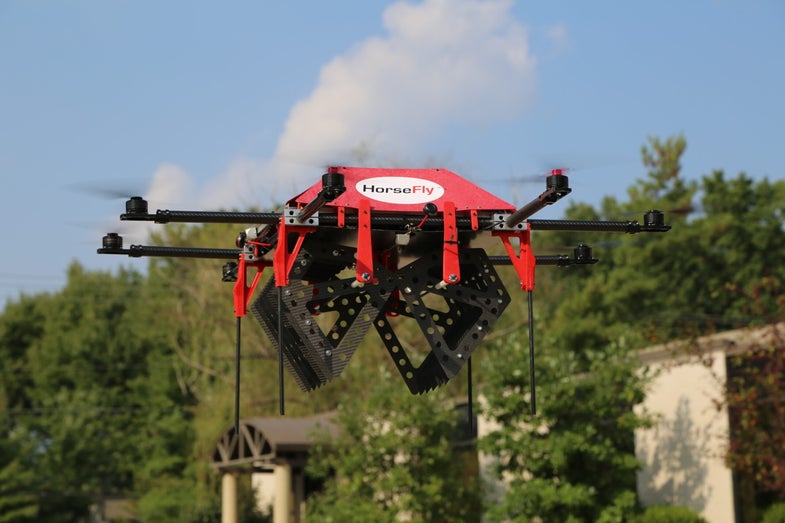 Amazon’s drone delivery service was never going to work. Not in the United States, at least, and not in the near-future timeframe announced by CEO Jeff Bezos in a credulous 60 Minutes segment in December 2013. When Bezos made the prediction that self-guided drones would start delivering packages to customers’ doors as early as 2015, it was clear to everyone building, flying and hoping to fly drones that the Federal Aviation Administration (FAA) had no plans to allow for something like Prime Air to function. Amazon’s program requires autonomous flight in densely populated areas—robots flying themselves, over lots of human beings. There’s no better recipe for disaster, at this early stage in the development and deployment of commercial drones.

And yet, Amazon’s PR stunt went off without a hitch. [Note: Popular Science just ran a Q&A with the VP of Prime Air, who seems like an excellent and conscientious person. My crotchety opinions of Bezos, 60 Minutes, and the way Amazon’s drone program was debuted are my own.] Despite denouncements in the media, the company’s plan become synonymous with the push for commercial drone rules in the U.S. Now that those initial regulations have arrived, the attention is still on Amazon, and whether it’s going to take its delivery drones to another country, presumably one with less stringent safety requirements. The FAA’s requirement that unmanned aircraft stay within a human’s unbroken line of sight throughout its operation is a deal-breaker for Prime Air, as is the restriction on carrying external payloads. That Amazon’s scheme is grounded is not news. It was always going to be.

But there’s hope yet for drone delivery. Cincinnati-based Amp Holdings is currently developing a drone, called Horsefly, that deploys from a compartment in the roof of an electric delivery truck. After each delivery, the aircraft would return to the truck for its next package. It’s strong enough to carry parcels as heavy as 10 pounds (double what Amazon is shooting for), and durable enough to fly through, wind, rain and snow on its appointed rounds.

It’s easy to see why this system hasn’t fired the public’s imagination, or come close to edging out coverage of Amazon’s vision. Delivery trucks—even the electric ones that Amp makes—are unassuming workhorses, and a drone that more efficiently distributes packages within a mile or two radius of that truck is less evocative than the thought of fleets of robots dotting the skyline of major cities.

Horsefly has one major advantage over Prime Air: it makes sense.

But Horsefly has one major advantage over Prime Air: it makes sense. From both a technological and logistical standpoint, Amp’s truck-launched drone scheme is as level-headed about the realities of commercial, airborne robotics as Amazon appears to be ignorant of them.

The biggest advantage of a delivery truck drone, versus one flying from a warehouse, is distance. Consumer and commercial drones are short hop aircraft, capable of 20 to 30 minute flight times before their batteries run dry. Since Horsefly uses a truck as its mobile headquarters, and recharges from the vehicle’s own battery, the octorotor could buzz through its rounds without concerns over range. It could also deliver packages to the rural and suburban customers who would be a challenge for Amazon, and whose yards and driveways are a better fit for the first wave of drone deliveries. Drones, which still aren’t as nimble in cramped low-altitude environments as one would hope, can’t simply leave a package on the sidewalk near the recipient’s apartment building, but they could more reasonably drop it off on the walkway near a home’s front door, or even in the yard near a back door.

Amp’s plan actually accounts for the variety and specificity of different homes, by letting the driver of the truck that Horsefly operates from select the exact drop-off location. On a typical day, the driver would scan a package, and an iPad mounted on the inside wall of the truck would display a satellite map view of the customer’s address. “But a GPS address just isn’t enough,” says Amp CEO Steve Burns. “That’s too wide open.” Once it takes off, the Horsefly will navigate itself to the relevant GPS coordinates. But to determine where it will actually leave its package, the driver relies on his or her experience of that route to zoom in and tap on a more precise drop-off spot. “You don’t have that with the Amazon model,” says Burns. “You don’t have the institutional, or the tribal knowledge that comes from getting the driver involved.”

With that location locked in, the driver would hand the package up to the Horsefly’s claw, and the drone would autonomously fly to its destination. Once there, and while still at a relatively high altitude, the robot would relinquish piloting duties to a remote human operator, who would be in charge of actually lowering the aircraft and parcel to the ground. Dealing with power lines, trees, kids, pets, and other variables would be the responsibility of a call center style pool of certified pilots (initially at Amp’s Cincinnati headquarters) who do nothing but land Horseflies.

A delivery truck costs roughly a dollar per mile with diesel. A Horsefly could drop that cost to 3 cents per mile.

The goal, says Burns, is to help the company’s customers deliver packages with greater speed, and at lower costs. An electric truck is already a step up in efficiency and environmental responsibility from traditional internal combustion trucks, with a delivery cost to the shipping company of 30 cents per mile (compared to roughly a dollar per mile with diesel). A Horsefly could drop that cost to 3 cents per mile. And though Amp won’t specify the price of the drone, the plan is to follow the example of truck pricing, and have its initial cost as an optional feature calculated to pay for itself within three years. There’s no reason to assume that everyday recipients will see lower delivery fees as a result of drone-based efficiency, but packages could arrive more quickly after arriving at the local warehouse of shipping center.

Unfortunately for Amp, the just-released FAA rules won’t allow the Horsefly to operate as intended. Even if the driver does nothing but stare at the drone as it flies to a customer, the line of sight stipulation severely limits where it could land, since trees or homes are more than likely to block the driver’s view as the aircraft descends. The restriction on carrying external payloads, meanwhile, means the delivery drone can’t carry anything to deliver.

But Burns is hopeful that Amp can secure exemptions from the FAA, based on flight data the company has already collected while collaborating with researchers at the University of Cincinnati. Horsefly has been flown at the same indoor football field where other drones have been tested, and Burns is confident that they’ve solved the admittedly daunting problem of carrying varying weights below the craft. “Think of it as a pendulum down there swinging. We have that conquered. That part we aren’t worried about. Once you can demonstrate to them that you’ve done the math, they can become believers,” says Burns, referring to the FAA.

Amp applied for its first exemption—to test the Horsefly outdoors with an external load—back in December, in conjunction with the University of Cincinnati. When I spoke to Burns at that time, he believed the FAA would grant it as early as March. He still thinks that’s a strong possibility, but he’s certain that the exemption will happen by this summer. Once outdoor tests are underway, Amp will apply for another exemption, that would allow for limited operation without line of sight. Seeking exemptions for drones is nothing new, or exceptional, and Burns claims that the FAA’s response to Horsefly’s mix of autonomy, remote operation, and truck-based deployment has been positive. “They like our model, that these are going to be short hops, They like that there’s going to be a driver nearby, in case there’s a problem with the drone. And they like that we’ll have to work with a large delivery compony to get this started. When someone has a major brand to protect, and they’re creeping into this space, with a lot to lose if, I think the FAA is very comfortable with that.”

A recent NPR story incorrectly reported that UPS was already planning to deploy Amp’s drones. But since Amp isn’t itself charged with delivering packages—it just provides the trucks—its initial, limited field tests will have to involve an establishing shipping partner. Provided the exemptions go through, Burns sees that first test happening as early as this year, in a rural area where the driver can watch the drone’s entire flight path (though landing it might still mean breaking line of sight). It might be a baby step, and it might not happen at all, but Burns says that he understands the FAA’s hesitance, even if means delaying his drone plans. “If I put myself in their shoes, I’d be just as careful with this technology. This is sweeping, internet-like change. This is historic,” says Burns. “The reason Amazon is so upset is that they have no shot, because they’re coming out of a central warehouse. But our people are well displaced. We have that mile line of sight. We can live in that exemption space for a while.”