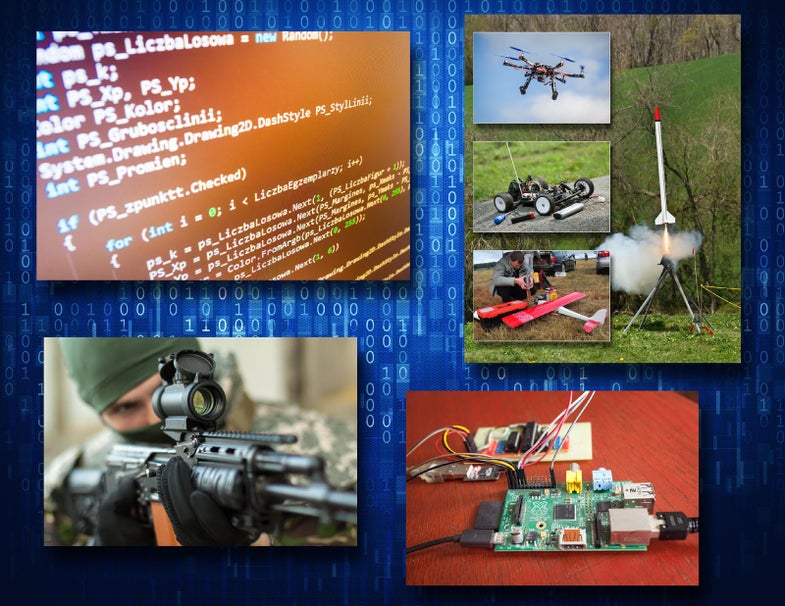 Defense technology is a dialog, and it follows a rough script: the defense creates a new form of protection, and then the offense figures out a new and different way to get past it. It’s not a particularly clean dialog, and in combat people die when engineers get the answers wrong. DARPA, the Pentagon’s blue-sky future projects wing, has spent decades trying to figure out the right technologies for future war, so they can always have the right answers to the offense/defense conversation. With IMPROV, new project announced today, DARPA wants hobbyists to get rid of the script and figure out how to turn commercially available, off-the-shelf technologies into new weapons.

To get people excited about this program, DARPA held a media call with John Main, program manager in DARPA’s Defense Sciences Office, and Rick Weiss, DARPA’s director of Strategic Communications. The selected media were all very technical and scientific publications, and DARPA chose to preview this program to us because “the readership of our publications might be especially interested, not just in knowing about this new exercise, but might be interested in actually participating.” That means you, dear readers.

Main and Weiss are calling it “the world’s biggest red team,” a reference to the practice of having a friendly outside group try to figure out one’s own defenses, before an enemy does. The threat DARPA is worried about here is one they don’t yet know.

“DARPA is in the surprise business, and we try to prevent surprise,” Main said. “It’s about being proactive rather than reactive.” So rather than waiting for America’s enemies, be it insurgents, criminals, or even nations like Iran and Russia, to discover that a hoverboard, combined with fertilizer and a remote control, is a new deadly bomb, DARPA wants to pay people to develop it first, and then learn how to counter it.

The search is limited to commercially available projects, which is a super broad category. Main defined it as “anything you could purchase and use, from cell phones to model rocket motors, to construction equipment, to dive equipment, to UAVs, to any sort of hobbyist equipment or sophisticated engineer equipment that’s available right now.” When asked if this was focused on cyber technologies, DARPA deferred, instead focusing on the physical threats that can be assembled from existing stuff people can buy off of Amazon or Alibaba.

The program is going to move fast. DARPA is going to post the solicitation sometime in the next couple weeks. Accepted projects will have 30 days for feasibility studies, 75 days to develop working prototypes, and then a short period of time for the projects to be evaluated. DARPA’s changing how they do acquisition rules for this project so that it’s easier for regular people to submit, not just defense contractors. The expected awards for submissions are around $40,000.

“We have to respect the laws of the United States.”

When asked, DARPA officials refused to specify what kinds of projects they want people to look at, so as not to poison the well of submissions. There is one fairly reasonable caveat: “We have to respect the laws of the United States,” said Weiss. That means if you propose something like a flamethrower attached to a drone, you’d better not be living in Connecticut where the practice is outlawed.

DARPA just posted the full solicitation online! Notably, it includes the funding awards for each phase. Up to $40,000 for the Phase 1 Feasibility Study, $70,000 for prototype construction in Phase 2, and $20,000 for prototype evaluation in Phase 3. These awards will come after DARPA evaluates 2-page abstracts and then encourages proposals from the abstracts it likes. Below, the full introduction to the program, to get a better sense of just how broad a net DARPA is casting for Improv: