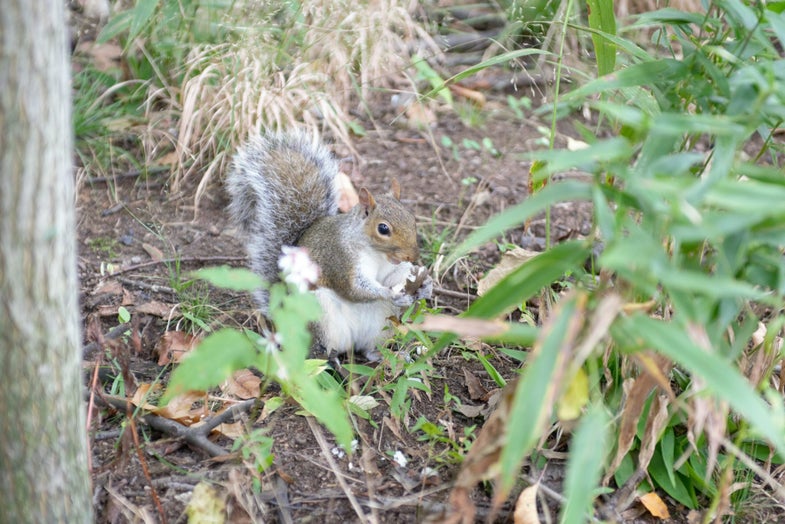 A biker shifting gears sounds a lot like a snapping branch. Or at least that’s what Josh O’Connor, Field Commander for the Central Park Squirrel Census, told me. Though it sounds like a trivia fact, it makes a difference when searching for squirrels, who are always dropping acorns and snapping twigs above our heads. A volunteer with 15 minutes of experience under my belt, I looked up expecting to find a squirrel rustling in the tree canopy, but O’Connor looked out. Sure enough, a bike whizzed by on an incline seconds later.

This knowledge is hard-won, but he’s happy to share. From 6 to 9 a.m., he tells me, off-leash hours send squirrels straight to the treetops, the better to avoid meandering dogs. (“They know what time it is,” he says. Around 8:45 a.m., “they start perking up.”) Other species, like chipmunks and birds, are plentiful, he notes, but the raccoons were recently decimated by canine distemper virus. And while squirrels haven’t been observed eating the nuts of the park’s abundant gingko trees, O’Connor says humans certainly have, turning the fleshy white orbs into soup, or roasting them as a salty snack.

Though O’Connor can detail Central Park’s every quirk, the scraggly-bearded, bandana-wearing squirrel scout actually makes his home in Portland, Oregon. It’s just that, for the past two years, he and his friends have been preparing for this census. Day jobs fighting wildfires (like O’Connor) or writing novels (like the census founder, Jamie Allen) permitting, this ragtag crew has mapped every bit of the park’s 840 acres and observed animals of all stripes as they go.

The two-week-long census, which aims to count every squirrel that calls Central Park home, began on Oct. 6. It quickly generated immense interest, as evidenced by how fast the volunteer census-taker slots filled. It also drew ire, mostly from skeptics unconvinced of the need for a squirrel tally. But O’Connor says the enormous undertaking and sharp-eyed scrutiny will have been worth it so long as the Squirrel Census succeeds in its humble goals of storytelling and scientific data collection.

So into the park we go.

Related: How a pair of wildlife rescuers ended up with a chubby pet squirrel named Thumbelina

Though squirrels feel like timeless, omnipresent inhabitants of our urban greenspaces, the Eastern gray squirrel is actually a tiny transplant. Planners and park rangers only introduced the bushy-tailed critter to the urban jungle in the 1870s. Previously, the creatures were confined to woodlands, where they were fair game for hunters. When one did wander into the hustle and bustle of lower Manhattan in 1856, cops had to break up the resulting crowd. Set free in New York’s green spaces and Philadelphia’s colonial squares, however, they quickly proliferated. Squirrels have served as a much-needed source of entertainment ever since.

Still, no one knows how many squirrels actually populate any given park. That’s largely to do with resources. Getting an accurate count of any species is difficult, especially when they’re small. In New York, park department volunteers conduct a regular tree census to map, classify, and count every arboreal citizen in all five boroughs. (Last tally: 678,604 specimens of 422 species.) But trees are recognized for their economic and environmental value; they reduce wastewater runoff, offer shade, and fix oxygen for human lungs. Squirrels, by contrast, appear merely cute.

Some people probe deeper, however. Jamie Allen, a writer living in Georgia, wanted to know whether squirrels were abundant enough to leading an uprising against humankind—in a fictional context, of course. It’s often said there are a 100 rats for every human in New York City, how many squirrels were there compared to people in Atlanta? In 2012, he enlisted friends and researchers at nearby Emory University in what may be the world’s first—but was certainly not thew world’s last—squirrel census, in Atlanta’s Inman Park.

It revealed that the Inman squirrel population was 861—sizable, though still outnumbered by humans. A follow-up in 2015 charted the community’s substantial growth, rising to 928 squirrels in just three years. The results also served as independent validation for a research paper on West Nile Virus in urban mammals. Emory researchers were investigating ways the disease could travel through an urban landscape, from, say, squirrels to humans. The census data allowed the scientists to characterize their research population, and set about their primary analysis, which showed a sizable portion of the animals did indeed harbor antibodies to the virus, indicating its passage through non-human park lovers.

The census in Central Park clearly benefits from the team’s prior experience. Applying statistics, mapping tools, and common wildlife research methods, they divided the entirety of the park into hectares. The 100 meter by 100 meter plots, O’Connor says, are roughly the range of an individual squirrel. Each plot is set to be surveyed twice, once in the morning and again in the evening, to give some semblance of the day’s true ebb and flow. Each volunteer heads out with elaborate tally sheets, where they describe each of the squirrels they see. Age (adult or juvenile) and primary and secondary colors (cinnamon, white, gray, black) must be recorded. Just as important is the squirrel’s behavior under observation: do they run toward or away from you, or are they totally unbothered? Are they on the ground, foraging, or in the tree chasing something—or being chased?

My hectare, 39-B, was divided in half by an active walking path. One section was defined by a freshly-mown lawn and children’s playground. The only animals visible were a few dogs (now leashed) and some beautiful birds, including a plump red cardinal. But across the walkway, in the craggy North Woods, O’Connor and I spotted a whopping 11 squirrels. (For reference, my colleague, PopSci‘s Tom McNamara, spotted only 5 in his hectare.) I promptly plotted each animal in the half-page visualization of my hectare.

Where many urban squirrels are unbothered by human activity, the animals in hectare 39-B were defensive. People, it was clear from their attitudes and the absence of trash, seldom spent time here. One strode out to the edge of a branch to yell at me. Like any good rodent census-taker, I recorded his call on my tally sheet. It was a certified “kuk,” which sounds similar to a car alarm, and is not to be confused with a “quaa,” a sound of diminishing distress, or a “moan,” the quietest and lowest-stakes vocalization. I felt compelled to “kuk” back, but restrained myself.

Forty-two minutes of field observations and a dozen bug bites later, I made my way back to the rendezvous point and turned in my tally sheets. Over the next few months, O’Connor and his fellow squirrel fanatics plan to analyze the raw data and transform it into beautiful data visualizations and usable open-source data. Of course, they will also issue the long-awaited number: the sum of all squirrels residing in Central Park.

Like the Atlanta census, it could inform research on urban ecology or even human health. But even without another peer-reviewed research paper, the benefits of conducting such a census were clear. In just a few hours, I tripled my knowledge of my furry neighbors—and the environment we shared. Other volunteers and passersby who stopped to inquire about my clipboard, seemed equally inspired. While I don’t expect to ever match O’Connor’s sixth sense for these creatures, on my next walk through the park, I’ll be sure to stop and count the squirrels.