Inside the dreaded 'pogo effect' 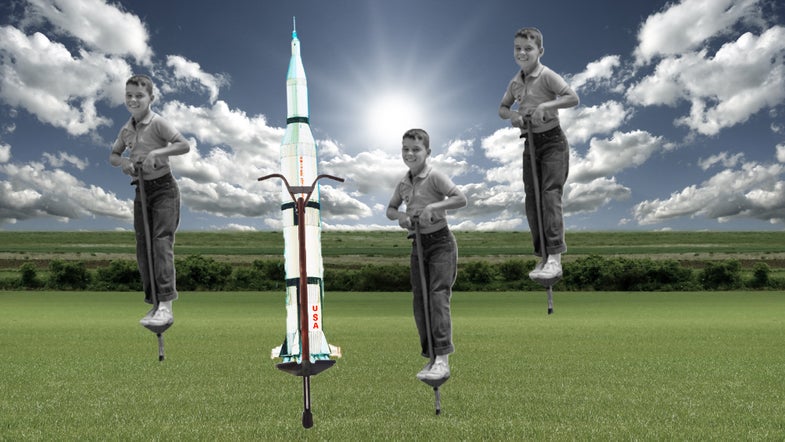 At 7 o’clock on the morning on April 4, 1968, Apollo 6 thundered off the launch pad. Everything looked perfect until the rocket started vibrating in flight so hard it was almost bouncing up and down. The so-called pogo effect (it’s almost like the rocket is bouncing on a pogo stick) increased g-forces in the spacecraft and shook the rocket’s frame so hard that loose structural panels on the lunar module adapter section fell off. The irregular launch also destroyed the flight path, leaving the spacecraft in a highly elliptical orbit rather than the planned circular one. Luckily Apollo 6 was unmanned, but the problem was bigger than one mission. NASA had spent years solving the pogo problem only to see it return, this time threatening manned lunar missions. 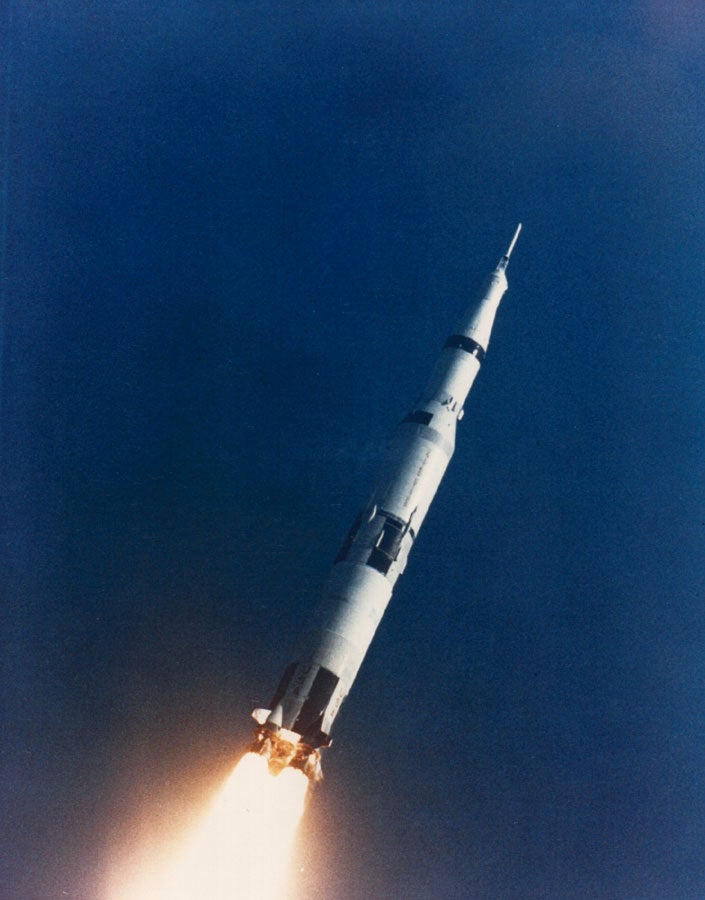 Pogo is, properly speaking, a thrust axis vibration response seen in liquid fueled rockets that can have devastating effects on the vehicle’s whole structure and, by extension, a crew on board.

Think of a rocket upright on a launch pad. For that rocket to get off the ground, propellant and oxidizer have to flow down into the combustion chamber at a high enough pressure to burn with enough power to propel the whole stack off the ground. That sustained reaction, usually with multiple stages, maintains that momentum to put the rocket into orbit where the engines shut down.

As the rocket rises, g-forces start pushing down on it; it’s analogous to feeling a slight increase in your weight as an elevator moves upwards. That upward motion can force more propellant into the turbopump, increasing the pressure and causing a surge. This slightly increases the rocket’s velocity adding to the downward force on its stricture, but also increases back pressure against the incoming fuel. This reduces engine pressure, which in turn causes more fuel to flow into turbopump, which can cause another surge.

This self-excited vibration becomes a cycle. The engine vibrates up and down with the direction of the rocket’s travel, and if these vibrations match the resonant frequency of the rocket’s structure, which varies as the tanks empty, the whole vehicle will “bounce.” And this bouncing motion can not only damage hardware, it translates to alternating positive and negative g-forces in the cockpit. Couple this with the g-forces associated with a nominal launch and a crew can be in for a painful and potentially dangerous ride. 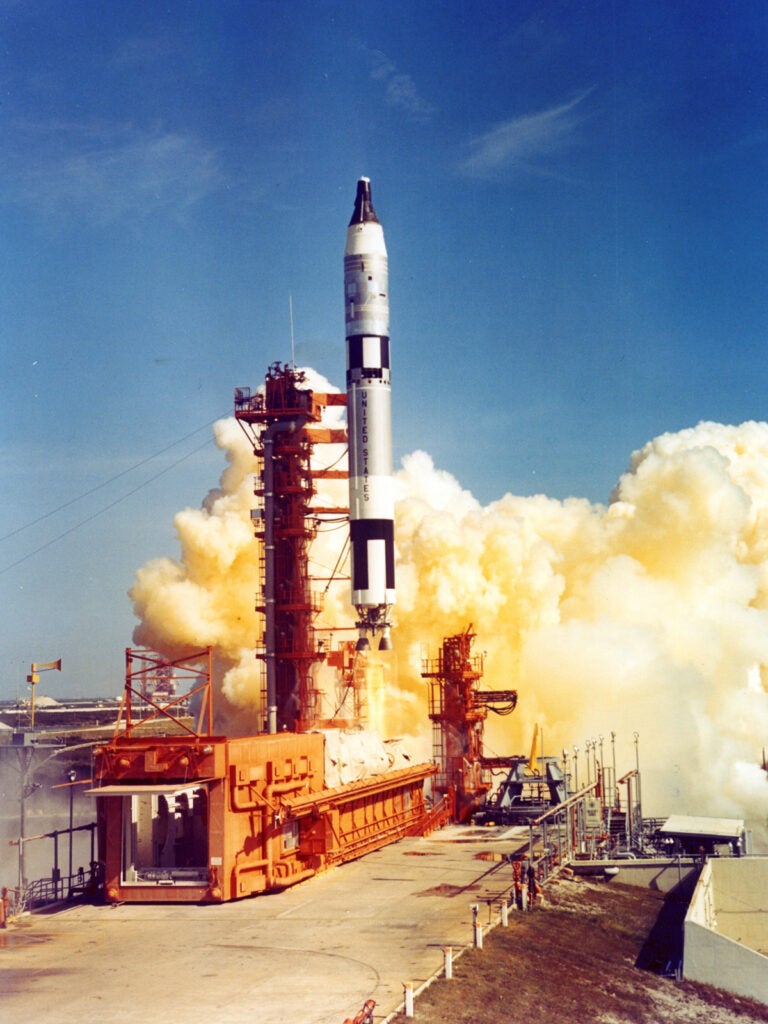 The Titan II launched the Gemini program. Gemini 5 was the first manned mission to experience some pogo.

The pogo problem first manifested on March 16, 1962, the first time the US Air Force tested its Titan II missile, the same missile NASA intended to modify to launch its Gemini missions. The missile vibrated in flight between 10 and 13 hertz for half a minute, an amplitude that translated to about 2.5 positive and negative g’s (+/-2.5 g’s). NASA’s research said those g-forces would not only be painful for an astronaut — particularly to his eyes, testicles, and brain — it could impair his ability to react to an emergency. This wasn’t something Gemini could afford; astronauts on these missions would have far more active roles than on Mercury missions so he needed to be conscious and alert. NASA set the limit of acceptable g-forces from pogo at +/-0.25, so one-quarter the force of gravity. Clearly the pogo problem would have to be solved before a Gemini mission could fly.

As the owner of the Titan II, the Air Force set about troubleshooting, starting with figuring out exactly what was causing the pogo effect in the Titan II.

A launch in July of that same year gave the first clues. Increased pressure in the fuel tank decreased the pogo amplitude slightly, suggesting the problem lay in the feedlines. This raised the potential solution of adding standpipes partially pressurized with nitrogen into both the propellant and oxidizer feedlines to damped the vibrations. But this ended up having the reverse effect. A Titan II with this modification launched in December and doubled the amplitude of the pogo.

The unsolved pogo problem took its toll on the Gemini program by delaying launches, an inevitability since there wasn’t an alternative rocket. But ongoing troubleshooting eventually turned up a solution: increasing the pressure in the fuel tank, adding a standpipe in the oxidizer feedline, and adding mechanical accumulators in the fuel lines.

Titan missile N-25 was fitted with these fixes and launched on November 1, 1963, and it looked like the problem was solved. Pogo vibrations were the lowest ever recorded on a Titan II, peaking at just one-ninth the force of gravity, which was well within NASA’s safe range. This cleared the space agency to move ahead with Gemini launches, and over the course of 10 manned missions only a few experienced noticeable but mild pogo.

NASA thought the pogo problem, fairly well understood at this point, had been solved and a solution worked into the design of the Saturn V rocket. So when pogo dogged the Apollo 6 launch it was a bit of a shock. Oscillations on this mission translated to +/-0.3 g’s in the unmanned Apollo command module, which was above the safe limit for NASA. Again, the pogo problem had to be solved before a manned launch. 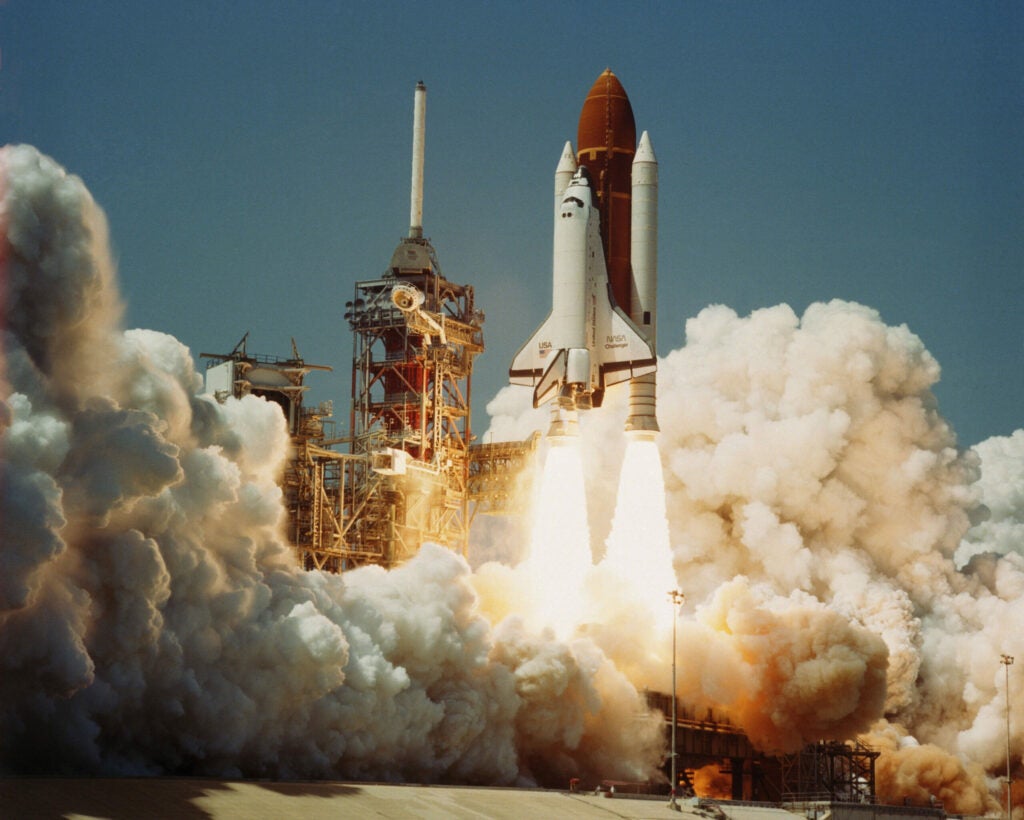 The shuttle’s main engines had a pogo suppression system that prevented dangerous vibrations.

In the case of the Saturn V, the combustion chambers of the F-1 engines that powered the first stage were known to vibrate at the same frequency as the rocket’s structure as its mass reduced in flight, prompting the closed-loop feedback that made the pogo worse. Without time to go in and change anything in the engine design, the solution was to use helium gas from the tank pressurization system to fill cavities in the engines’ liquid oxygen prevalves, turning them into proxy accumulators that could dampen the vibrations.

The solution worked on the next Saturn V launch, the manned Apollo 8. But there was a surprise in store. About 50 seconds before the end of the second stage burn, the engine cluster started to vibrate. The second S-II stage had a pogo problem. The vibrations weren’t felt too strongly by the crew and it didn’t disrupt the mission — Apollo 8 successfully orbited the Moon in December of 1968 before returning to Earth — but the engineers could see it was a critical problem that needed a solution.

The first fix of increasing the oxidizer tank pressure didn’t work; Apollo 9’s S-II experienced pogo vibrations with a peak of +/- 12 g’s that luckily were not felt by the crew. Growing worried the pogo problem could delay the Moon landing — this was March of 1969 so NASA only had months left to fulfill Kennedy’s promise to the nation — engineers developed a workaround solution and changed the launch procedure. Now, the centre J-2 engine would shut down 60 to 75 seconds to avoid the worst of the pogo. The remaining four engines would burn slightly longer to compensate for the loss of thrust. This, incidentally, is what happened on Apollo 6, though the loss of the centre engine had nothing to do with pogo.

The solution worked, and the remaining Saturn V launches didn’t experience any pogo serious enough for an abort. Though there were close calls, notably on Apollo 13. The centre engine on the second stage started vibrating so hard and fast it could have seriously damaged the spacecraft and harmed the crew, but it shut down early for an unrelated reason, and the mission went ahead.

When NASA designed the Space Transportation System’s launch system, it addressed the pogo right off the bat. The shuttle’s pogo suppression system in the Space Shuttle Main Engines used a partially filled gas accumulator attached by flanges to the oxidizer turbopump’s inlet duct. As a result there were no serious pogo instabilities throughout the program.