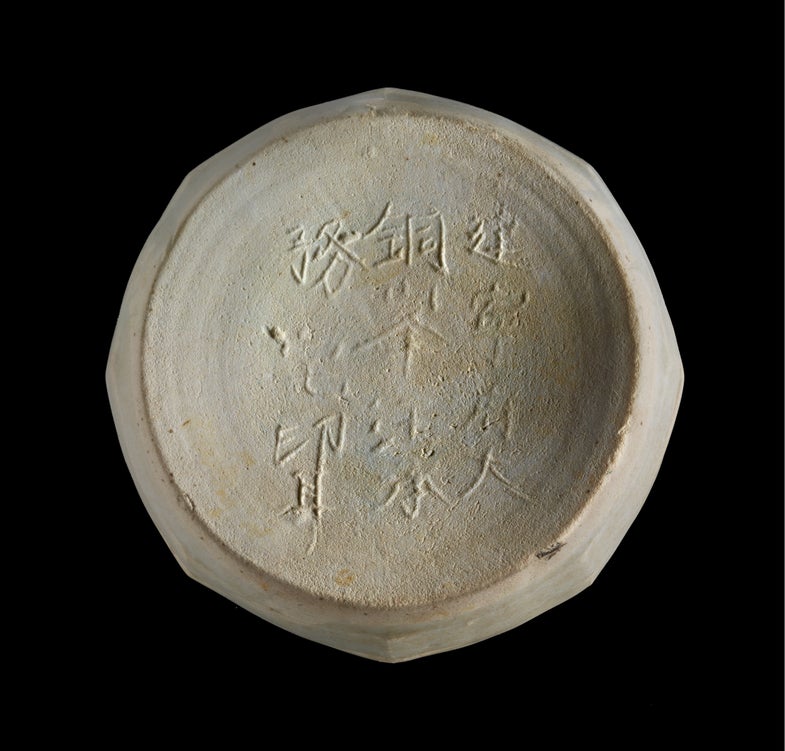 The inscriptions on the bottom of this ceramic box base mention a city, Jianning Fu. The inscription helps date the shipwreck that carried this artifact to 100 years earlier than previously assumed. (c) The Field Museum, cat. no. 344404. Photographer Gedi Jakovickas
SHARE

The wooden ship sailing through the waters between the Indonesian islands of Sumatra and Java held a fortune. Its hold was packed with 200 tons of iron and 30 tons of ceramics from China. Rounding out the cargo were elephant tusks, aromatic resins, and potentially jars of foodstuffs or fabrics—all valuable trade items headed for a distant port. Then, disaster struck. For some reason (potentially a storm) the ship foundered, sinking to the bottom of the Java sea.

It lay on the seafloor for centuries until the late 1980’s, when local fishermen notices a lot of seabirds flying over the site, and figured it would be a great place to fish. “But when they started to do their work, they started bringing up ceramics,” says Lisa Niziolek, an archaeologist at the Field Museum. “Unfortunately for us it’s far more lucrative for them to sell ceramics than fish so there was a lot of looting at the site by local divers prior to 1996 when Pacific Sea Resources came in and did the final salvage work.”

Niziolek is the lead author of a new study published in the Journal of Archaeological Science: Reports, which took a closer look at the artifacts from the wreck, and found that the ship sank nearly 100 years before it was previously thought to, thanks in part to the equivalent of a ‘made in China’ inscription on a few of the pottery pieces.

The artifacts from the ship took a circuitous path to Niziolek and colleagues at the Field Museum. Niziolek explains that when the private company Pacific Sea Resources got permission from Indonesia to salvage the wreck site, they were required to give half of the cargo to the Indonesian government. The other half was theirs, to do with as they pleased. An archeologist, Maichel Flecker, was part of the salvage mission, and had meticulously mapped the site and documented the placement of the artifacts on the seafloor during the salvage process, in addition to taking a sample of resin and running it through radiocarbon dating, which put the age of the wreck at about 700 years old.

All those efforts made the wreck not just monetarily valuable, but also scientifically valuable, giving future researchers the information needed to do more research on the site, even after it was excavated from its resting place. In the end, the company donated their half to the Field Museum in Chicago, where Niziolek eventually started looking into the ceramics that had been on board.

When she showed pictures and samples of the fine china that was onboard to other ceramics experts in Japan and China though, her colleagues had an interesting reaction. “Some of them looked at a number of these pieces and they shook their heads and said ‘hmmm these look more like the 12th century or could even be the 11th century’,” Niziolek says, which is earlier than the mid- to late-13th century date than prior investigations had determined.

She and he co-workers decided to take a closer look at some of the artifacts and found an inscription on the bases of two ceramic pieces that mentioned a place, Jianning Fu, a prefecture in the Fujian province in China. “Jianning Fu is referring to the place where these pieces were produced. In that sense it is like a ‘made in china’ stamp.” Niziolek says, likening it to the ubiquitous stickers and stamps that demarcate commercial goods produced in China.

“It wasn’t unusual at the time for ceramics to have inscriptions on them—usually though, they would indicate a family name, the family who owned the workshop where the pieces were made,” Niziolek says. But that wasn’t the most unusual thing about the inscription. That particular name shouldn’t have existed on dishes that were only 700 years old. 700 years ago, that location wasn’t called Jianning Fu. The prefecture changed its name in a transition of power in 1278 (a.k.a. Kublai Khan taking over China), becoming Jianning Lu.

The inscriptions were another clue that the date they had wasn’t quite correct. Now it was time to see if a new radiocarbon dating analysis agreed. The researchers took three samples from different artifacts on the ship, including resin and ivory. They used accelerator mass spectrometry, a dating method that could measure the carbon isotopes in the organic samples with more precision and sensitivity than the tests run in 1997 were capable of. The result? The goods on the ship were likely 800 years old, not 700.

In this case, the change in date helps the shipwreck find a better fit in its historical context. Niziolek says that about 40 years before the the earliest time this ship would have sailed there was upheaval in China. “That’s a time when the Song dynasty court was forced from the north to the south by invading Jurchen, who established the Jin dynasty. The overland silk routes would have been cut off to the Song dynasty court, and they came to rely more heavily on the maritime routes. That’s not to say those maritime routes didn’t exist prior to this, they just became more used.” Niziolek says.

The ship routes were also perfect for transporting pottery, which is easier to carry safely over the sea than on land. The researchers think this ship was probably headed for a port on Java, where it would have traded the goods on board for other luxury items, including spices like pepper, which were highly prized.

There’s still a lot to learn from the artifacts in the shipwreck. Niziolek and her colleagues are looking into where the goods on board came from, narrowing down the source of the resin (it may be from Gujarat in India, or Japan), or using DNA analysis to try to trace the origin of the elephant tusks. Niziolek is particularly focused on linking the ceramics to specific kiln sites in China, which could build up the picture of trade in the region even more broadly.

“It’s important to realize how many stories and how much information we can get from this single collection. Even if wasn’t procured under ideal circumstances we’re still able to take it and really invest a lot in terms of the research to look at these processes that people are familiar with every day.” Niziolek says. “You think now we live in this globalized economy, but 800 years ago, it was very similar.”