How To Milk A Devil 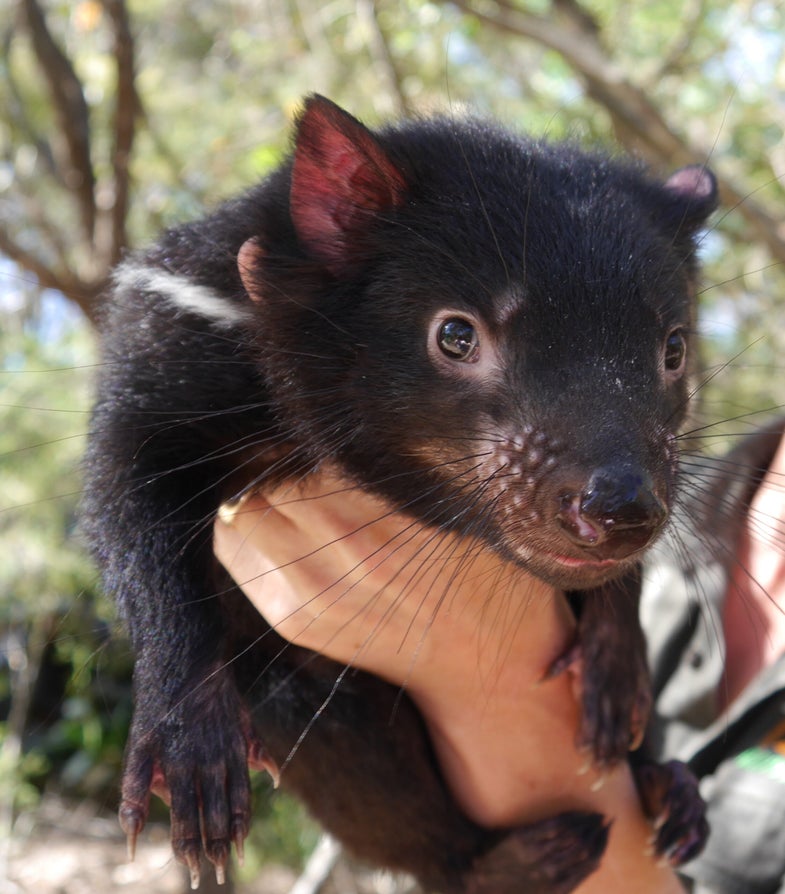 The milk of the Tasmanian devil, it turns out, is filled with compounds that kill bacteria, including antibiotic-resistant strains such as MRSA, researchers reported in the journal Scientific Reports. These immune compounds, which belong to a group called antimicrobial peptides, protect Tasmanian devil joeys while they dwell in their mother’s pouch, and could be developed into drugs for people.

The milk samples for this work came from lactating devils at Devil Ark conservation facility. The staff already had some practice milking Tasmanian devils because female devils, like humans, occasionally suffer from mastitis. “I have had past experience where I’ve had to do hot compress antibiotics and massage female devils to enable them to express that milk,” says Devil Ark general manager Tim Faulkner.

Faulkner and his colleagues milked the devils by swathing them in custom-made sacks that left their teats exposed. “The teats…are really, really swollen, they’re really packed with milk,” Faulkner says. “We simply…massage the gland, use a hot compress to break that milk up, and essentially just run your fingers along down the teat and the milk will express.”

They then collected the milk in little vials sitting beneath the teat. “It’s like putting cow’s milk into a bucket on a smaller scale,” Faulkner says.

Milking a Tasmanian devil might sound like a harrowing ordeal, but Faulkner says this was not the case. “When they have contact with humans they don’t try and rip your calf muscle off your leg,” he says. Tasmanian devils in the wild (and in conservation facilities that encourage them to retain wild behavior) are actually rather timid around people.

So no keepers were savaged while collecting the precious milk. “They do very well when they’re dark, they’re confined, they’re concealed; they’ll relax, and so essentially it’s a very nonintrusive process,” Faulkner says.

For the new research, the milk was donated by Tasmanian devil mothers whose pups were old enough that they no longer needed to be fused to the teat at all times.

Having sampled the milk for himself, Faulkner can attest that it is tasty. “They’re at the latter end of pouch development, which means the milk is giving them lots of nutrients but also lots of fat,” he says. “It was like cow’s milk untreated; you know, thick, creamy, very sweet.”

For newborn Tasmanian devils, life does not get off to an easy start. The 20 to 30 tiny, hairless joeys in a litter must race from the birth canal to their mother’s pouch, where only four teats await. Only the first four to finish the climb will survive. They remain clamped to the nipples for the next several months, even being dragged along underneath their roving mother.

The winners of this fierce competition face another challenge. Like other marsupials, they are born at an early stage of development, after only a few weeks’ gestation. So they don’t have a mature immune system, making them vulnerable to the bacteria and fungi in the burrow and in the hot, sweaty confines of their mother’s pouch.

“Marsupials have evolved novel strategies to protect the young during this period,” Kathy Belov, a comparative genomicist at the University of Sydney and co-author of the new research, says. “It is by understanding these strategies that we can identify new ways to protect humans.”

Belov and her colleagues found that Tasmanian devils have six types of cathelicidins, compounds that are part of the innate immune system in many animals (humans have one type). Pups ingest these microbe-killing molecules while suckling their mothers’ milk, although cathelicidins are also found in the lining of the pouch and skin. “They essentially punch holes in the bacterial cell membranes,” Belov says.

The researchers tested the peptides against 25 strains of bacteria and six types of fungi. For this part of the research, the team made artificial versions of the compounds rather than relying on actual devils. “We would simply never be able to source enough milk,” Belov says.

Two of the cathelicidins were effective bacteria-killers, even knocking out pathogens that are resistant to some antibiotics (methicillin-resistant Staphylococcus aureus—aka MRSA—and vancomycin-resistant Enterococcus faecium). Another cathelicidin was effective against fungi.

The team is also investigating whether these immune compounds might also be used to treat the devil facial tumor disease that has decimated the wild devil population. “Early results look promising,” Belov says.

And Tasmanian devils may not be the only marsupials to make cathelicidins that we could harness to kill bacteria. “Each peptide we test is active against a different panel of pathogens – so there is a huge treasure trove of peptides in marsupials still to explore,” says Belov, who is also scrutinizing koala milk.