Is That Bug A Spy? 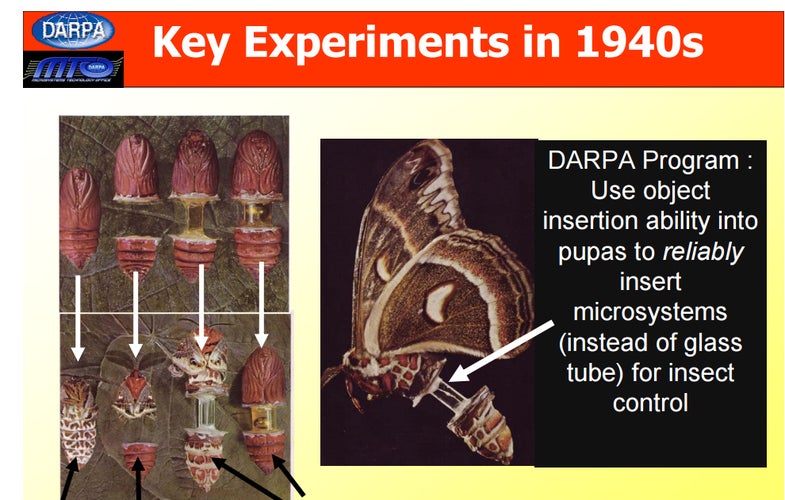 There are few better infiltrators that insects. Small, flexible, and ubiquitous, bugs are easy to overlook. Surely, one might think, there’s a way to turn that creepy-crawly ability into a military surveillance tool. DARPA, the Pentagon’s future-projects wing, has decades of experience looking into insects, or insect-sized robots, as spy machines, and not only that, this investigation predates DARPA.

The information comes to us from a Freedom of Information Act request by Susan Maret, a lecturer at San Jose State University who blogs at secrecy {fragments}. In July 2015, she requested information on “DARPA’s role in the development and application of Hybrid Insect Microelectromechanical Systems and microelectromechanical (HI-MEMS) systems,” as well as several other, related subjects. The fruit of that request is an 88 page document, most of it presentations from DARPA in 2006 and 2007 on the feasability of small flying robots.

The major of vehicles on display are palm-sized, large enough to carry batteries and fly yet still too big to be any use indoors. The power problem is a vexing one for small, electronic vehicle. The released documents include a couple comical illustrations. One shows an airliner carrying a battery almost the length of the fuselage, and another shots an airplane the size of a couple microprocessors. Naturally, DARPA tried to adapt an existing small, self-powered flying object into a spycraft.

They did this by installing microsystems into moth pupae, and letting the insects grow muscle tissue around the electronics. And that’s if the moths were lucky. Another attempt at moth electronics took moth pupae, cut them in half, and then inserted a clear glass pipe between the two halves. With the pipe in place, the moths completed development, showing one possible avenue for future scientists to insert electronics into the flying insects.

It’s a slide with this illustration that DARPA tantalizingly titled “Key Experiments In The 1940s.” DARPA didn’t come into existence until 1958, so the bisected moth experiment can’t be the experiment from the 1940s that’s alluded to by the title. Finding those specific documents will likely be trickier. The 1940s were not a calm decade, and after the war, a massive reorganization of America’s entire military structure likely let a few documents get lost in the shuffle. But if DARPA knows enough to allude to experiments in the 1940s, then some evidence must exist.

Any maybe it won’t even take a remotely controlled insect spy to sneak in and figure out what, exactly, it was.