Say hello to my wriggly friend 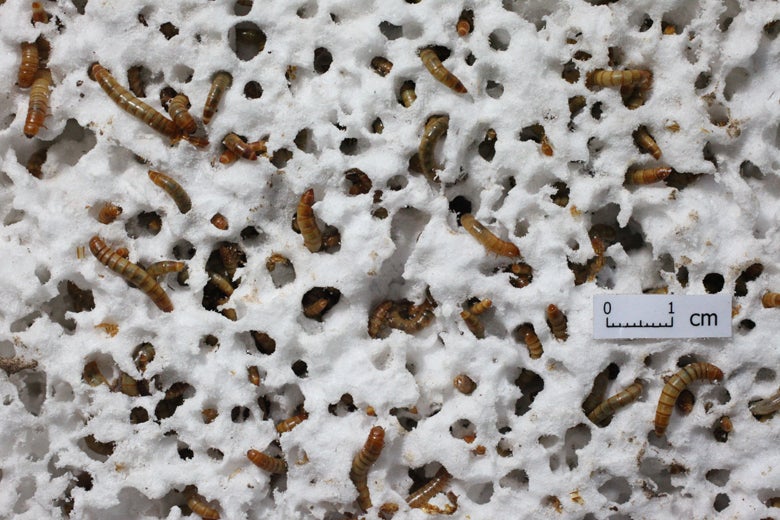 Mealworms are those squirmy guys you took care of in science class or fed to a particularly hungry pet chicken or reptile. And new studies from Stanford suggest that these creepy crawlers could be incredibly good for the environment.

Two papers, published in Environmental Science and Technology this week, found that mealworms can eat Styrofoam, turning a huge source of waste into compost that can be safely used on soil.

“Sometimes, science surprises us. This is a shock,” said Craig Criddle, who supervises plastics research at Stanford, in a press release.

Styrofoam, and in particular Styrofoam cups, are everywhere, and less than 10 percent of those used in the United States get recycled. In the first study researchers found that mealworms fed only Styrofoam were just as healthy as mealworms fed the more traditional meal (bran, in this case). Each worm could eat about a pill-sized portion every day.

In the second study focused on the mealworms’ gut microbes, which are able to break down the plastic safely. The researchers were able to turn this bacteria into a film that they applied to polystyrene, a form of the same plastic used to make Styrofoam. The bacteria were also able to eat through polystyrene, but at a much slower rate than the mealworms.

The researchers plan to continue looking into whether mealworms can safely break down other plastics, like those that make up car parts or microbeads. They also plan to look for the marine equivalent of mealworms, in the hopes that some sea creature with a strong stomach can help reduce the massive amount of plastic waste in the oceans.