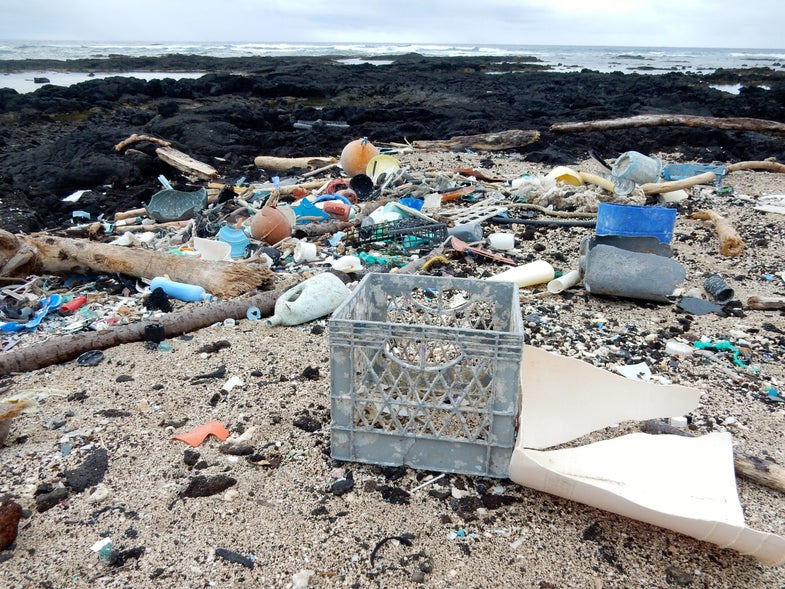 By now, you’ve probably heard that microplastics—that’s tiny bits of broken-down plastic—are wreaking havoc in the environment and spreading to even the most remote corners of the Earth. But a new study from scientists at the University of Hawaii at Manoa reveals that plastics—especially the most common single-use plastics—are also directly contributing to climate change here on land.

The study’s conclusion is a worrying one: the plastics that are an inescapable part of modern life are producing greenhouse gases as they decay, a contribution that will only grow as the billions of tons of existing plastics continue to degrade and new plastics are produced. The majority of that material will never be recycled, as American researchers documented last year, and will decay in landfills, fields, the ocean—you name it, plastic is probably there by now. And all of it is producing the greenhouse gases methane and ethylene in the process.

Researchers didn’t set out to make this discovery when the study began, says lead study author Sarah-Jeanne Royer, a postgraduate researcher at the university. Researchers at the university’s David K. Inouye Center for Microbial Oceanography were actually studying the natural production of methane by organisms in seawater when they realized their results were skewed by the plastic container the water was in. By the time Royer got involved, they had started testing different kinds of plastic for greenhouse gas production and studying the conditions under which they produced the most gases.

The team tested seven common kinds of plastic by exposing them to UV conditions similar to those they’d find if left outside or dumped in the ocean. They found that the highest production of greenhouse gases actually came from the world’s most common kind of plastic: low-density polyethylene, or LDPE. “We find a lot of that in Hawaii itself,” says Royer, who is involved in many citizen science and cleanup operations on the island. The reason there’s so much of this stuff (often literally) floating around is that it’s used for ubiquitous products like plastic bags, food packaging, and six-pack rings, among other things. Some of those, like playground slides, are much bigger and intended for longer-term use. But plenty of LDPE-based products spend only a short time on shelves and in homes before making their way into landfills and oceans.

They also tested pieces of plastic at different sizes, since as we all now know, as plastic decays it breaks into smaller and smaller pieces, often ending up in the bellies of animals. In the case of LDPE, Royer says, powdered plastic produced a whopping 488 times more methane than 0.2-inch pellets. “As the surface area is increasing, the methane production goes up,” she says.

The tests also revealed another grim finding. Although she is an oceanographer, Royer’s work ended up having greater relevance closer to home. She found that plastics exposed to conditions similar to those on land produced far more greenhouse gases than those in the ocean.

Plastic in the ocean is “very worrying,” says Royer, “because it’s a threat for wildlife and it’s a threat for navigation, for invasive species, so it has a lot of negative effects.” But then, she says, think of everyday life. “If you think in terms of the amount of people on Earth and the amount of plastic use… this is huge. If it doesn’t make a significant difference from the ocean, it will surely do for the continents.”

In terms of climate change, the exact size of this effect has yet to be determined, but given how much plastic is out there, it may be significant, study coauthor David Karl said in a press release. “Due to the longevity of plastics and the large amounts of plastic persisting in the environment, questions related to the role of plastic in the [methane and ethylene] global budgets should be prioritized and addressed by the scientific community,” the paper concludes.

“It’s a very unusual take on plastic pollution, in linking two very dramatic events that are occuring in present days,” says Dimitri Deheyn of Scripps Oceanographic Institute. Deheyn, who was not involved with the study, says the results show that plastic on land can be just as toxic as that in the ocean, simply in different ways. Plastics in the ocean pose a hazard to marine wildlife and transform ecosystems, while those on land, decaying at a faster rate, contribute to climate change. Deheyn says he wouldn’t be surprised if the contribution is significant, perhaps even five percent of anthropogenic greenhouse gases. He’d like to see more study, and see climate modellers incorporate the relationship between plastic decay and climate change into their calculations.