Earthworms can break down bioplastic, for better or for worse 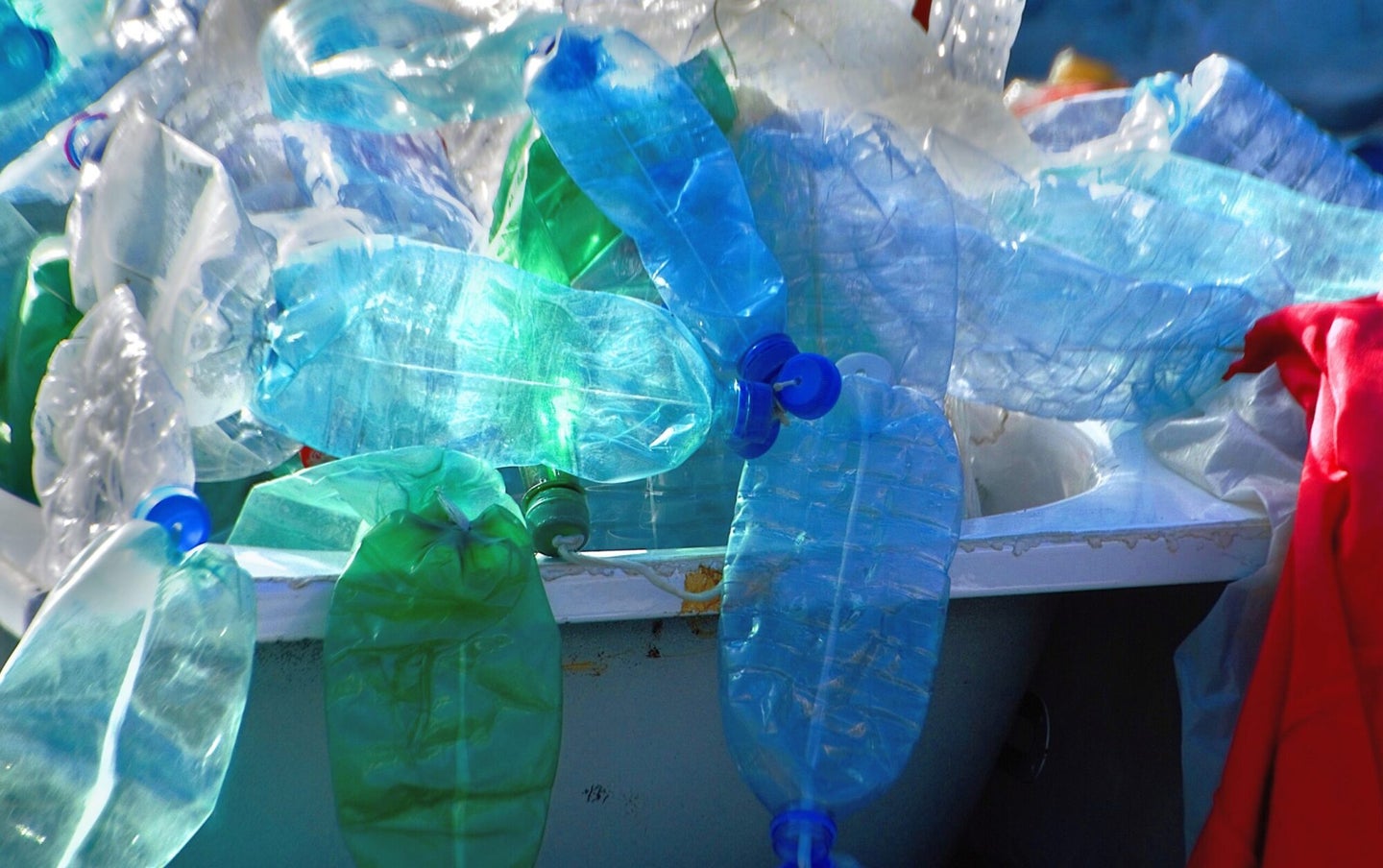 American landfills are packed with plastic containers and bottles. Would this picture look different if the bottles were bioplastic?. VIVIANE6276 / Pixabay
SHARE

In 2018, 27 million tons of plastic were dumped into American landfills. A majority of this waste was containers and packaging: bags, sacks, or bottles. Yet even when sustainable-minded consumers try to avoid plastic packaging while shopping for necessities, it can prove difficult.

Bioplastics have been touted as a potential remedy to the problem of disposable packaging, as they offer a transition away from petroleum-based plastics, faster decomposition, and potential fertilizing material. But are there any downsides to putting them in the environment? In a study published today in the journal Environmental Science & Technology, earthworms are seen to have a strong capability for consuming bioplastic derived from polylactic acid (PLA), which is typically made from plant-based sugars. Lei Wang, a professor at Nankai University, compared how earthworms interacted with various forms of plastic, as well as the annelids’ ability to break the substances down. What he found, however, was that the process doesn’t just end at decomposition.

[Related: Microplastics are everywhere. Here’s what that means for our health.]

Unlike composting, which turns waste into nutrient-rich dirt, plastics that sit out in landfills in the wind, sun, and water break down into smaller particles called microplastics. These pieces are then easily carried into oceans, food, and soil.

Animals often ingest microplastics through several vectors, but few get as much exposure as soil-loving earthworms. As they tunnel, they eat the dirt to digest the organic matter. If the soil is contaminated with plastic, it can become a piece of the worms’ diets. While this has been documented in many cases, there’s less research available on the impacts of bioplastics.

That might be in part because the category is still fuzzy. “A bioplastic is a polymer that is made from fully bio-derived constituents and can be processed the same way that you process a regular plastic,” says Damien Guironnet of the University of Illinois-Urbana Champaign who was not involved in the new research.

But the term bioplastics can also refer to biodegradable forms of plastic, notes Ting Xu, a chemist at the University of California, Berkeley, who also didn’t contribute to the paper. She says that the definition is still not completely standardized. Because of this discrepancy, Wang uses the term “bio-based plastics” in his study.

“Some researchers define bioplastics as ‘a broad category of materials encompassing bio-based, biodegradable, or both bio-based and biodegradable plastics,’” Wang writes over email. “In my mind, ‘bio-based plastics’ is a more accurate statement. In a sense, all plastics may be biodegradable, but to varying degrees.”

At the same time, a polymer derived from natural materials might not necessarily decompose by itself, leading to the potential for earthworms to find bioplastic particles in their diet. Wang says that existing research does not support a significant difference between bioplastics and petroleum-based plastics in terms of environmental pollution, even though degradable and non-degradable plastics present different levels of risk.

“At present, the degradation of most biodegradable plastics in the natural environment is not as fast as people think, because such design will reduce their durability,” Wang explains. “But in general, they have a higher affinity for microorganisms than non-degradable plastics. This may imply differences in ecological and health risks associated with microorganisms.”

To test which plastics the earthworms prefer to digest, Wang and his team planted four materials in a test chamber: a fully fossil fuel-based plastic, a fully degradable and bio-based plastic, and two semi-synthetic plastics. Earthworms appeared to avoid the two semi-synthetic plastics, which were made with cellulose, while they tended to approach soil containing both the bio-based PLA plastic and fossil fuel-based PET plastic. Between the two, the invertebrates were able to break down PLA much easier than PET. This did not surprise Xu, who explains that the arrangement of the polymers determines decomposition abilities.

“The PLA is always easier than PET [to break down],” Xu says. “There are multiple reasons behind that. One is even though both are ester bonds, there are natural enzymes that can degrade PLA, because they want lactic acid as a food.”

In fact, PLA might break down too easily, making it dangerous in natural environments. By the end of their 10-day-long ingestion tests, Wang and his team found that most of the PLA had been degraded into nanoparticles, which are up to 1,000 times smaller than a micron. This suggests a potential ecological risk, Wang says—a concern mirrored by Xu.

“They can be left behind as particles, and they are long-lasting,” she says. “It doesn’t matter if they are biodegradable. They will still act as a microparticle.”

Microplastics have been linked to potential health risks in recent years, partially due to additives like hormone-disrupting BPA, carcinogenic phthalate, and toxic heavy metals. But bio-based microplastics and nanoplastics are understudied, a fact that Wang notes in his study. Guironnet agrees that the impacts of bioplastics on the environment are complex, ranging from weighty carbon footprints to material sourcing.

“The impact chemicals have on the environment is really complex,” he says. “It’s not as simple as ‘bio-based is better than oil-based.’”

Wang hopes to spur further research on the breakdown of bioplastics in soil. While it’s clear that earthworms can digest plastics made from PLA, it is unknown if they gain any nutritional value from it. The life cycle of bioplastics is an emerging question; it’s important to understand how the earth’s ecosystems are adapting to them, Wu says.