The purpose of the high-energy laser is to provide a defensive weapon against incoming threats. Here's how it all works. 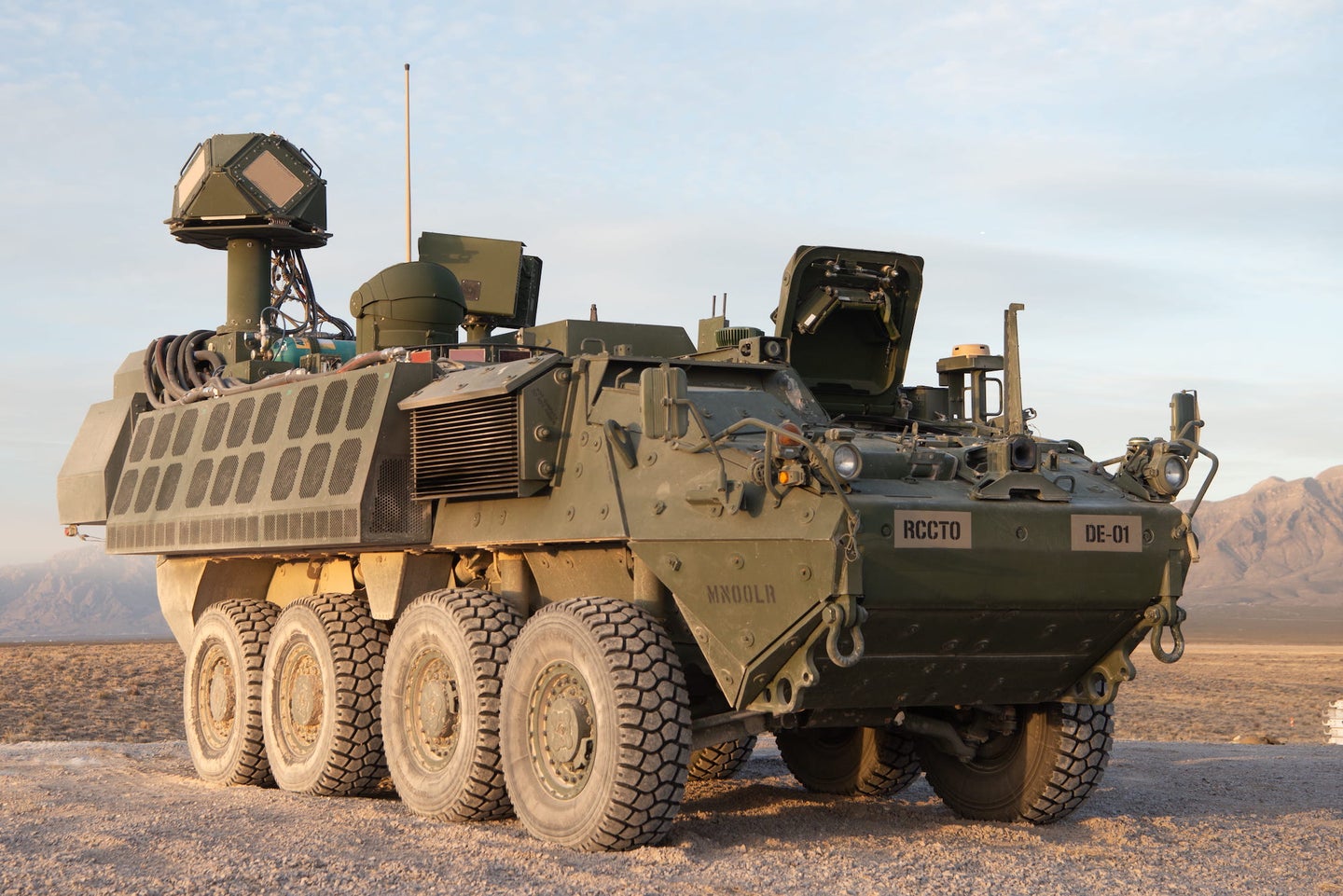 The laser on the Stryker combat vehicle. Courtesy Raytheon / US Army
SHARE

In the sun-scorched desert of White Sands Missile Range, a Raytheon-built laser weapon mounted on an armored vehicle shot down multiple mortar rounds over four weeks of testing, the company announced May 16. The testing, part of an Army program to develop new kinds of defenses against flying projectiles and other threats, also involved the laser defeating a range of drones. The demonstration is part of a growing effort to ensure that on future battlefields, troops can be protected from the range of attacks they are likely to face.

Raytheon describes its directed energy weapon as a 50 kilowatt-class high-energy laser. The company worked with defense contractor KBR’s subsidiary Kord to integrate that laser on a Stryker combat vehicle. Strykers are eight-wheeled armored transports, operated by a crew of two and with room for 9 troops to ride inside. The body of the vehicle is flexible enough that the US Army has adapted it for a variety of roles, including as the base platform for an array of already existing anti-air weapons.

This role is called “Maneuver-Short Range Air Defense,” or M-SHORAD, and it is currently performed by Strykers featuring a turret that can launch Stinger anti-air missiles and Hellfire missiles, both of which can be used against tanks and aircraft as well. This is in addition to a 30-mm cannon and a regular machine gun, as well as sensors that help it find targets.

[Related: The US is looking for a new anti-air missile]

Those weapons are all useful against many known threats, like attack helicopters and low-flying jets, but the Army itself acknowledged this as a stop-gap to a more long-term solution, dubbing the Stinger-armed Strykers as “IM-SHORAD,” with the I for “Interim.”

What the Army is aiming to field, and what the Raytheon demonstration showcased, is a durable anti-air vehicle that can stop not just drone attacks, but can also hit mortar rounds, like in the White Sands demonstration, and also stop rockets and artillery fired against US forces.

The military has long been interested in finding tools and weapons that can protect forces as they move from attacks in the low altitudes where drones fly and mortar rounds arc over hills towards their targets. This is a hard problem: stopping rockets, artillery, or mortar attacks from hitting troops, vehicles, or bases requires a system that can detect the incoming attack, plot the trajectory of the projectile, and then use a weapon to try and destroy as many of those projectiles as it can in time.

For ships and bases on land, counter-rocket, artillery, and mortar defense already exist in the Phalanx close-in weapon system used on ships, or the C-RAM variant used on land. (C-RAM is “Counter-Rocket Artillery Mortar.) These systems pair sensors with bullets to shoot down incoming projectiles, an effective method but one where the cost of fired bullets can add up over time.

Laser weapons are designed to offer interception at rates much cheaper than missiles, and even cheaper than bullets. “With an effectively infinite magazine and near-zero cost per shot, [High Energy Laser] is now the proven answer to asymmetric threats like drones and mortars,” Byron Bright, president of KBR Government Solutions said in a release.

A laser system takes a lot of work to develop, from ensuring the beam is powerful enough to burn through what it’s targeting quickly, to pairing it with sensors that can find but also track targets until they are rendered inert or harmless. Once set up, however, laser systems promise lower costs per firing, with electrical power fueling the shots instead of the material of bullets or the sensors and material of missiles.

Many previous military laser weapons have been mounted on ships, where they can draw electrical power from the massive generators on board. Strykers are a much more confined space than a seagoing vessel like the USS Ponce, and getting it to reliably produce a beam of 50 kilowatt hours takes a tremendous amount of power storage and ability to discharge rapidly.

In 2013, Boeing demonstrated a 10 kWh high energy laser system, mounted in a truck the size of a shipping crate. Fitting more power into a smaller, constrained shell is essential for creating a more useful laser. The greater the power of the beam, the faster it can burn through a given drone, or mortar round, or other object. But it also increased the importance of such a defensive system working. Putting that much electrical power into a vehicle requires batteries and possibly capacitors, which can explode in catastrophic ways, especially if under fire in combat.

Still, in the absence of a reliable way to shoot down small armed drones or prevent artillery from hitting an armored column on the move, a laser-armed Stryer could prove useful all the same. In the same announcement as the successful demonstration, Raytheon said it is preparing to deliver four laser-armed Strykers to Army units later this year.

Watch a video about the tech, below.