The showboating video is breathtaking, but shows poor tactics. Here's why. 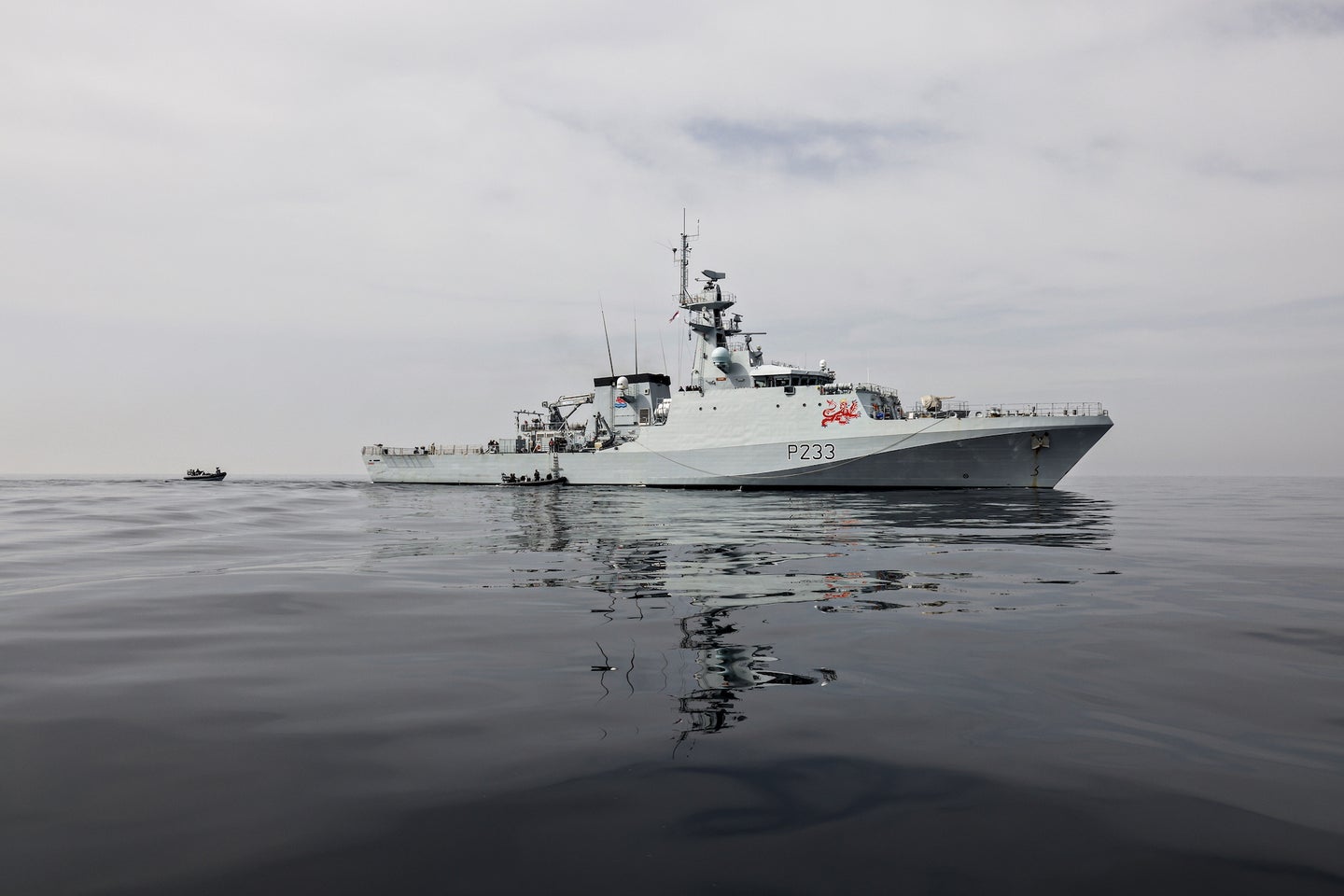 In an instant, the jetpack’s engines roar to life, and it flies. From his perch on the front of a small boat, the jetpack pilot launches into the sky above the sea, before ultimately landing on the upper deck of the HMS Tamar, a British patrol vessel. Once on board, he lowers a rope ladder to the crew on a boat below, who then scales and boards the warship the conventional way.

Released May 1, and with just a brief runtime, the video showcases a novel jetpack, portraying a version of the future of naval warfare—and then undermines that same promise. It is a beautiful gimmick, but also a sign of the real limitations of jetpacks as a military tool.

Made by Gravity Industries, the jetpack is really a system of engines, worn like a gangly exoskeleton. In each of the pilot’s hands is a thruster, used for balance and steering. On back is the main thruster, responsible for hurtling the pilot forward in the sky. Gravity lists a flight speed of 55 mph, though boasts of a record top speed at 85 mph. Empty, the system weighs 60 pounds. To fly, it takes either diesel or jet fuel, which it converts into enough thrust and power for between 5 and 10 minutes of flight, the company claims.

[Related: The US army wants its own hoverbike, again]

In the demonstration, it works. The pack propels a person through the sky, and the human can steer the jets well enough. Later in the clip, like out of science fiction, we witness three jetpacked people land on a ship from different directions, as if they were super-powered.

First Sea Lord Admiral Tony Radakin, head of the United Kingdom’s Royal Navy, seemed pleased enough with the demonstration. On May 1, 2021, he shared a shorter clip of the flights around the Tamar, tweeting: “As the @RoyalNavy embraces technology and innovation, @hms_tamar trials the latest game-changing kit with the @RoyalMarines.”

It is hard to understand what game, exactly, this jetpack changes. On first viewing, it reads as a novel approach to an assault, a low-flying vulnerability exploited thanks to a stunning display of technology.

But the tech has its drawback. For one, the jetpack is loud. Maybe not louder than the whole of a ship at sea, but loud enough to alert anyone on deck to its approach. The person flying is mostly upright, presenting the majority of their torso as a viable target to any armed defenders. Rifles and machine guns, the most effective anti-jetpack countermeasures, are already abundant on ships. Given the distribution of thrust and the layout of the jetpack system, a pilot trying for a narrower flight profile (think Superman soaring horizontally) would likely risk unstable flight, and would still have to transition to a vertical orientation to land.

[Related: No jetpacks. Zero flying cars. Where is the future we were promised?]

Finally, when it comes to delivering a ladder over the side of a ship, a rope with a grappling hook could do it better. Every part of the flashy assault would be stealthier, cheaper, and more reliable if it were done in a more traditional way, without bringing a jetpack into the equation.

In a separate demonstration, this time with the Netherlands Maritime Special Operations Force, the same jetpack system launches from a small boat, lands and deploys a ladder, and then appears to take part of a simulated search and clear operation. It is compelling footage, and also far more Mission: Impossible than plausible. Even if the jetpack is useful for getting a ladder on the side of a ship, the person with the jetpack makes a larger target than their companions, to say nothing of the risk of getting into a firefight with a tank of combustible fuel strapped to their back.

Militaries have explored small personal flying machines for over a century. The promise is obvious: With so much of the world designed for navigation in two dimensions, soldiers equipped to fly even short distances could bypass defense, surprise enemies, and win battles out of nowhere. It is a compelling vision, and jetpacks remain a staple of combat games set in the future.

Yet military interest in jetpack demonstrations should not suggest an imminent future of infantry combat in three dimensions. Loud, expensive, and with short flight durations, jetpacks make for great spectacle. But they are less useful for any gun battles, to say nothing of sustained fighting.

In January, months before the First Sea Lord boasted of jetpacks as technology innovation, the Tamar turned to a different flying machine: the hand-tossed Puma drone, which can survey 270 square miles of ocean in flights lasting up to two and a half hours.

Remarkable as jetpacks may be, the truth is there’s far more capable, cheaper flying machines, that can do almost everything jetpacks once promised. They just cannot do any of it with a person on board.