Unmanned vessels like Saildrone and MANTAS can expand the Navy’s understanding of the oceans as potential battlefields. 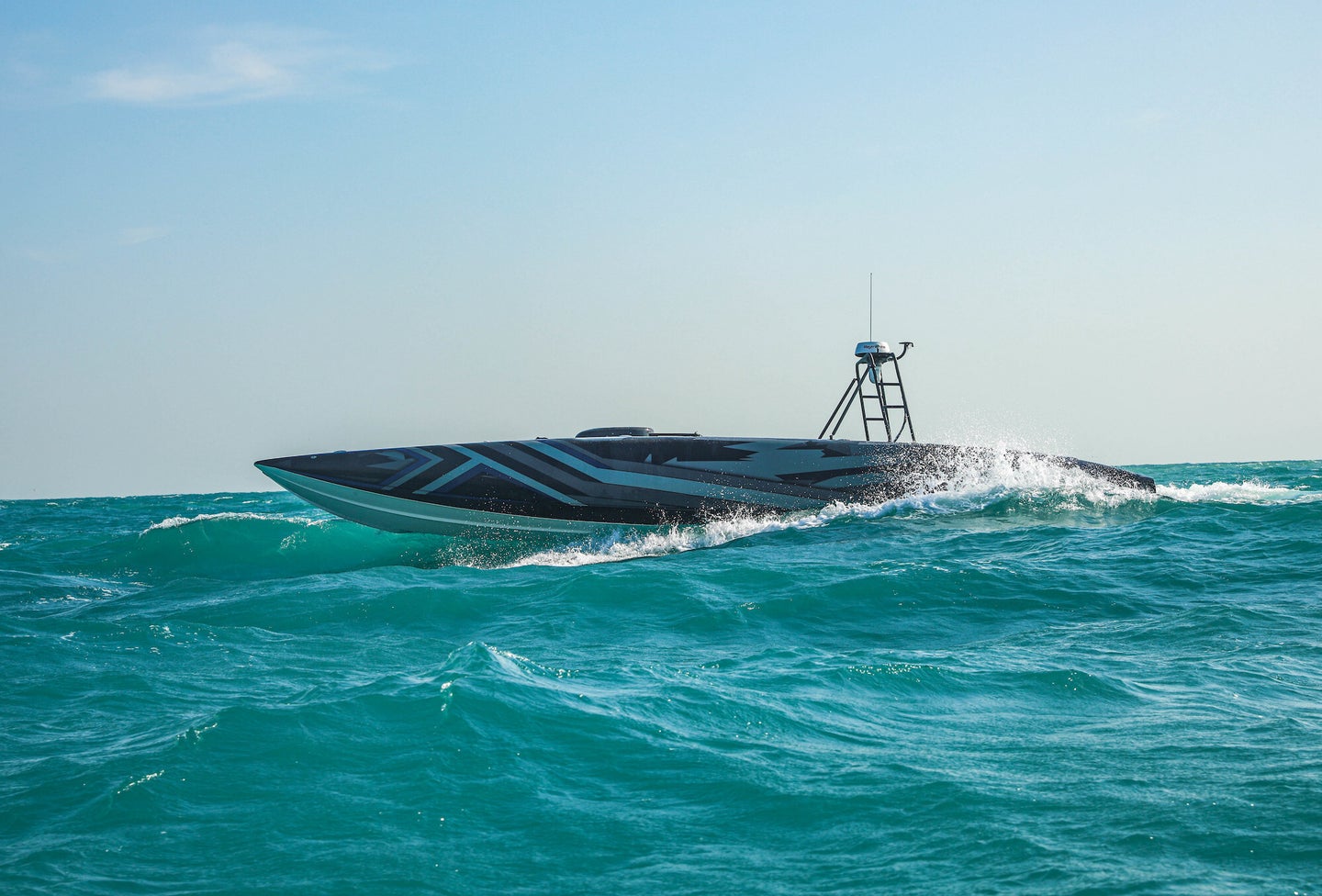 The sea is vast, and full of secrets, and the US Navy is in the business of knowing them. This fall, in both the Red Sea and the Persian Gulf, the Navy experimented with new robotic boats. These machines, the Saildrone and MANTAS T-38 unmanned surface vessel, are forays into launching future flotillas of autonomous sensing machines, all of which promise to expand the scope of what the Navy can know about the waters it patrols.

The Saildrone Explorer looks like a windsurfer without a human clinging onto it. With a 23-foot-long body and standing at 16 feet tall, the Explorer is mostly sail. It draws electrical power from the sun and propulsive power from the wind. Under sail power, the drone travels between 2 and 7 mph. These vehicles can sail for long distances and durations, with the company claiming that the drones can operate for up to 12 months on a mission before it needs to come ashore for maintenance.

Saildrones can be outfitted with a range of sensors. The version of the robotic surfer that Popular Science selected for a 2021 Best of What’s New award was used by NOAA to track hurricane winds. The drones can carry sensors for wind speed and direction, for air temperature and humidity, for measuring the salinity and magnetic field of the ocean surface, and even for  detecting fish biomass and mammal presence under the surface. In addition, the Saildrones can record above-the-surface video and use machine learning algorithms to detect targets. This is one of the main features the Navy is interested in.

The cameras and processing on the Saildrone “deliver real-time, visual detection of targets that are otherwise not transmitting their position,” the company claims, which can then be paired with radar, acoustic sensors, and other detection systems to confirm a sighting.

In November, the Navy announced that it would base these Saildrones out of Jordan’s naval base in Aqaba, on the Red Sea.

[Related: Watch a team of robots launch and target a missile]

“We are working harder and smarter to achieve maritime security, in all domains – surface, subsurface, and over the sea,” Hisham Khaleel Aljarrah, commander of the Royal Jordanian Naval Force, said in a joint statement with the Navy. “The Red Sea will witness a significant increase in monitoring and power projection to maintain stability and security within international waters.”

Michael Brasseur, head of the Navy task force for robots and AI managing Saildrone, described in a statement the robots as leveraging “machine learning and artificial intelligence to enhance maritime domain awareness,” which then extends “the digital horizon with a sustainable, zero carbon solution.

That’s a jargon-dense phrase. In practice, it means that having cameras and other sensors on the drones extends the area in which the Navy can know what is going on. With wind-driven propulsion and solar-powered electronics, the Saildrone suggests a lower impact operation, though it is too early to say if these robots are going to replace existing human-crewed vessels. Instead, the adoption of robot boats should be seen as expanding on existing naval operations, with little increase to impact.

Saildrone is one of several Silicon Valley products to be pursued by the Department of Defense this year. Lux Capital, the venture capital group that backed Saildrone, met with senior defense officials earlier this year. Lux boasts specifically of Saildrone as an alternative to more-expensive crewed vessels, highlighting an estimated $80,000/day operating cost for traditional scientific research. It’s hard to compare directly without a public operating cost per day figure for Saildrones, or how much operational capability is lost in the transfer from a human crewed vessel to a robotic one, but it’s worth noting that the Saildrone is being marketed on a low cost of use as well as the abilities of the machines.

On the other side of the Arabian Peninsula, in the Persian Gulf, the US Navy’s 5th fleet experimented with MANTAS robot boats. The individual vessels are named for their length (the T-12 is 12 feet long and the T-38 is 38 feet long). With both fully electric and diesel/electric hybrid options, the MANTAS robot catamarans are sensor platforms designed to discover danger and move quickly. The T12, which the Navy tested in October, has a burst speed of up to 34 mph, and the T-38, which the Navy tested this month, can go over 90 mph.

MANTAS can carry a range of sensors, from camera pods to hydroacoustic systems, allowing the vessels to look for objects and action in the sky, on the surface of the water, and under the sea. In the tests with the US Navy, the vessels mainly followed autonomous directions for monitoring.

Between the Saildrone and the MANTAS, the Navy is clearly looking at ways to know more about the seas in which it operates, without committing to sending more sailors on patrol. Robots like these have the potential to be a force multiplier, expanding the scope of what can be known without committing additional labor. While uncrewed vessels may be more vulnerable if found by hostile forces, that vulnerability can actually be an asset. A sensor system that’s been disabled is a source of information in its own right, and the ability to learn of attacks without having to first suffer the loss of human life is a good thing.

It remains to be seen how these robots will be employed at sea. Monitoring for potential threats and mapping the underwater terrain are both likely early uses. It’s possible in the future that such machine assessments of danger could be directly integrated into targeting and firing controls of existing military vehicles, with the robots acting as spotters for more distantly-carried weapons on other vessels.

For now, investment in the boats show a commitment to understanding oceans as battlefields, ones patrolled on the furthest edge by robots.

Watch a video of the MANTAS T-12 here.