U.S. Navy To Guard Old Ship With A Freaking Laser 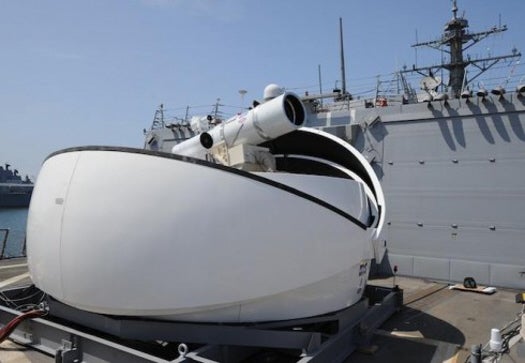 One of the U.S. Navy’s oldest ships is about to get a lot more futuristic, thanks to a laser.

The Navy plans to retrofit the USS Ponce, first commissioned in 1971, with a laser weapons system early next year. The system works by using heat to blast through boats and deflect unmanned drones.

The advantages? It’s fast, deadly, and incredibly cheap. So cheap, in fact, that it is estimated to cost about $1 a shot. That’s less than a third the wholesale price of a .50 caliber bullet used in Navy machine guns. (The laser system itself is the result of $40 million in research and development, so that part isn’t cheap. But the projectile sure does cost virtually nothing.)

Why the Ponce? Ponce spends time near Iran working as a base and might be particularly vulnerable to swarming attacks by small, fast Iranian boats. That all changes, of course, if it is guarded by a freaking laser.