France’s new warship will have an inverted bow and 2.2-ton radar panels

Plus a fancy communications network for smartphone-dependent sailors. 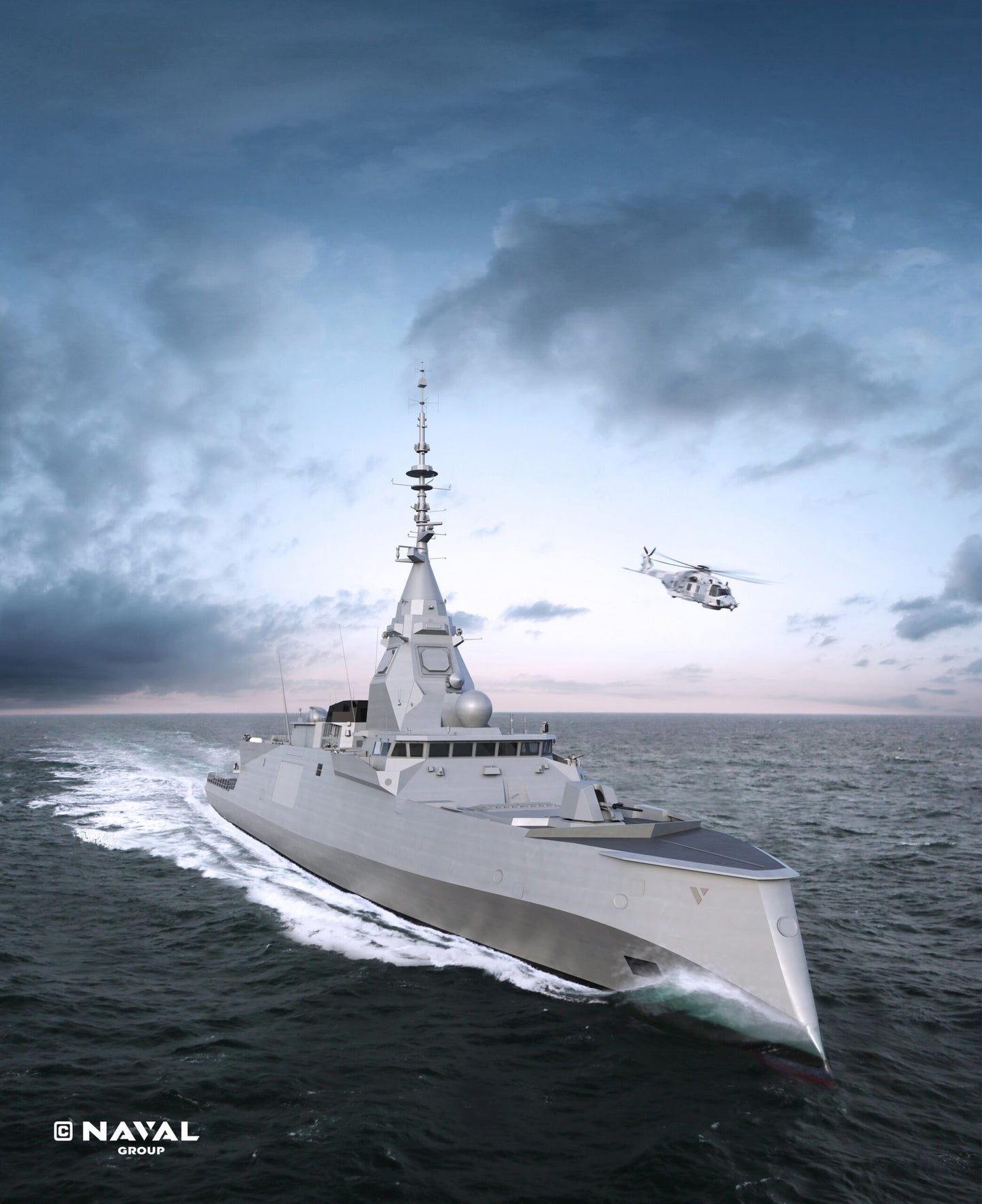 A rendering of the French FDI ship. Naval Group
SHARE

In October, France’s Naval Group began construction on a new type of ship: the defense and intervention frigate. It’s known by its French initials, FDI, which stands for frégates de défense et d’intervention. The first of five such ships, the Admiral Ronarc’h (pronounced “Ronar”), will be delivered in 2023, and the last in 2030.

Like most frigates—vessels between 2,200 and 5,500 tons—its main missions will be to look out for threatening ships, as well as aircraft and submarines. The 4,960-ton, 394-foot FDI will also be outfitted to handle what the military call asymmetric threats: dangers posed by the likes of terrorist groups, drug cartels, or smugglers—in short, anyone who is not backed by a state. Like traditional frigates, it will patrol and control France’s vast maritime exclusive economic zone—at 4,513,920 square miles, it is the biggest in the world. It will also be able to defend itself with anti-ship and anti-aircraft missiles, light torpedoes, and guns.

You’ll notice that it looks a little different with its reversed bow. That means it is longer at the waterline than it is on deck—the opposite of a more traditional vessel, like a cruise ship, with a bow that sticks out far over the waterline below.

An inverted bow comes with distinct advantages: it reduces both the ship’s radar signature and its drag through the water, allowing it to slice through the seas smoothly, and ensures it can hold a speed of up to 27 knots (31 mph). While the design and use of warships with an inverted bow actually dates back to the late 19th and early 20th centuries, the configuration has a downside: it tends to push the ship lower under the waves, rather than riding over the top of them, resulting in huge amounts of spray—and very wet decks. That’s bad for ships with delicate equipment on them. But for modern ships like this new frigate, with the expensive equipment under cover or out of reach of the splashing waves, the inverted bow makes sense. It’s not the only 21st-century military ship with such a design: the American Zumwalt-class destroyers have them too.

The Admiral Rorac’h will be able to sail for 5,754 miles before needing to replenish its diesel fuel, but as it can only hold 45 day’s worth of food and drink for its 150 or so crew, it won’t be able to stay at sea for longer than that.

One of the basic requirements that France had for the FDI ships was to make sure sailors could continue to communicate with family and friends as easily as they can when at home. Because like many other Western navies, France’s is having trouble recruiting young people who are no longer prepared to spend weeks, if not months, out of contact with their nearest and dearest.

“We had to keep in mind that the sailors who will be on this ship in 2023 are 16 years old today and that the coms system they will be using must be intuitive, familiar, agreeable to use, whilst at the same time making communications more secure against cyber attacks,” says Pierre Krotoff, naval communications marketing manager at Thales. “Our remit was to make it as easy for on-board personnel to communicate as it is when they are at home on dry land, and yet remain within a secure environment because when the ship’s captain is communicating with the naval chief of staff, nobody else should be able to hear that conversation.” (The ship will also have a dedicated operations center for detecting and dealing with cyber threats.)

Thales’s answer was to create COMTICS, a communications system that is tailored for sailors at sea with smartphones. It allows them to use their phones and the internet exactly as they do at home, on the condition that the military situation at the moment permits it; it’s also secure from hacking and cyber attacks. Sailors can use their phones to communicate with others via WhatsApp, for example, and will also have access to specific apps to discover what the grub for the day is in the canteen. The vessel will have a 4G antenna cable on board to allow sailors to connect to a network.

The other major novelty is the SeaFire surveillance and fire-control radar. It not only indicates what is in the air or on the sea surface within 300 miles, but also provides the information a weapons system needs to hit its target. Gone are the half-domes and spinning horizontal boxes you may have seen on warships in the movies, or at the dock. They’ve been replaced by four giant flat panels, one on each side of the mast. For the FDI, each panel measures about seven by eight feet and weighs 2.2 tons.

“This flat panel technology has been around for about 20 years,” says Rémi Mongabure, surface radars bid director at Thales. “But the novelty with SeaFire is that each of the 1,000 elementary dipoles [the basic construction block from which radars are made] in each panel are individually managed with software.” What that means is that if a few dipoles break, the radar itself should still be able to function just fine. When the ship returns to port, the malfunctioning dipoles are easy to spot and then change, because they flash.

There are two main advantages to a flat-panel radar. The first is that it provides 360-degree coverage, whereas with a mast-mounted half-dome or box radar the mast itself blocks the view. The second is that there are no turning parts, so there should be zero at-sea maintenance for the SeaFire, making it more reliable.

The ship will also carry a 1,500-pound naval drone, a 12-ton helicopter, and be able to deploy special forces and two commando boats. It will also be heavily armed with Exocet MM40 B3C anti-surface missiles, Aster 15/30 anti-air missiles, MU90 antisubmarine torpedoes, and artillery.