What Does a Baby Find Cute?

Among the handful of words my baby definitely recognizes, baby ranks high. He goos and gahs over pictures of baby... 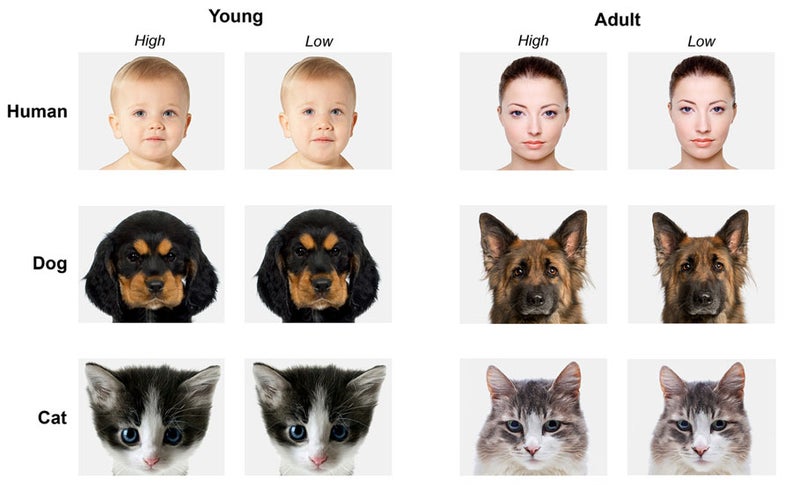 The baby schema concept was originally proposed as a set of infantile traits with high appeal for humans, subsequently shown to elicit caretaking behavior and to affect cuteness perception and attentional processes. Marta Borgi
SHARE

Among the handful of words my baby definitely recognizes, baby ranks high. He goos and gahs over pictures of baby faces, and he studies books of baby animals.

It’s been known for a while that human adults show a positive response to infantile stimuli, both in images and real infants. This phenomenon – also known as the “cute response” – is said to encourage caregiving behavior and decrease aggression in human adults and may be part of a deep evolutionary past.

But how young does this “cute response” start? In a study published last month in the journal Frontiers in Psychology, researchers in Rome and at the University of Lincoln in the UK used eye-trackers to understand the effect of the baby schema on visual attention in kids as young as 3.

They used 120 pictures of adult humans, babies, dogs, puppies, cats and kittens, with the pictures stretched and manipulated to make them more stereotypically cute — a round face, high forehead, big eyes and a small nose and mouth. They tracked the gazes of British children between 3 and 6 in two experiments, and the kids also rated the pictures according to cuteness.

The results showed that all the ages of kids responded differently to baby facial features, and even at 3, kids can identify baby-like characteristics in different species. The eye-trackers showed where the kids looked to find the distinctions of cuteness.

Not all species were the same in the cuteness realm, though. Children rated images of adult dogs as cuter than both cats and humans. “Dogs, the most common pet species both in Europe and in US, confirm to be a very attractive stimulus for humans, including very young children,” says Marta Borgi, a doctoral student in behavior neuroscience at the Istituto Superiore di Sanità in Rome, Italy and co-author of the paper. “Part of their appeal appears to be due to their cute aspect, although an important role has played by their ability to communicate with humans and to form a bond with them.”

Other researchers are looking into the link between dogs, cuteness, and safety – Lincoln BabyLab is conducting both research projects and educational programs aimed at preventing dog bites. They hope to understand how babies balance an attraction to dogs and the potential for danger.

The children in the study also rated puppies and kittens as cuter than other babies, showing a very early interest in other species. Borgi and her colleagues are looking to do the experiment in newborns next, to find if this preference for cute baby faces extends to the first months of life.