The automaker hopes to lead the industry in a revolution, and repair its own image in the process. 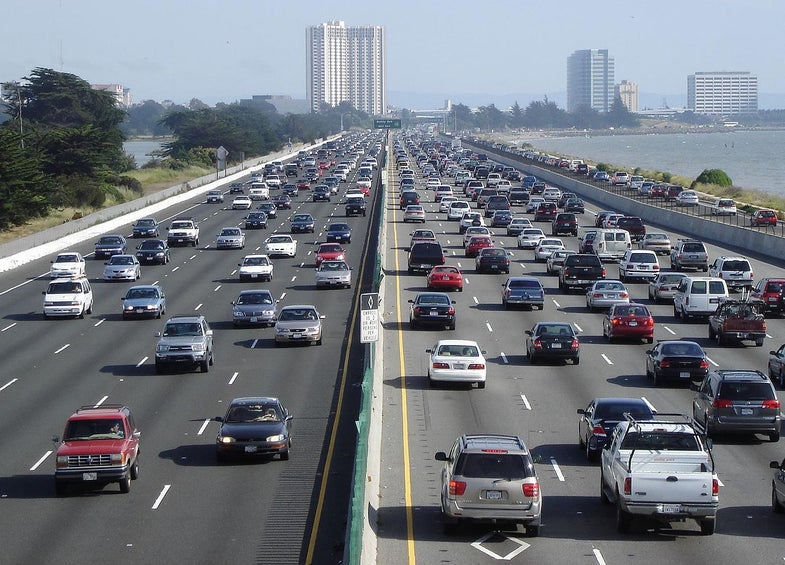 “Impatient for the future to arrive.”

That’s how Mary Barra, CEO of General Motors, described her company in an address to the Intelligent Transport Systems Word Congress in early September. She was referring to a technology that could cause such a revolution in the way people get around that experts compare it to the interstate highway construction of the 1950’s. It’s expected to clean the air, speed up your commute and potentially save your life.

No, it’s not self-driving cars.

The technology comes with a long, technical name that seems designed to make eyes glaze over: vehicle-to-vehicle/vehicle-to-infrastructure communications, or V2V/V2I. Its function is to make cars talk to one another and to the road.

While automated cars have captured the imagination of the public as they zip around California like time travelers from a futuristic Google-branded utopia, a quiet consensus of industry and policy leaders have been pushing forward on this other, more practical advance. V2V/V2I uses technology that already exists, and its potential impact on the average driver is well understood. Most of its fundamental components are sold in some form or another at Radioshack.

All that needs to happen to put connected cars on the road is for a company to produce them. That’s where GM comes in.

At the ITS world summit, Barra announced her plan to jump start the “high-volume rollout of vehicle-to-vehicle connectivity” with the 2017 Cadillac CTS. The car will be the first V2V/V2I production vehicle on the road.

Exactly what information the CTS will broadcast about itself as it drives is still unknown. There is enormous potential for innovation, and for GM to be a leader. But for that to happen consumers, the government, and other automakers have to get on board.

The Cult Of The Self-Driving Car

Google’s self-driving cars have grabbed far more headlines than vehicle-to-vehicle and vehicle-to-infrastructure communications in the last several years, for obvious reasons. Robot cars seem to promise a sci-fi world. Want to read a book on the way to work? Go ahead! Need to get from New York to Los Angeles? Just hop in the back and nap as your digital chauffeur takes the wheel. But most experts agree a commercial rollout of fully automated tech is still far in the future, and there are many technological hurdles still to overcome. (Not to mention the estimated cost of a commercial automated system: $100,000 plus the cost of the car, or about three to four times what a flesh-and-blood chauffeur can expect to make in a year in New York City.)

The vision of fully self-reliant cars is beguiling. In the same speech where Barra announced the connected 2017 CTS, she touted a plan to include “Super Cruise” technology — a version of cruise control that can make adjustments to a car’s speed and heading on the highway — in a still-unspecified 2017 Cadillac model. Unlike the CTS, it was huge news. In the Los Angeles Times, the story was “GM will introduce hands-free, foot-free driving in 2017 Cadillac.” Engadget wrote “GM: A Cadillac that can (almost) drive itself is coming in 2016.” Bloomberg News put out a video with the same apologetic aside: “Cadillac Super Cruise: GM Bets on Self-Driving (Almost).” Plug “GM self driving” into Google and discover hundreds more examples.

Comparing Super Cruise to self driving technology is a bit like comparing your home rocket kit to the Saturn V. Sure, they both spit fire and go up. But is it fair to say your home rocket “almost” made it to the moon?

Even GM representatives acknowledge that there’s a big difference between the Super Cruise system and a true self driving experience. In the end, it’s still up to the driver to keep the car moving in the right direction, to merge between lanes, and to get on and off at exits. The technology is exciting, but Super Cruise will impact drivers more like a 21st century cruise control upgrade (which it is) and less like an intelligent, self-guiding automaton (which it isn’t.)

So what’s keeping self-driving tech out of consumer vehicles? The obvious problem is price. No one knows how to bring down the per-vehicle cost of the hardware involved. (Though there have been some creative ideas.)

Another issue is simple aesthetics. GM spokesman Jim Cain told Popular Science that figuring out how to include the War of the Worlds-tripod-looking full-coverage LiDAR system that serves as the Google car’s eyes in a traditional car design is a major hurdle to overcome on the way to production. “No one wants to drive around in something that looks like a science project,” he said.

The Promise Of Connection

“Hope” is a word you hear a lot when you talk to connected car experts. And there is a lot to be hopeful for.

When cars talk to other cars they can help drivers and safety systems work together to prevent crashes. A distracted human or front-facing collision sensor at the helm of a 20,000 pound eighteen wheeler barreling down a county road might not notice a black two door backing out of a driveway. But if the truck and the coupe talk to each other they could detirmine on their own that they’re on a collision course. Alarms could sound in the cockpit of the tractor trailer, alerting the driver to the danger. If the coupe came with braking assistance it could freeze in its tracks and stay out of the way.

In places where connected infrastructure is in place, a whole host of new possibilities emerge. Imagine getting on the road and becoming an anonymous data point in real-time traffic management. Together with thousands of other drivers making their way to work downtown that morning, your position and speed would inform real time changes in speed limits, lane use and intersections. The city could share information with GPS systems like Google’s and Garmin’s to help direct drivers along paths of least resistance and manage loads. If someone has a stroke and needs to be carried against traffic during rush hour, V2I systems in the ambulance could alert the traffic lights to clear paths of green along its route to the hospital.

The problem with all that hoping is that right now, none of the players have any clear long term plan to make it happen. Getting from hoping to doing will take action and leadership. GM is trying to provide.

GM’s impatience for a connected future may have as much to do with the technological potential as it does a desire to cut ties with the past.

The company’s lunge to front of the pack on V2V/V2I follows a painful period in the 106-year history of the once-indomitable automaker. In the first part of 2014, an ugly scandal cost GM what little positive press it had recouped after a $51 billion bailout in 2009. A defect in GM vehicles had been killing drivers for years, and the company had known about the problem as long ago as 2001. The reevaluations prompted congressional hearings (and a comparison between the automaker and cannibal serial killer Jeffry Dahmer on The Daily Show.) The ongoing recall is the largest in history.

“At GM, we have a renewed passion, the financial resources, the technology, and the talent to think big, to step up our investments, and to take calculated risks,” Barra said.

GM is taking a risk in publicly staking much of its professional reputation on networked roadways. Like cell phones and internet-connected computers, the value of the technology depends on achieving a critical mass of connected vehicles and infrastructure. If Barra’s company starts putting V2V/V2I in more of their production models but other manufacturers and the government do not get on board — or do so a decade or so later than expected, the tech would be a waste of money and investor faith. With the latest recall costing more than a billion in profits, its unclear how many more failures GM can afford to add to its pile. Barra would not be the visionary who led GM out of crisis into a renewed leadership role. Instead she’d join the list of oddball utopians who predicted transportation futures that never came to pass.

In A Perfect World

Cain believes that risk will pay off. “We’re hopeful that our announcement will encourage other automakers to follow suit,” he says. “Someone had to go first. We’re happy to do it.”

Certain state and federal agencies seem to be cautiously signaling that GM is headed in the right direction.

The National Highway Traffic Safety Administration, which oversees roadways for the federal government, issued something called an Advance Notice of Proposed Rulemaking on V2V technology in August. That means that given time (experts say at least a few years) NHTSA could begin instructing automakers to include V2V technology in all production cars at some point in the near future as a matter of public safety. They could even go as far as mandating retrofits of old cars with the tech, according to John Maddox, who helps lead an extensive testbed for intelligent vehicles at the University of Michigan.

At the same time, he cautions against too much optimism. A V2V mandate would put America ahead of the rest of the world on car-to-car communication, but infrastructure takes governmental resources and action of a kind that’s hard to imagine being implemented from the top down.

“We won’t see a national big bang of the kind we did last time with the federal interstate highways program under Eisenhower,” he said. “We won’t see that again given that we can’t even seem to finance the current system.”

Beyond resources and politics, institutional issues preclude a nationwide infrastructure upgrade: The federal government does not oversee the majority of the nation’s roads. That’s left to state and local governments to handle, and different states have different priorities. While departments of transportation in Michigan, California and Texas invest millions in preparing for a connected era in driving, other agencies have taken baby steps or none at all. The exact costs are hard to predict, even though studies by the NHTSA indicate places that adopt the technology will see returns from increased efficiency and safety, and even lower pollution as cars move in better tune with the roadways. (Something similar happened with the advent of automated tollbooths, which result in less idling time for drivers.)

Paul Lewis, an analyst with the nonpartisan Eno Center for Transportation, says that for connected vehicles to make an impact, the government has to match the energy of the private sector, and clarify issues such as liability for crashes connected to faults in the system.

Maddox says clearing all the roadblocks will be a matter of gathering momentum.

Like cellular phones a few decades ago, he says, “There will be hot spots and there will be dead spots. It will be critical that in those initial hot spots drivers see value from day one.”

He notes that GM’s focus, V2V, will have more trouble attaining a useful critical mass than V2I because it relies on other cars rather than infrastructure that may be concentrated along highly-trafficked routes.

For the most part policymakers, experts and GM reps share the same view: if V2V/V2I gets off the ground it will be as large a revolution in driving as any that has occurred in the century-plus history of the automobile. We have the tools to do it now. The next step is a matter of will.