See what happens when a 1927 Model T and a 1986 Mustang come together in an unholy (but fast!) union 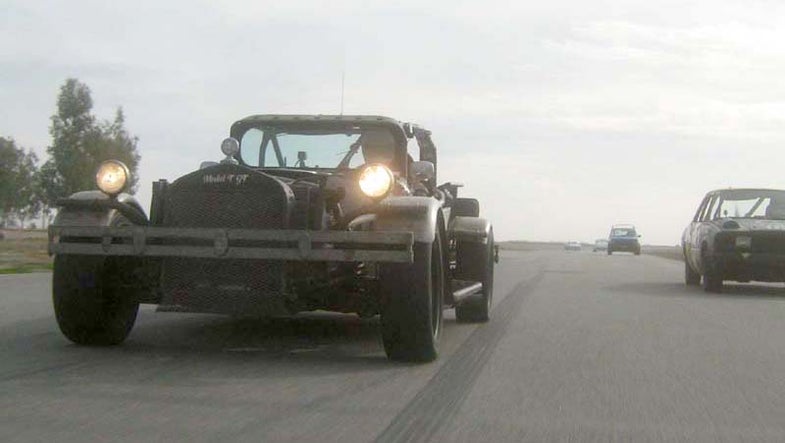 After four years, the 24 Hours of LeMons—endurance racing for $500 cars—has become one of the most competitive forms of motorsport on the planet. Most of the time, a team gunning for the bragging rights that come with a LeMons win will follow a standard formula: put a bunch of top drivers in a 20-year-old German or Japanese sports car. Not so with the Beverly Hellbillies; they’ve got the top drivers, all right, but their car is a 1927 Model T Ford pickup built by a crew of old-time hot rodders.

And it finished an incredible 9th out of 173 entries in a recent race.

Inside the cockpit. Shot by Dean Thomas

It’s difficult to describe the punishment this form of racing inflicts on vehicles; after a full weekend of full-throttle thrashing on a twisty road course, perhaps a third of the cars will be completely kaput (nuked engines, busted suspensions, and cooked brakes are the most common culprits) and another third will have spent all but a few hours with their crews crawling over them in a repair frenzy. Most wannabe-contender teams tend to choose from one of a handful of vehicles as the starting point for their LeMons race cars—the BMW E30, the fourth- and fifth-generation Honda Civic, Mazda RX-7, Mazda Miata, and Chrysler Neon are very popular—and rely on the engineering brains of the automobile manufacturers to keep their steeds going around the track.