An HVAC system powered by an 18-wheeler’s exhaust. 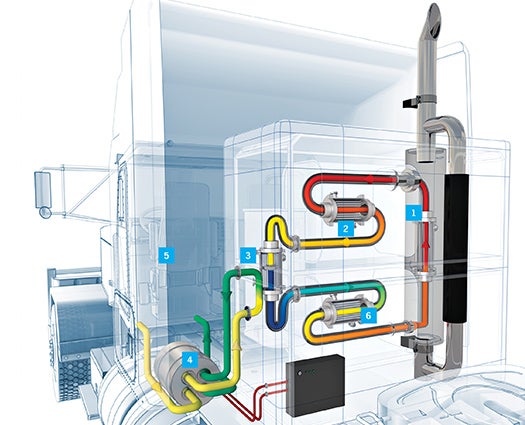 Semitruck drivers idle their engines to heat or cool their vehicles’ cabs—a practice that burns a billion gallons of fuel each year. Small engines on the back of a cab, called auxiliary power units (APUs), get the job done with less fuel, but they’re loud and smelly. A team of five Ontario-based engineers and mechanics has devised what may be a better solution: an APU called HYPER that runs on waste heat.

The group originally formed to build a 100mpg car for the 2008 X Prize competition. During one brainstorming session, someone wondered aloud: Why not use energy from a vehicle’s exhaust to run an HVAC system? “We did a lot of modeling and realized that the energy numbers made sense,” says team member Jack MacDonnell. He and two others decided to work full-time to develop a new kind of APU.

Like a household refrigerator yet a third the size, HYPER chills air by depressurizing a liquid refrigerant under high pressure into a gas—a process that absorbs energy. The gas then condenses to start the cycle anew. But instead of using electricity to drive the process, HYPER does it with a semitruck’s 660°F exhaust heat. MacDonnell says the APU stores between six and 10 hours of heating or cooling capacity after an hour of driving. Based on early tests, he thinks the device could cut a trucker’s yearly fuel consumption by 9 percent and carbon emissions by about 20 tons.

The team is testing HYPER on a retrofitted semi in hopes of selling road-ready devices in 2014. With 2.5 million trucks on U.S. roads, HYPER could make a significant impact—but the team also hopes to retrofit buses, RVs, passenger vehicles, and more. “We would drastically cut emissions, fuel consumption, and be less dependent on foreign oil,” MacDonnell says. 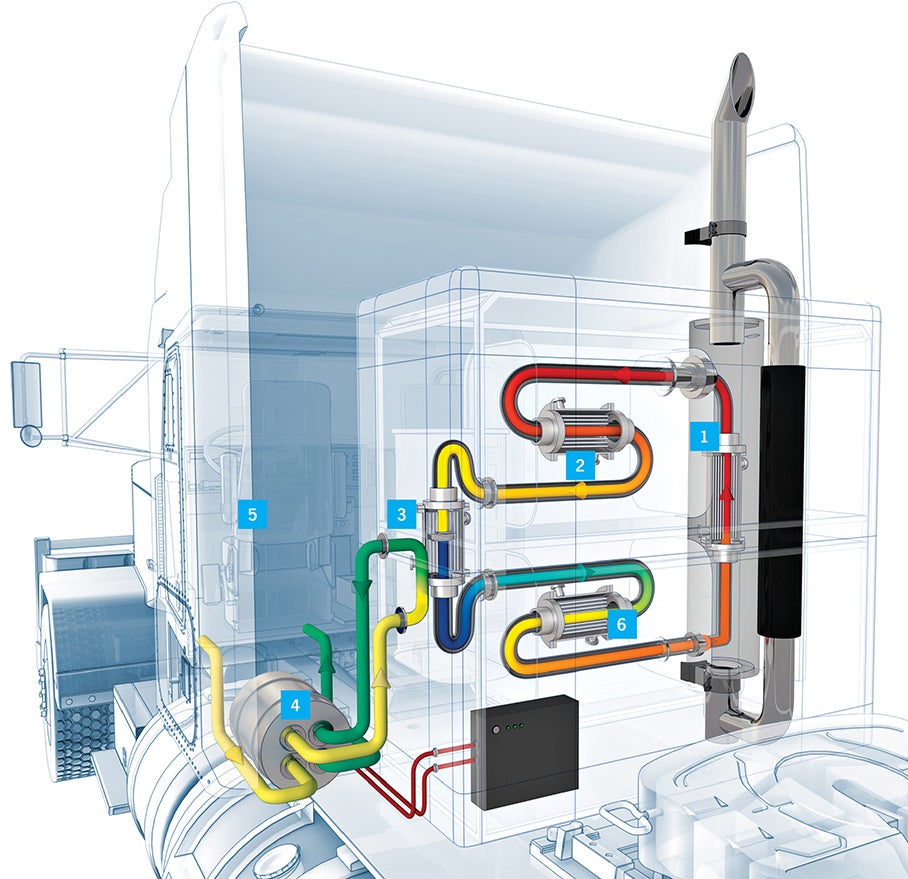 1) 660°F semitruck exhaust heats a refrigerant mixture [red] flowing through an exchanger. The refrigerant’s solvent boils from its solute, pressurizing the HYPER system.
2) A second exchanger uses a fan to help cool and condense the refrigerant into a high-pressure liquid.
3) The refrigerant [yellow] passes through a nozzle, flashing it into a gas [blue]. This draws heat from an adjacent fluid loop, cooling it to about 23°F [green].
4) A reservoir stores the chilled fluid.
5) Air blown across an evaporator (fed by chilled reservoir fluid) cools the truck cab.
6) A final exchanger condenses the refrigerant into a liquid to restart the cycle.

Update, April 19, 2013: The article’s illustration was clarified to show more detail about how the HYPER APU system works. An error in caption 2) was also corrected.