How It Works: Airport Fire Truck 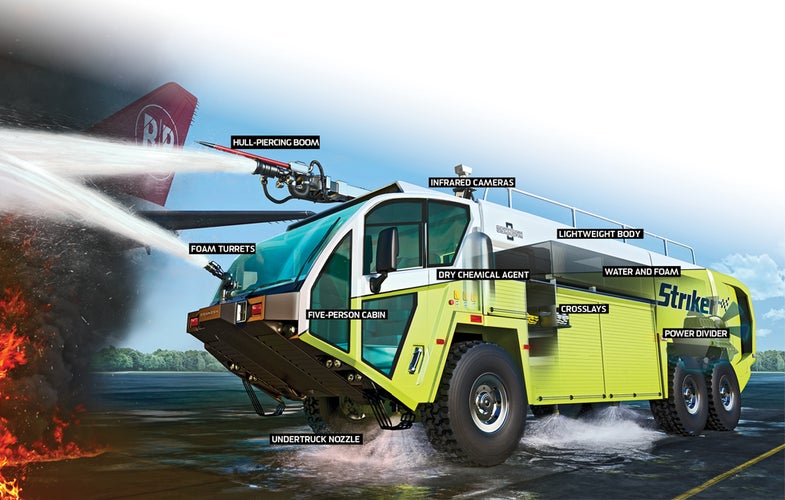 Aircraft fires pose unusual challenges for first responders. Extinguishing jet fuel requires thousands of gallons of flame-smothering foam, and the fuel burns so hot (up to 2,500°F) that firefighters typically have only three minutes to respond before passengers would be overcome by heat and smoke inhalation. Aircraft Rescue and Firefighting (ARFF) vehicles, then, must balance a heavy payload with quick acceleration. Since its release in 2001, the Oshkosh Striker has become the industry-leading ARFF; today it’s used at the White House, nearly every Air Force base, and more than 200 U.S. airports. In 2010, Oshkosh revamped the $600,000-to-$800,000 vehicle for the first time, streamlining the design and refining the controls.

National Fire Protection Association rules require this 44-ton six-wheeler to be able to accelerate from 0 to 50 mph in less than 35 seconds. (To put that in context, it takes a 40-ton semi trailer longer than a minute to reach 50 mph.) To compensate for the Striker’s heavy load of firefighting gear, engineers shaved 2,000 pounds from the truck’s weight by eliminating parts and switching to lighter materials throughout the vehicle.

If fire erupts inside the hull and responders can’t enter on foot, the Striker’s operator can use the “Snozzle” to puncture the aircraft’s skin, and then spray foam or dry chemical agents into the cabin. The 56-inch piercing nozzle is mounted at the end of a retractable 65-foot roof-mounted boom. The Snozzle can also provide cover to escaping passengers by raining a protective “water umbrella” over the plane’s emergency slides at 250 gallons per minute.

The cabin can hold a crew of five responders, who learn to fight aircraft fires in FAA-certified training courses. For small airports without a large staff, Oshkosh designed the Striker so that one person can operate the entire vehicle. Responders aim the bumper- and roof-mounted turrets using joysticks, select firefighting agents with switches, and spray them as far as 300 feet at up to 2,650 gallons a minute.

The Striker carries a 30,000-pound load of firefighting materials—420 gallons of foaming agent (consisting of stabilizers, solvents and other chemicals) and 3,000 gallons of water. Once the operator selects a foam concentration, an electronic flow meter allows the correct amount of foaming agent to mix into the water. The foam creates a film that smothers the jet fuel.

To make it easier for responders to fight fires on foot, the Striker features two crosslays—trays that store preconnected hand-line hoses so that responders can quickly pull them from storage and carry them toward the fire. The hoses automatically turn on once all 300 feet have been deployed.

Thermal-imaging cameras mounted on the roof send a live feed to a flat-panel display in the cabin. Responders use the screen to identify hot spots hidden from view, to focus their efforts on the hottest parts of a fire, and to navigate in bad weather (for example, in dense fog).

If flaming fuel spills onto the runway, ARFF responders might find themselves driving through a pool of fire. If that happens, operators can activate the Striker’s six undercarriage nozzles, which spray foam in 360 degrees beneath the truck.

The Striker’s single 700-horsepower V8 engine both propels the vehicle and powers the pump that generates pressure for the turrets. A computerized “divider” allocates power between the axles and the pumps, making it possible to drive the truck and spray the turrets at the same time. 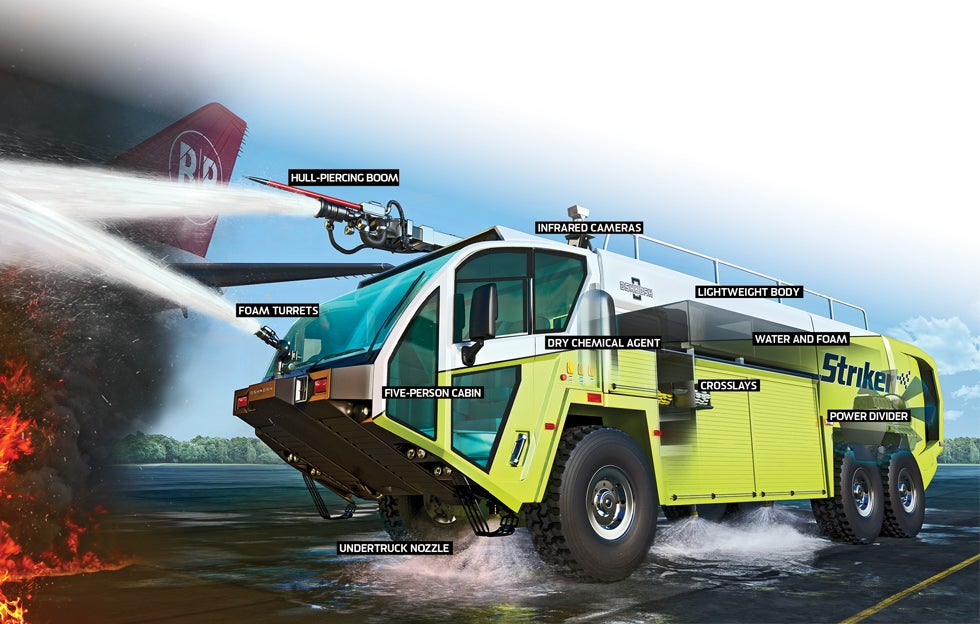