The Mechanism Of Microbial Memory

Bacteria can learn how to survive in an environment 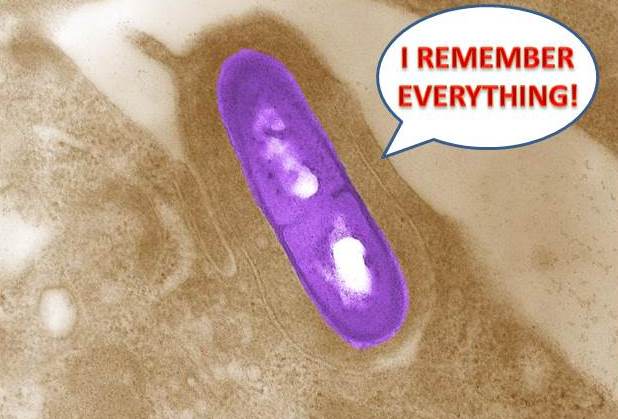 One of the most fascinating traits of biology is the ability to remember. Memory helps us to use language, orient ourselves geographically and perform various tasks. This characteristic is not only limited to humans; animals also have this ability as demonstrated in the use of sign language by primates and the ability of long lost pets to somehow find their way home.

Memory also happens in the microbial world. For over 40 years researchers have investigated the process of how bacteria apparently gain knowledge of an environment and somehow act in a certain way. The earliest observations were based on gradients of chemicals. Depending on the concentration available, a certain number of functions were automatically initiated. This eventually led to the discovery of more complex mechanisms in which bacteria changed their genetic code in response to a known environmental stimulus.

For pathogens, memory can help to increase the efficacy of infection and even shorten the length of time needed to establish a hold on the host. One of the most useful is the adaptation towards antimicrobial resistance. After figuring out a means to halt the attack of antibiotics, the bacterium maintains the genes necessary for future use. This form of recall has significant impact on public health as it is a major contributor to the oncoming post-antibiotic era.

But one of the more interesting functions of microbial memory in pathogens may be the recognition of a particular host type. Although pathogens may appear to cause disease universally, researchers have learned some microbes infect certain subsets of a susceptible population differently. This specificity has been linked to the genetic makeup of the individual being infected, also known as the genotype.

For researchers, particularly those interested in understanding infectious disease, this form of remembrance poses some potential problems in analyzing the effects of a pathogen. If the genotype is not favored, a less than optimal amount of virulence will occur. This could impact not only observations of the infection itself but also on the benefit of treatments and therapies as they could miss out on more egregious infection mechanisms.

While the concept of host-specificity has been understood, how to determine the most favorable host for a particular bacterium has been a challenge. But recently, a team of Austrian researchers revealed a possible method for the detection of pathogen preference and also how to potentially remove it altogether.

The technique is known as Fourier Transform Infrared (FTIR) spectroscopy and involves the identification of vibrations at the molecular level. When a biological sample is analyzed, a unique fingerprint of the various sugars, proteins, genetic material and even fats can be established. It is an excellent means to identify individual microbial species but it can also be used to look at metabolism. For the researchers, this was the perfect tool to better understand microbial memory.

The team used Listeria monocytogenes, in their experiments. This bacterial pathogen has the ability to infect a wide range of species, including humans and mice; they chose the latter for the host. Using three different genotypes of mice, the metabolic action of the bacteria was analyzed and then compared. Not surprisingly, each different type of mouse led to a different metabolic response from the bacteria.

But the real value of the experiment came with continued passaging of the pathogen in the same genotype. With each generation, the bacterium became more adapted to the specific nature of the host. The authors believed this may have been due to the various forms of communication between the mouse and microbe but none were specifically identified.

The last test involved determining whether memory was ingrained or could be lost. Much like our ability to remember a language or geographical location, if we are not continually familiarized with the stimulus, we may lose our ability to quickly recall and act. The group accomplished this by taking the bacteria from the mice, and placing them in petri plates instead. Sure enough, without the mouse environment, the metabolic signatures disappeared; memory was not permanent. In the context of disease, this meant absence from a host could effectively prevent a bad infection.

The overall conclusions of the study focused on the ability to identify specific metabolic memory and also host susceptibility using FTIR. Yet, the results also provided insight into how pathogens like L. monocytogenes can adapt such that they can become introduced to a host and eventually learn how to cause the greatest level of infection. From a public health perspective, this may provide a glimpse into how we may be able to combat infections in the future through a better understanding of the microbial fingerprint. It may also help to determine the best routes for treatment and therapies by focusing on blanking out the memory such that the bacterium simply cannot remember what to do.