Women are less likely to receive CPR—but why? 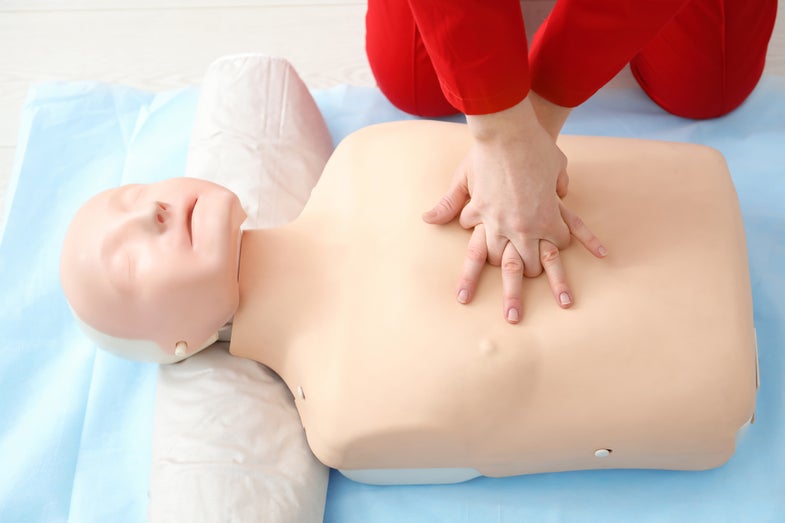 Picture it: you’re in the street and the person standing beside you collapses. What do you do? If you step in, you’re more likely to end up performing CPR on a man than a woman with the same symptoms. The result: men are more likely to receive CPR from bystanders, and thus more likely to survive a sudden cardiac arrest. This finding, published last year, garnered a lot of media attention at the time, but remains poorly understood. Two studies presented this week at the American Heart Association’s annual conference examine the problem and possible ways to address that disparity in care.

“Women have a lower rate of bystander CPR,” says Sarah Perman of the University of Colorado School of Medicine. But nobody really knows why this is so—although possible reasons are easy to guess. Perman and her coauthors turned to Amazon’s crowdsourcing service, Mechanical Turk, for answers. They offered participants $1 to answer the open-ended question, “Do you have any ideas on why women may be less likely to receive CPR than men when they collapse in public?”

The 54 responses they got helped shed some light on public perceptions of why this might be happening—though Perman notes these are just initial results from a small (albeit national) survey. Another more comprehensive survey is currently undergoing peer review, she says. Its results broadly track with what was seen in the preliminary survey, and it was also conducted using Amazon’s Mechanical Turk.

As a clinician, she says, she wasn’t surprised to see responses citing concerns about accidentally hurting women and an inability to understand exactly how bad a woman’s symptoms are. These are both known issues that affect care.

However, “I was surprised at the large proportion of people who responded about unwanted touching,” she says. Respondents expressed concern that touching a woman’s chest could be construed as assault or unwanted sexual touching.

“Men don’t want to appear grabby or awkward placing their hands on a woman’s breast they don’t know,” one response read. Another said, “men are likely afraid of getting accused of some kind of sexual molestation of some sort.”

Since false reports of sexual assault are not more common than false reports of other kinds of crime, this result might say more about public misperceptions than it does the actual concerns of a bystander. But that doesn’t mean it isn’t troubling. “This isn’t a scenario where a woman is in distress,” says Perman. “This is a scenario where a woman is on the ground with no pulse, potentially dead.” Given that scenario—one where a few broken ribs are a known consequence of CPR and not perceived as assault—she was surprised to see this fear on the list at all.

In a way, it’s not surprising that doctors and other researchers don’t really understand what’s going on when bystanders make choices about whether or not to administer CPR. “By definition, sudden cardiac arrest is sudden,” says Marion Leary of the University of Pennsylvania. “We don’t know when it’s going to happen, or where.” That means studying people’s responses in the field is pretty much impossible.

The PhD student and nurse researcher is the lead author of a paper examining a new method of addressing this methodological issue. She and her coauthors looked at response to someone having a cardiac emergency by using virtual reality. Seventy-five participants wore a VR headset and interacted with a CPR dummy in an virtual scenario. The dummy was presented in a randomized way, as either male or female and white or non-white.

Looking only at gender, their results showed that people (especially men) were more likely to perform CPR and use an automated external defibrillator on men. Like the first paper, however, a larger study is needed to fully understand the trend and figure out what (if any) parts of it are statistically significant and can be used to explain why women are less likely to receive CPR. Further study is also planned to figure out the ways that race figures in, Leary says.

“I like the use of virtual reality because we can manipulate different factors that we know are an issue,” says Leary. But the use of VR may be able to go beyond study and help make CPR training more inclusive—and thus, more effective. “Right now, it’s sort of a one-size fits-all training program,” Leary says. Because things like gender and race aren’t addressed in CPR training, and CPR programs use a standardized, male-presenting dummy, there’s room for anxiety about different kinds of bodies to creep in and prevent bystanders from taking prompt action.

“We want people to call 911, we want people to perform CPR, we want people to ask for and use a mobile AED,” she says. Figuring out barriers that keep them from taking these vital steps, and how to break them down—like potentially using a VR app to simulate different kinds of cardiac arrest sufferers in a CPR training class, something her team is exploring—is important. “Once you uncover these sorts of things, the worst thing you can do is not address it,” Perman says.

Correction: A previous version of this article mistakenly referred to Leary as a nurse practitioner. She is a nurse researcher.