Dispatches from the front lines in the battle against Ebola 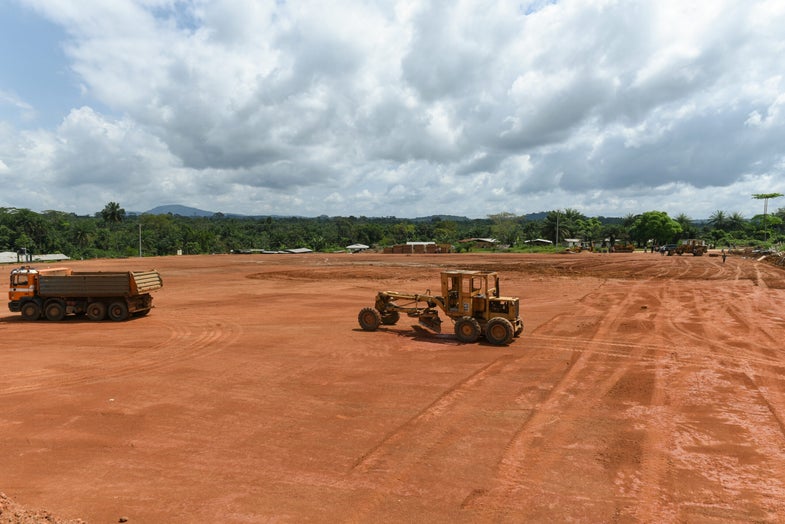 When I first stepped up to a Liberian Ebola treatment unit in early November, I had heard so much about them I felt like I knew what to expect. There would be endless hand-washing at every building entrance and lots of decontamination with chlorine solution. There would be people lumbering about in personal protective equipment (PPE) – the Tyvek-suited icons of this crisis – and also many people not in PPE. But even though I knew all that, it was only seconds before I realized I had much more to learn. At the entrance gate, where the hygiene monitor sprayed my boots’ soles with a 0.5% chlorine solution (sounds weak, I thought), I tried to express nonchalant surprise as pasty orange splotches blossomed on my black trousers wherever the chlorine hit.

“Don’t worry,” my colleague said. “We all have them.” I looked around and saw discolored pant legs everywhere, mostly faded jeans. Those looked cool, I thought, mine looked dumb.

That was back in November when I acted as Senior Program Manager for the non-governmental organization Heart To Heart International. I helped set up and manage their Ebola treatment unit (ETU) in Tappita in rural Liberia. Heart to Heart is a humanitarian organization based out of Kansas and they deliver urgent medical services and supplies to places like Haiti, the Philippines, and now, Liberia. Hence the name—from the heartland of America to the heart of complex emergencies around the world.

By midsummer, the humanitarian response had settled on the ETU as the frontline defense against the widening outbreak. The centers have successfully treated hundreds of Ebola patients and screened thousands more—helping contain the virus’s spread. But they’ve also been controversial, requiring millions of dollars to build and operate, and construction delays meant that when many ETUs opened, cases were already in decline. So they’re clearly not the only thing stemming the outbreak. To fully understand the ETU model, we have to start with how they were constructed.

Some ETUs were built by non-governmental organizations with their own schematics. Others were planned by the U.S. Department of Defense according to strict instructions. That is one of the quirks of most ETUs: because the crisis is so new, the designers didn’t have the experience with Ebola that the facility operators do. Take Heart to Heart’s site, for example. The Tappita ETU started as a lush green field dotted with banana trees. Then, engineers from the U.S. Army and construction contractors plowed through with bulldozers to lay a foundation. Over the next month, they raised up buildings and tents, (tried to) dig wells, installed water tanks and plumbing, and covered the ground with chunky gravel. They trucked in materials for carpentry and electrical wiring from the capital Monrovia, a 11–12 hour journey over spine-jarring dirt roads. When those roads turned to sludge during rainy season, Chinook helicopters flew in the materials.

Before the ETU was even completed, however, there were changes that the doctors and nurses needed that were not in the original plans. There were entryways that needed to be cut out of solid walls, partitions that needed to be squeezed between patient beds, bright orange ski barriers that needed to be moved around to safely separate out contaminated areas. With those changes, a cluster of tents and shelters eventually became a functional and safe space that can both treat confirmed Ebola cases and reduce the risk of further infection.

Setting up an ETU is, in truth, a process without end. For instance, the wells kept collapsing because of Liberia’s dry red earth. In a future post, I will round up some key questions about this approach and point out why they have caused so much tension. My ultimate goal is to invite Popular Science readers’ input on some of these puzzles that turn up every day. You might not think it, but every little detail counts with public health issues, and I think everyone can contribute something to ending this Ebola crisis, even from afar.

And hopefully, the more I learn, the fewer clothes I will ruin. 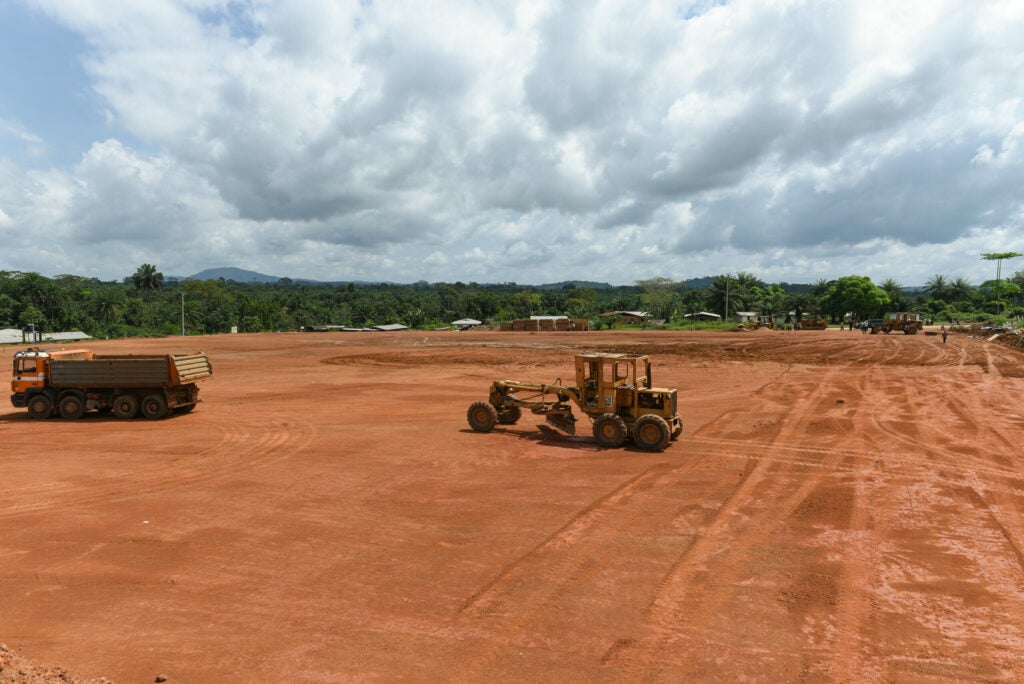 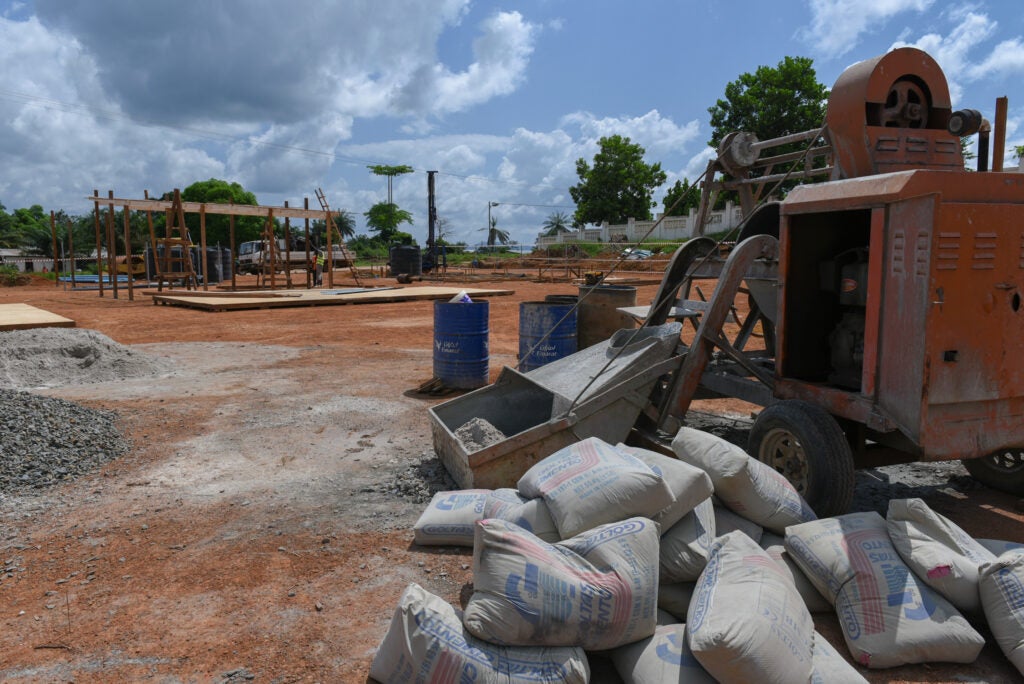 Construction materials, such as plywood boards for flooring and bags of cement for building foundations, cover the new ETU site. 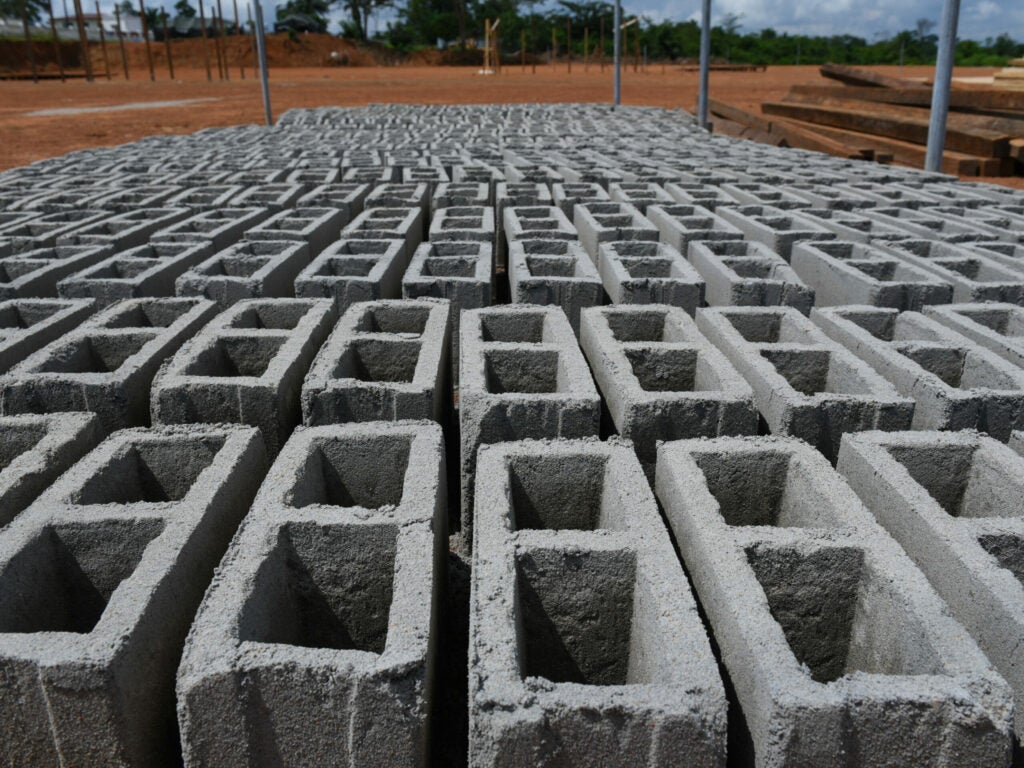 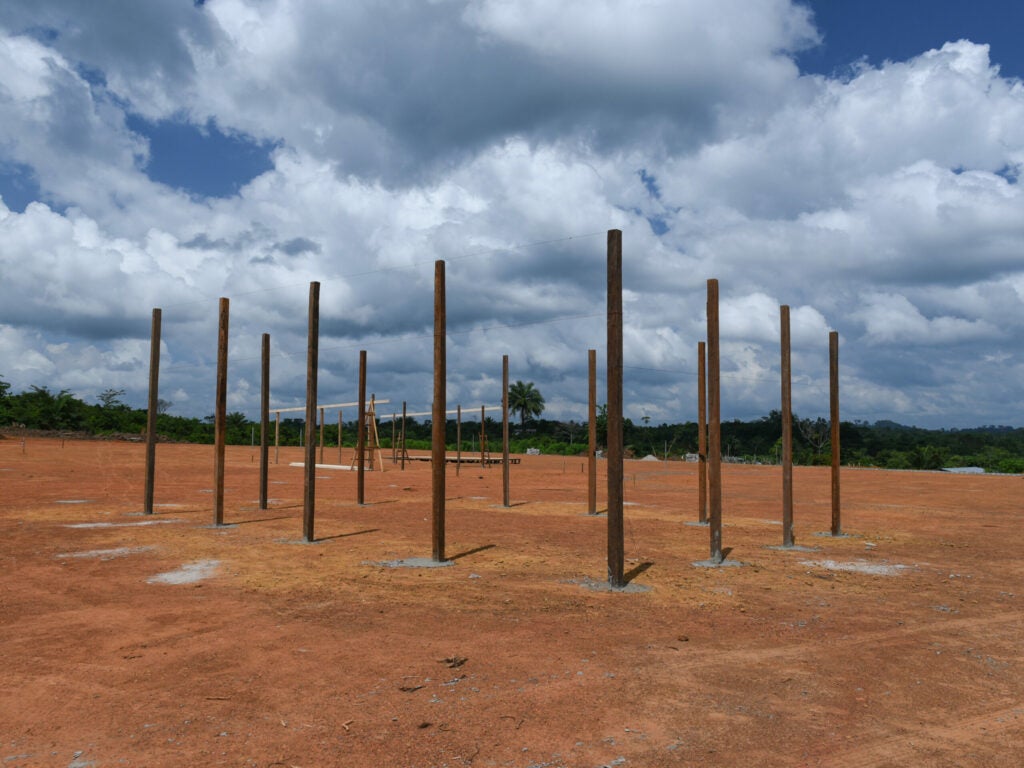 Most structures at an Ebola treatment unit are wooden frames with vinyl tarps as walls. Here one of the first frames goes up at the Tappita ETU. 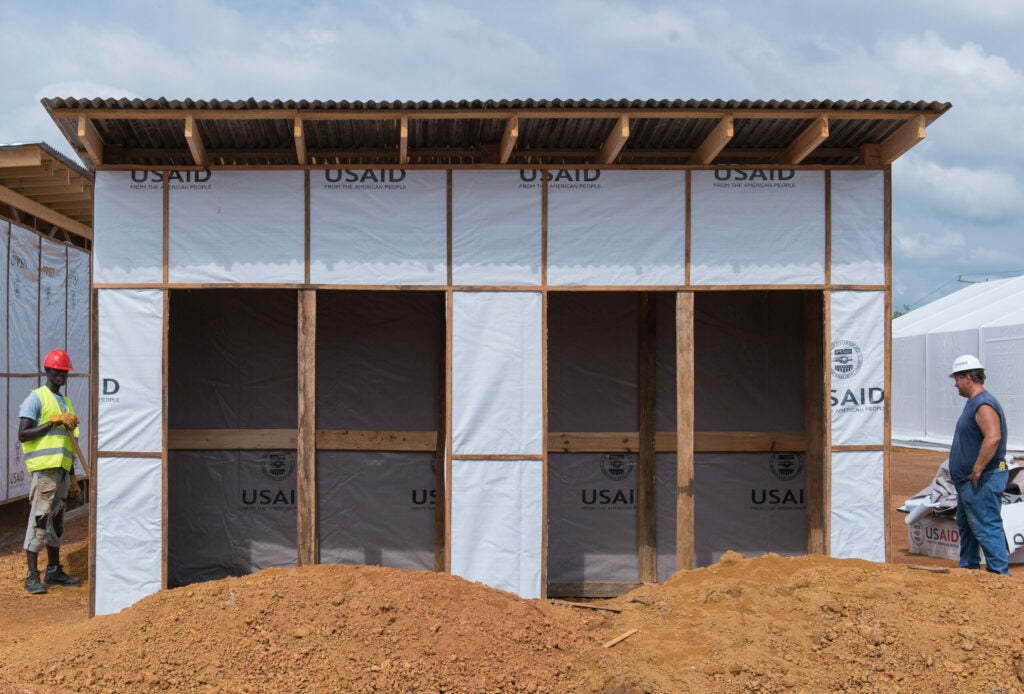 Two construction workers stand on opposite sides of a nearly complete latrine at the Tappita ETU. 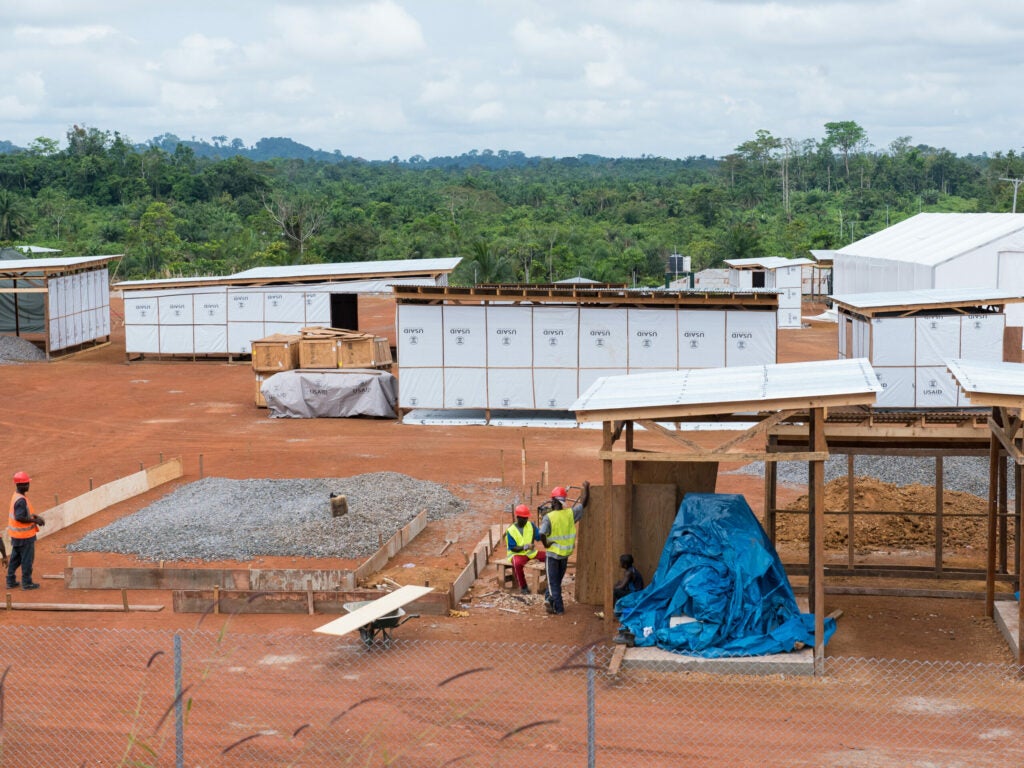 The Ebola treatment unit in Liberia nears completion after two months of construction. 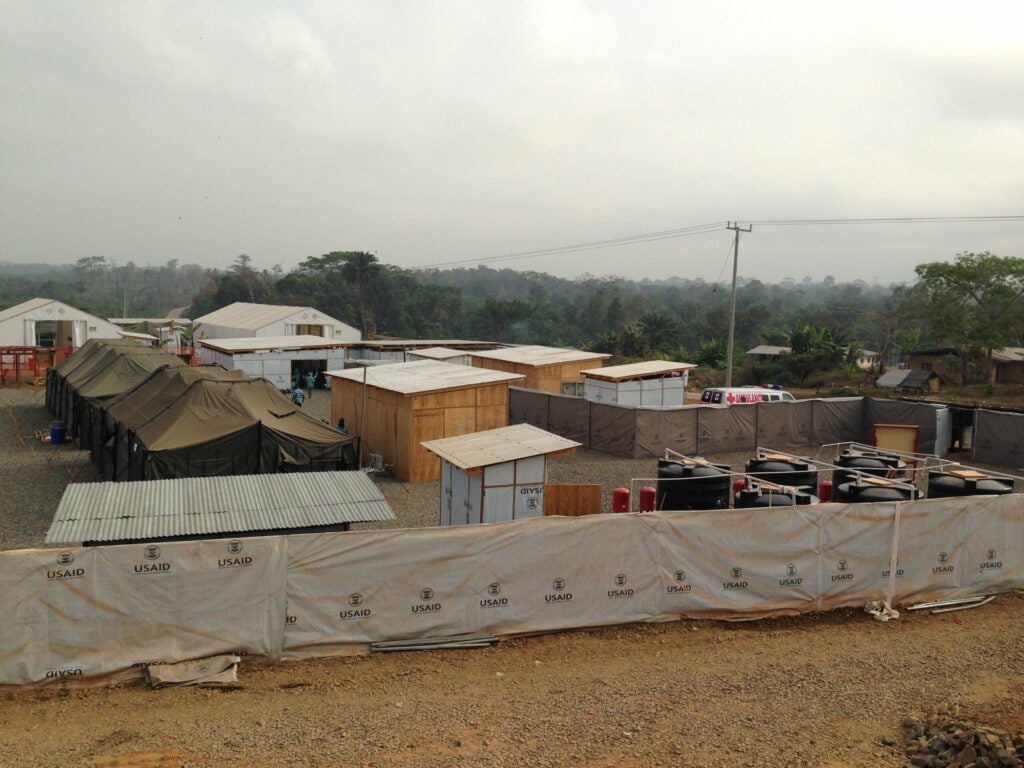