Alligator Antimicrobials May Help Us In A Post-Antibiotic Era 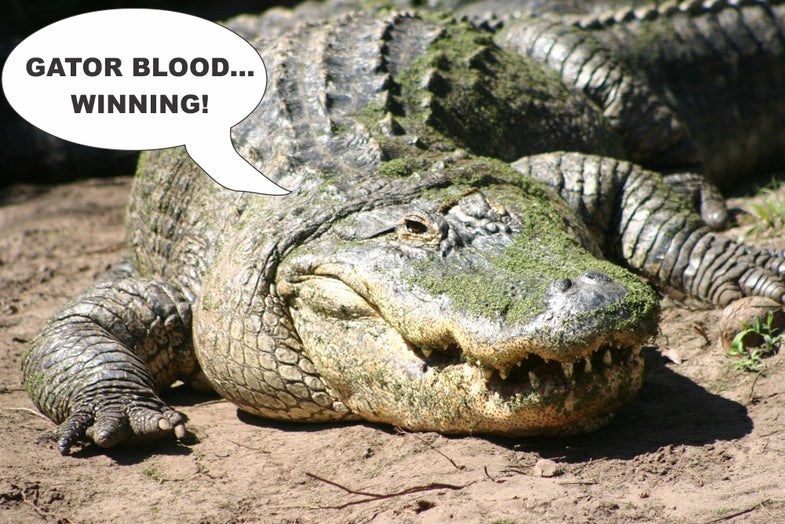 Among all the animals captivating our collective attention, one of the most prevalent has been the alligator. Historical records reveal these ancient creatures have caused fascination and fear since the 16th Century. More recently, alligators have been the topic of a number of television programs, movies, and even musical compositions. While our social fancy for these creatures has a long standing history that shows no signs of waning, for public health officials, the adoration is just beginning.

Back in the 1990s, the alarm was sounded regarding the collapse of antibiotic use due to resistance. Though the end was still decades away, the mere thought of losing the ability to use these weapons for health defense sent a chill throughout the entire scientific community.

As part of the response, a number of researchers began the hunt for novel antimicrobial candidates in the environment. From soil to water to fish to bird to animals, any potential source was worth investigating. One of the most promising sources was reptiles. Over the years, a handful of options were discovered from the skin of frogs, the venom of snakes, and even turtle eggs. Most of them took the form of antimicrobial peptides. These short chains of amino acids were found to have similar effects as antibiotics with little to no issues regarding resistance.

When it came to alligators and their taxonomical cousins, the crocodiles, there was more than just hope, there was belief. First, researchers began to explore the blood of these creatures if only to find evidence of antimicrobial action. The journey was well worth the effort as the serum was found to inhibit the growth of the bacterium Escherichia coli in lab tests. At the time, however, the tests revealed the activity may have been due to the immune system and not due to any specific antimicrobial molecules.

The results did not stop the hunt and the persistence held out as over the coming years, a number of antimicrobial peptides were found particularly in two species, the Siamese crocodile as well as the American alligator. Over a dozen possibilities were catalogued as a result of years of experimentation.

Yet this was presumed to be only the beginning. Considering these animals lived in environments where pathogens were not only present, but prevalent, there had to be more. Last week, an American team of researchers verified the belief by finding several new cationic antimicrobial peptides in the American alligator’s blood; two of these may deserve further testing as candidates for human use.

The group used a novel technique called bioprospecting particle-assisted proteomics. The process was rather simplistic in concept as it utilized the electrostatic forces of amino acids to harvest potential candidates. Hydrogel microparticles with a negative charge were introduced into plasma and allowed to incubate. Over time, positively-charged molecules migrated into the gel and became captured. After the particles were removed, peptides were eluted from the matrix and then analyzed using mass spectroscopy. Sequences were then identified and the most promising candidates were synthesized for antimicrobial testing.

The procedure was a complete success as 568 peptides were isolated from alligator plasma. From these, 45 were believed to be antimicrobial in nature. The team chose eight from the bunch for synthesizing in the hopes at least one would demonstrate activity against the pathogens Bacillus cereus, E. coli, Pseudomonas aeruginosa and Staphylococcus aureus. In the end, five showed some killing potential although only two had significant activity. One was effective against P. aeruginosa as well as B. cereus. The other targeted S. aureus.

Upon further analysis of the peptides themselves, the team realized they were not separate entities contained within the alligator plasma. Instead, they were pieces of much larger proteins, such as apolipoprotein C1 and alpha-1-antiproteinase. How they went from being part of a larger complex to these smaller, more effective molecules was unknown.

The results of this study, while moderately successful, have a greater importance in terms of the bioprospecting method. In the hunt for novel antimicrobial candidates to replace our waning stock of useful antibiotics, we have to accept there is a race against time. Even if one of the two successful peptides was deemed worthy enough to continue through the development pipeline, several years would pass before the candidate would even see clinical applications.

The technique of bioprospecting is rapid and can improve the screening stage for these molecules. Also, due to its rather straightforward protocol, almost any animal sample may be tested. This portends for the future a quicker turnaround for researchers – perhaps at less cost – and may facilitate an increase in the number of candidates undergoing testing for medical applications. Although there are no guarantees, this paper may help to suggest looking forward we may have more reason to hope than fear.