Amazon’s Gur Kimchi On The Future Of Delivery Drones

The engineer behind Prime Air says delivery drones are just a few years away. Here's how they'll work. 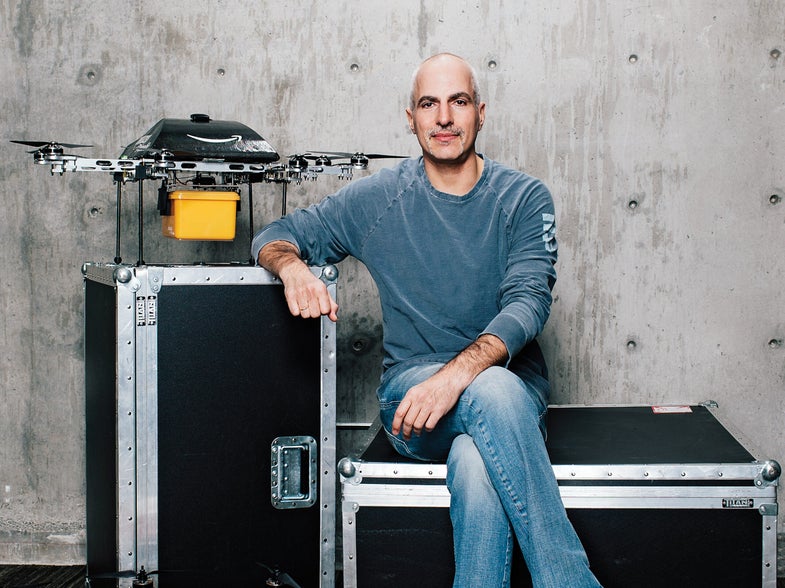 In December 2013, Amazon CEO Jeff Bezos surprised viewers and announced on 60 Minutes that his company is working on drone delivery. It seemed like a PR stunt, but since then, Amazon has run test flights, lobbied the Federal Aviation Administration, and listed drone engineer jobs. Few are closer to the project and better positioned to talk about its future than Gur Kimchi, vice president of Amazon Prime Air.

Popular Science: Where did the idea of drone delivery come from?

Gur Kimchi: I’ve been passionate about aviation all my life. So, something like drone delivery was never far from my mind. Amazon has been working on it for years, and in 2013, when we decided the technology was mature, we went public with it. We think it’s going to change the game.

PS: How much are the drones able to carry?

GK: We’re designing for the small UAV category. Our drone—plus everything connected to it—weighs less than 55 pounds. Each one can carry up to five pounds, and that represents as much as 80 or 90 percent of all items we sell.

PS: Where and when will we see the first drone deliveries?

GK: We will start making deliveries where we have infrastructure, such as fulfillment centers, and regulatory support. In terms of when—look, this is not that far. The future is sort of here. Drones are already being used for tasks such as crop monitoring and bridge inspection. We won’t see broad adoption overnight, but we will get there, and we’ll get there safely in the next few years.

PS: What will it be like to receive a drone delivery?

GK: I have three kids, and once when my wife was on a business trip one of the little ones woke up in the middle of the night screaming for a pacifier, which I couldn’t find. I had a moment of panic. Do I wake up the other kids, load everyone into the car, and drive to a 24-hour pharmacy—if I can even find one? I got lucky and found the pacifier. But the better solution was for the pacifier to come to me. I imagine myself pulling out my phone, pushing a button, and 30 minutes later the pacifier shows up. It’s not about people not wanting to make an effort; it’s about people focusing on what’s important to them at that moment and having infrastructure to support that.

PS: When you talk to people about Prime Air, what’s the usual reaction?

GK: In the beginning, people thought this was just science fiction. But in the last year, with the dialogue around it, it became a lot more mainstream. Even still people ask, “Wow, are you really doing this?” And I say, “Yes, this is my day job.” You get into this disbelief and excitement cycle.

PS: What would you say to people who aren’t excited, but worried?

GK: Well, people were distrusting of cars when they were first introduced; they didn’t want cars to go faster than horses. But I think the other part of it is that for Amazon, safety is a main objective. I would reassure people that we won’t release anything until we know this is a safe system.

PS: What are some of the technological barriers that you’re wrestling with?

GK: One challenge we’re working on is called “sense and avoid.” The capability allows vehicles to operate safely and autonomously. There’s an analogy that a member of my team, Amir Navot, came up with: We want drones to be more like horses and less like cars. If you’re sitting in a car and driving toward a wall, the car will hit the wall. If you are on a horse and you ride toward the wall, it will stop on its own. We want to make drones independently safe, like the horse.

PS: How do you see the future of deliveries?

GK: Think of mobile phones—they teleport the Internet to us. We used to have to go to a desktop, sit down, and log on to access the Internet. Now, it comes to us, wherever we are. We’re aiming to do the same for physical goods. Prime Air is trying to get as close as possible to real teleportation—without breaking the laws of physics.

—Edited and condensed by Lindsey Kratochwill

This article was originally published in the March 2015 issue of Popular Science, under the title “Gur Kimchi Wants To Deliver Your Goods In Less Than 30 Minutes.”