GPS is really good at finding where people are, typically with a margin of error of just a few meters. That’s fine if you’re using GPS for driving directions, but if you’re, say, a drone operator, you might want to navigate the sky more precisely, as a few feet can mean the difference between flying between buildings and crashing into them. Created by Swift Navigation, the Piksi (pronounced “pixie”) GPS receiver could give unmanned aerial vehicles a GPS signal accurate to an inch. The project has already received nearly six times its initial funding goal on Kickstarter.

Fergus Noble and Colin Beighley, the guys behind Swift Navigation, have experience in drones, specifically with work on wind turbines attached to flying kites. Knowing the precise location of a kite as it flies in circles is important, because the kite will fly autonomously for months and needs to self-correct back to a designated course in case anything sends it off-track. Knowing precisely where it is within inches is much better than being off by several feet. This was an especially acute need with some small prototypes flying in circles not much bigger than regular GPS margin of error.

Unfortunately, the available technology to track such kites is super expensive. For example, the trade publication GPS World names the Sokkia GRX2 as a low-cost possibility, and it costs $14,500. That might be low cost for the Pentagon or Exxon Mobil, but for most everyone else it’s a little pricey. Faced with that, Noble and Beighley set out to create their own version. 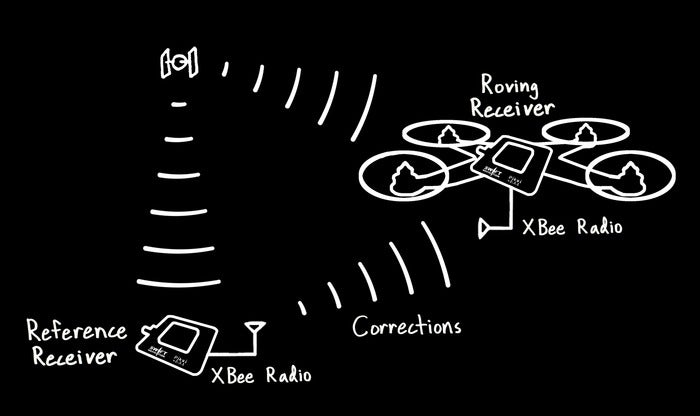 Diagram of the Piksi RTK System

So the TIE fighter attacks the helicarrier with WiFi? “One Piksi on the ground as a reference receiver, sending ranging corrections to a Piksi onboard a UAV.” Oh.

The Piksi is a Real-Time Kinematic (RTK) GPS receiver, best explained in reverse. The receiver part means it gets signals from satellites in Earth’s orbit. These satellites transmit a signal of their own location in orbit, with a time signature, down to Earth. A receiver uses the signals from four or more satellites to pinpoint a spot on Earth. Wherever the signals overlap on Earth, that’s where the receiver is, and this makes the GPS system. However, the size of the waves transmitting the signal mean that the spot of overlap is several feet.

RTK works from a disparity in the length of the code transmitted and the length of the wave carrying the signal. The signal itself travels in a wave, with the location information coded in segments 985 feet long. The waves making up that code are much smaller than the whole code, with each wave about 7.5 inches from peak to peak.

Piksi uses this information to create a more precise measurement. In communication with another RTK receiver for reference, the RTK GPS system, like one in use on a drone, compares the difference in number of wavelengths between the reference point and the system itself. Since the reference point is a known location, this cross-checking of wavelengths, combined with clever algorithms, lets the RTK receiver pin the location down to within inches.

To make this clever system available at just $900, the Piksi uses open-source software and a two-receiver check system. Cheaper, commercially available processors also help bring costs down. Noble also tells Popular Science that another reason for high competitor costs is simply “that the market can bear it.” With the billion-dollar budgets of oil companies and military clients, prices in the thousands of dollars are hardly notable.

For real-world applications, imagine a crop-dusting robot that flies low and precisely over every single row of corn, or a small drone that carries packages from rooftop to rooftop with the precision of a carrier pigeon.

Watch their pitch below: