How Will Drones Change Sports?

Popular Science sat down with drone company Arch Aerial to chat about how drones are changing the way some sports are filmed. 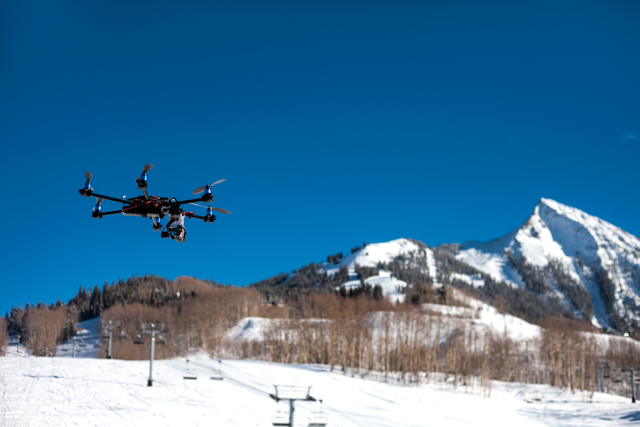 A couple years ago, Ryan Baker founded Arch Aerial, a Houston-based drone manufacturer. An archaeologist by training, Baker worked on shooting excavations for clients, and eventually moved into working on films. Then, universities and high schools came knocking; they wanted drones to film their athletics. Now, with drones recently shooting sports at the Sochi Olympics, the idea might be gaining some mainstream traction.

Baker gave a talk at South By Southwest about how drones are changing sports, and we caught up with him after to chat.

Popular Science: Can you start by telling me a little bit about how drones are already being used in sports photography?

Ryan Baker: It made the most sense and it was first adopted by extreme sports, because one, the general user in extreme sports, a lot of times they’re younger, and they’re trying to get shots of them skateboarding or skiing or snowboarding. That’s where it’s at now.

Drones being used at Sochi—that was huge, for our industry in general, because it put it in the public eye. It’s becoming a thing that’s adopted by mainstream sports.

RB: Football, initially people think wide game passes, that’s a possibility. But I think it’s more going to be used for practice film and promotional film for teams. Certainly you can get those long shots using those things, but I don’t know if they’ll actually implement that for liability reasons.

PS: You talked a little about having constraints on it due to battery power. You can only have 15 minutes for a shot?

RB: That’s really where the industry’s at right now—it’s about 15 minutes, depending on payload. Also it’s dependent on how high you’re looking to go. Climbing is very taxing on the battery. Laterally, at a lower altitude, you might get a little bit more time out of it.

PS: With that in mind, what are the advantages of using a drone instead of a traditional camera system?

“Drones are for users who don’t have a CableCam system, like a high school football team that wants to get CableCam-style views.”

RB: CableCams take a while to set up, they’re expensive. Helicopters are certainly expensive to rent. The ease of use in terms of setup, operating costs—it’s definitely the smarter choice. Obviously you don’t get an hour flight time, but I don’t know how many people are getting uncut 15-minute shots. It’s a lot of panning and that sort of thing.

PS: So this isn’t necessarily something that the NFL, which already has a used infrastructure, would use?

PS: So you make a kit, someone buys the kit and wants to use it. Who’s the pilot? Let’s say, in a high school or college game.

RB: We’re just now starting to get involved in high school football, in terms of the mainstream sports. If you’ve got someone in a university, I would think they’d pull somebody from a journalism department or an engineering department. That would be a smart move, if you have those resources internally. If you’re a small organization like a high school football team, then it would probably have to be a coach or a student manager. But having the person who’s had some training, or maybe has some background in RC helicopter flight, that’s just generally helpful.

PS: What’s training like? Most people are probably amateurs, even if you get them from a school. How long does it take before someone is comfortable doing it, and how do they know they’re comfortable flying it around a stadium?

RB: One of the things we suggest for our customers who are flying it in situations like that is to get a small, indoor microcopter—fly indoors, crash into your wall or your couch or whatever. In terms of training, the internet’s a great resource, but for our clients we also put out a flight portal on our website. On there is flight training and videos on how to change an arm if you snap an arm and that sort of thing. We’re trying to see them all the way through the process.

We also do training for companies like an architecture firm, or a high school football team or an archaeological excavation, where we’ll come out to them or they’ll come out to us and we’ll put them through a 12-hour training program.

PS: Let’s talk about the legal issues. This week, a judge ruled that the FAA doesn’t necessarily have jurisdiction over commercial use of drones. Are people that you’re going to and seeing about this concerned that they don’t know what the status of this will be in a year?

RB: I don’t know if they’re concerned they won’t be able to use it, I think they’re waiting to see how they can use it. The industry is booming. It’s gone from something very small to a noticeable component to the tech marketplace. It will certainly be addressed. People aren’t worried about if it will be used, but using it properly—and they want to see other companies and organizations using it before they do.

As the technology progress, it’ll be safer. Not that it isn’t safe already, but there’s a lot of room for operator error. The industry has to keep progressing, but it’ll add more clients and add more components to the safety aspect as time goes on. That decision, I’m sure everyone in the industry was happy about that, but it’ll have to be addressed. There’s no getting around that. And I’m all for some sort of training or certification. Nobody wants to see someone get hurt.

PS: Are there liability issues in sports? If you’re a manufacturer and you send it to someone and it goes into the crowd, do you need to get waivers? Something else?

RB: It’s sort of that gray area. It depends on who your lawyers are, and what your state’s legal situation is. That’s why I don’t think it’ll be adopted at NFL games—one because they already have mobile CableCams, two because nobody wants to be that organization. But I think there are other applications. It doesn’t have to be a high-crowd situation. There are certainly broadcast applications that are safe.

PS: That’s another question. Is this something where people will take it into the film room and say, “This is what we need to do better next time,” or is it more for broadcasting applications?

RB: I think it’s both. In the PAC 12 they’ve been using it, and there are major universities around the country that are starting to adopt it. For practice film, they might be using it for tracking shots, where they want to follow a player that you couldn’t get with a fixed position. Broadcasting is going to be huge, just because the shot you get with a CableCam will be much cheaper with one of these things, and you can take it to crazy places, where you’d be limited with a CableCam.

PS: How far do you see this going? Will it be used in lots of mainstream sports?