This year’s Lyrid meteor shower coincides with Earth Day, but light pollution is ruining the show

Light pollution makes it hard for many people to appreciate the stars. 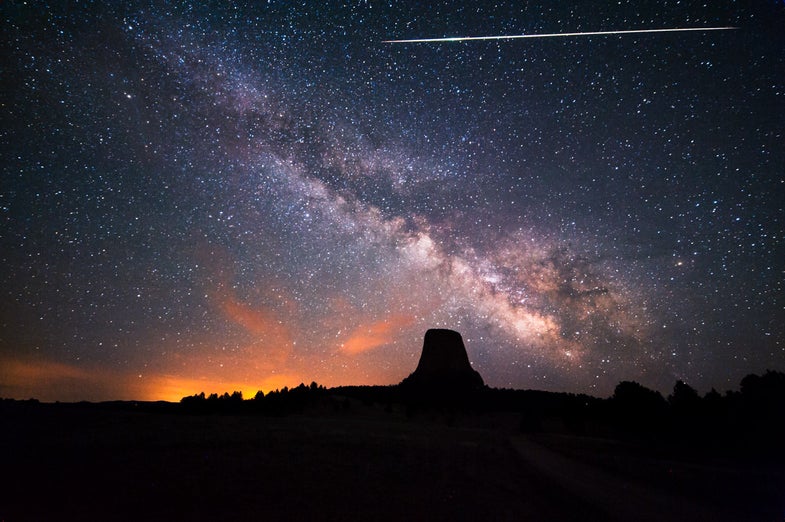 On Sunday we’ll all hear a lot about the importance of recycling, planting trees, and saving energy by turning out the lights. It can be hard to appreciate the way enormous environmental problems actually impact our lives, but this year there’s a perfect opportunity: just try star gazing. This weekend, the Lyrid meteor shower and Earth Day happen to coincide.

The Lyrids are one of the year’s most impressive displays of shooting stars, and though most Americans can stand outside and spot a few streaks, the vast majority won’t really be able to appreciate the view. Light pollution has just gotten too bad.

It’s only recently that we’ve been able to study global light pollution, since it required satellites capturing enough data to discern relative light intensity in certain areas. NASA has done work on it periodically, but the biggest and most thorough study came out in 2016. The researchers found that from Washington D.C. all the way up to Boston, almost no one can ever see the Milky Way. Nearly 80 percent of North Americans can’t see it at all, and in total 83 percent of the entire world’s population live in light-polluted conditions.

Seeing the Milky Way might not seem like a big deal, but it’s a good barometer for just how little of the night sky we can appreciate in modern times. In truly dark conditions, the Milky Way is spectacular. It’s unbelievably bright, almost to the point of being eerie if you’re not used to it hanging above you in the night sky. Even just seeing stars, unadulterated by ambient light, is a magical experience. And that’s actually one of the reasons scientists want to preserve our view: Pure awe.

That 2016 world atlas study noted in its introduction that “In addition to hindering ground-based optical astronomical observations, the artificial brightening of the night sky represents a profound alteration of a fundamental human experience—the opportunity for each person to view and ponder the night sky.” For most of human history we could all simply look up and appreciate how tiny our place in the universe truly is, but now 99 percent of the U.S. and European population live in constant light pollution. Just take a look at the map that study produced:

Red areas denote places where there’s enough constant nighttime light to be as bright as a pristine sky would be at twilight. You’d never expect to see the stars, much less the Milky Way, at twilight—yet large swaths of the world live in perpetual twilight conditions.

Anyone living in the orange areas can’t see the Milky Way at all, whereas those in yellow parts can see it during the summer (when it’s strongest), but can’t during the winter.

If this seems impossibly widespread, it’s probably because we underestimate how far light travels. The ambient luminosity around Las Vegas and Los Angeles can be seen from Death Valley National Park, even though those cities are 100-plus miles away. The authors of the 2016 study note that this is precisely the problem with light pollution: “It affects even otherwise pristine sites because it is easily observed during the night hundreds of kilometres from its source in landscapes that seem untouched by humans during the day, damaging the nighttime landscapes even in protected areas.”

There are still some places where you can appreciate the night sky, and a few organizations are trying to keep it that way. The International Dark-Sky Association allows parks and monuments to apply for designation as a dark sky location, and then follow rules that limit light pollution. You can visit these locations to get a sense of what you’re missing. Most of the locations in the U.S. are national parks, since they already have regulations that prevent urbanization and have easily identifiable (and therefore enforceable) borders. We’re lucky to live in a country that’s geographically large enough to accommodate those spaces. Many Europeans would have to travel across country borders—and often outside of Europe itself—to reach an area unaffected by light pollution.

Some towns and cities are trying to combat the problem by installing LED lights with shades that direct the brightness down instead of up toward the sky. A few are considering timers or motion-activated streetlamps—they’d only turn on when people or cars were nearby.

But none of that will impact you this weekend. Most of you reading this article are probably too far from the nearest dark sky preserve to truly appreciate the Lyrids. So enjoy the shooting stars you can manage to spot (here’s a guide on how best to do it, plus how to photograph it!) but also take Earth Day as a reminder to plan for the future. Take a trip out to some remote place—you can find a dark sky area with this handy map tool—and just look up. See what the night sky looked like to your ancestors. It’s hard to appreciate just how awe-inspiring the stars can be until you actually, really truly see them in all their glory. You’ll never feel the same way about light pollution again.

And once you’re feeling all motivated by your newfound passion for the dark sky, here’s how you can help:

Step one is just to turn off outdoor lights at night. Plenty of people, especially in suburbia, have decorative lights—if you’re not outside enjoying them, shut ‘em down. Buy light-sensing switches so that bulbs only turn on when someone’s at the door or entering the garage.

You can also replace your outdoor lights with less polluting fixtures and bulbs. The International Dark-Sky Association has a seal of approval that you can look up to find non-polluting products.

While you’re at it, join your local IDA chapter! The folks at IDA actively push policies to improve light pollution, so supporting them can help enact change at a higher level. The more support they get, the more power they have to lobby congress members and town councils to revise the way they light their streets and houses. And the good news is that, unlike global warming, light pollution is an environmental problem that could be solved in the short term. It disappears as soon as we take action—all we have to do is flip the switch.