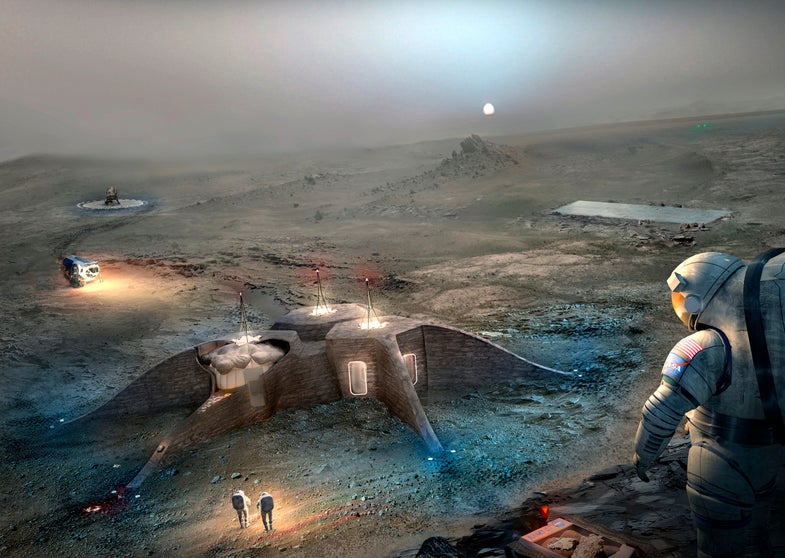 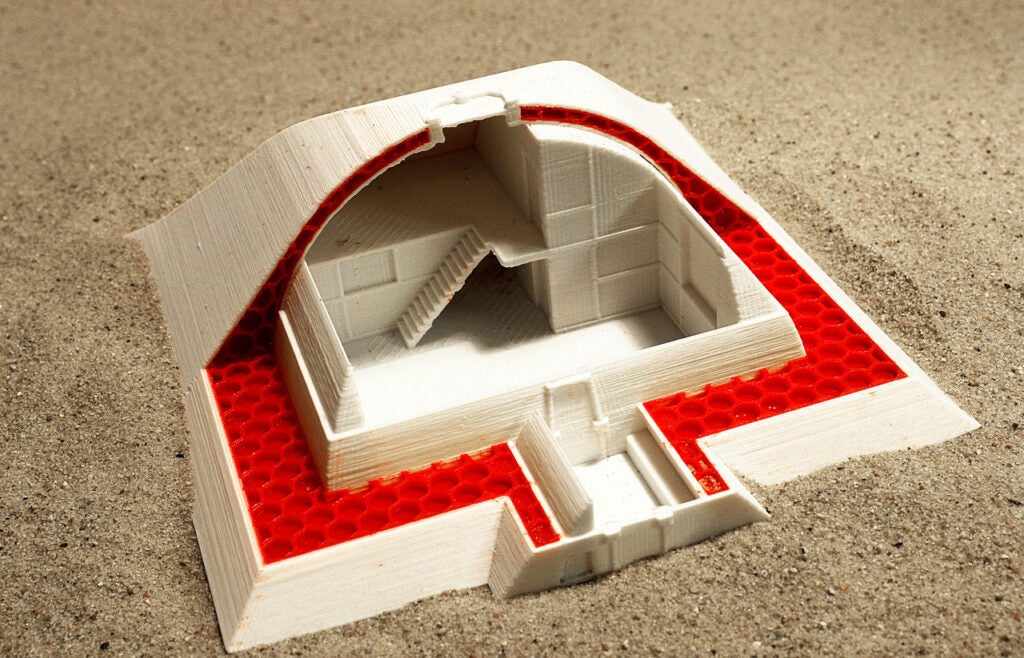 On Earth, “cloister vault” domes have stood the test of time, forming architectural marvels that stand upright for thousands of years. Tomasz Dzieduszynski is hoping they’ll prove equally durable in the harsh Martian landscape. His habitat concept uses an inflatable scaffolding to guide 3D-printing robots, which would deposit a cement made from Martian soil. The habitat’s layer of honeycomb-shaped insulation is intended to protect against radiation and small meteorites. 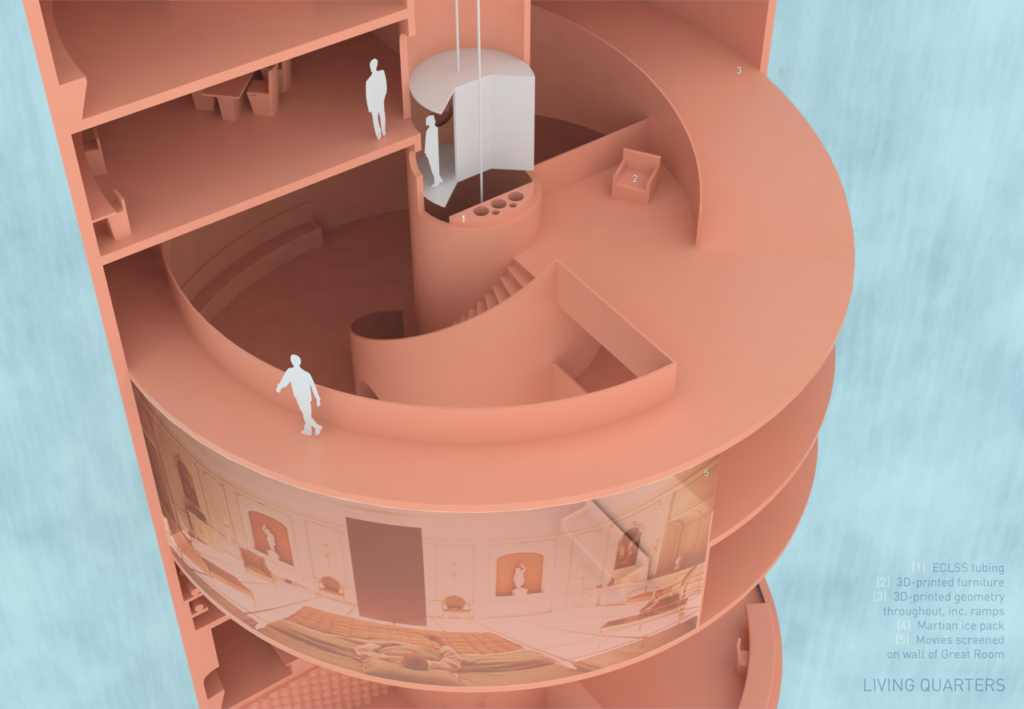 This spiraling underground structure would live beneath a frozen sea near Mars’ equator. Excavation of the ice could potentially free up drinking water, and placing the structure underground helps to shield Martian explorers from radiation. 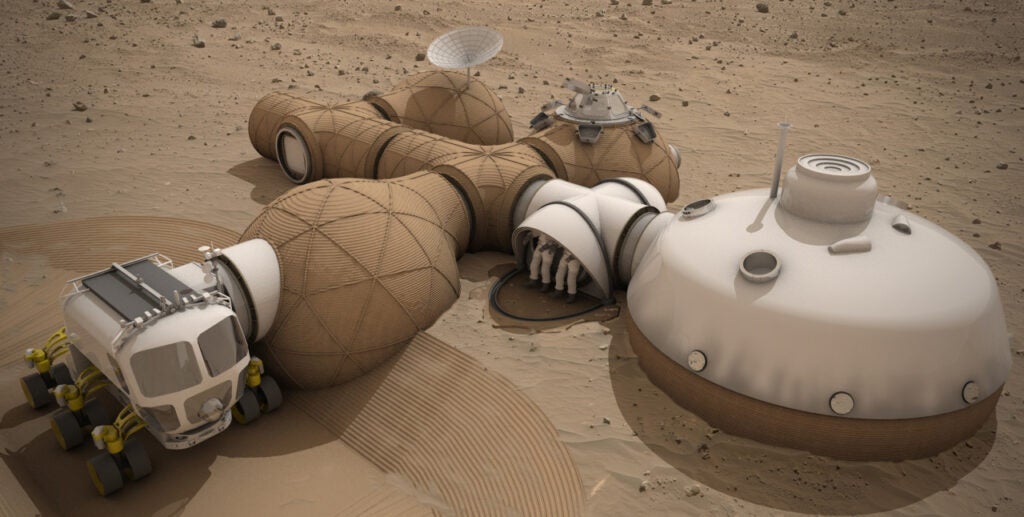 This team decided to take advantage of inflatable space habitats–perhaps like the ones Bigelow Aerospace is developing. Like tents, these structures could be deflated during the long journey to Mars, to save room in the spacecraft, then pop open once they reach their destination. But Team LavaHive takes it a step further by connecting the inflatable shelters via tunnels and mini habitats built from sand. 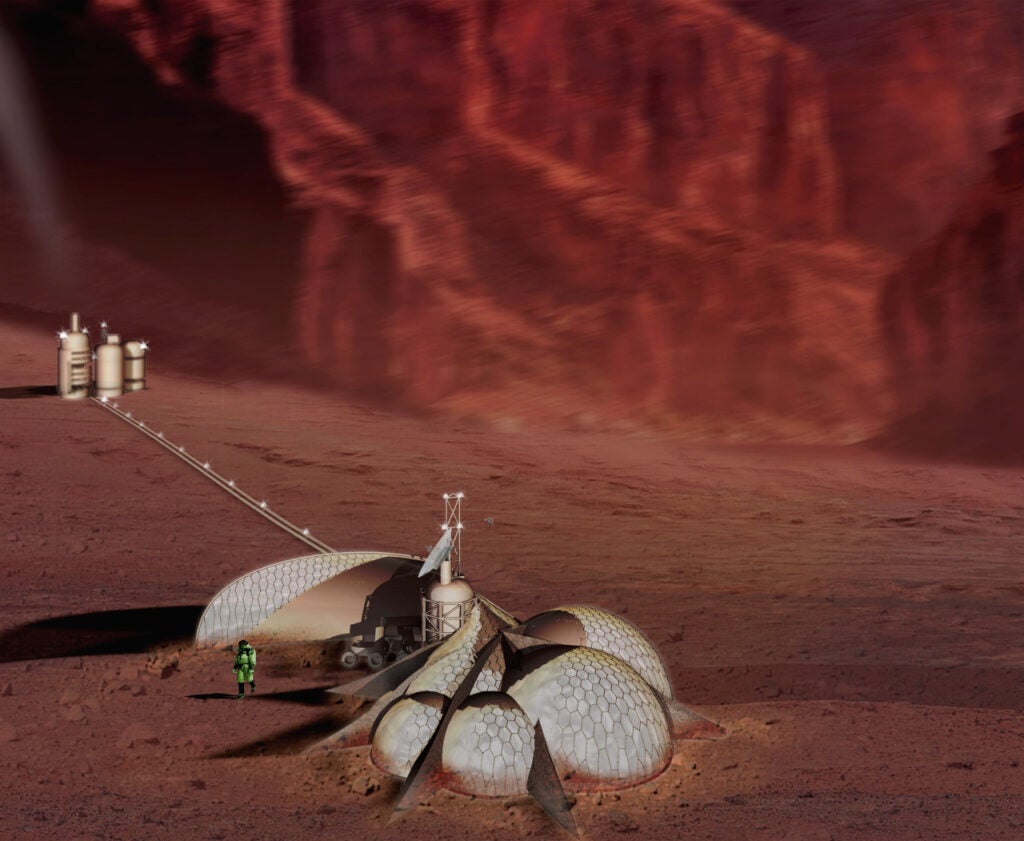 Martian sand contains two valuable resources: iron and silica. This team proposes to isolate these elements from the soil and use them to create a bulbous structure comprise of an iron latticework paned in a granite-like silica. “The resulting steel and silica forms will serve as bunkers,” they write, “protecting the Martian inhabitants against solar radiation, small bolide impact, strong prevailing winds, and related sand storms.” 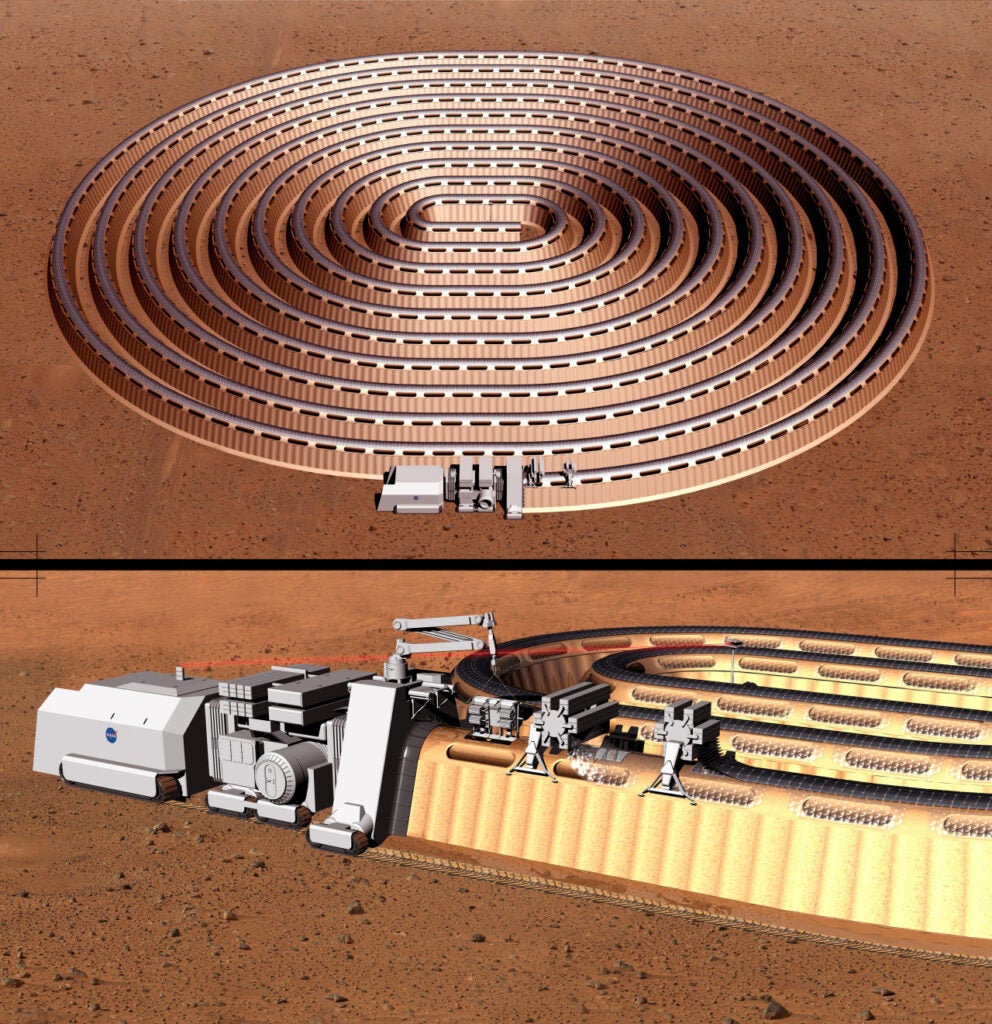 Rustem Baishev is preparing for the day when Mars becomes a heavily populated tourist destination. His labyrinth-like design can expand indefinitely, built by a “nuclear powered crawling extruder” which mixes the Martian soil with a bonding agent and shapes it. 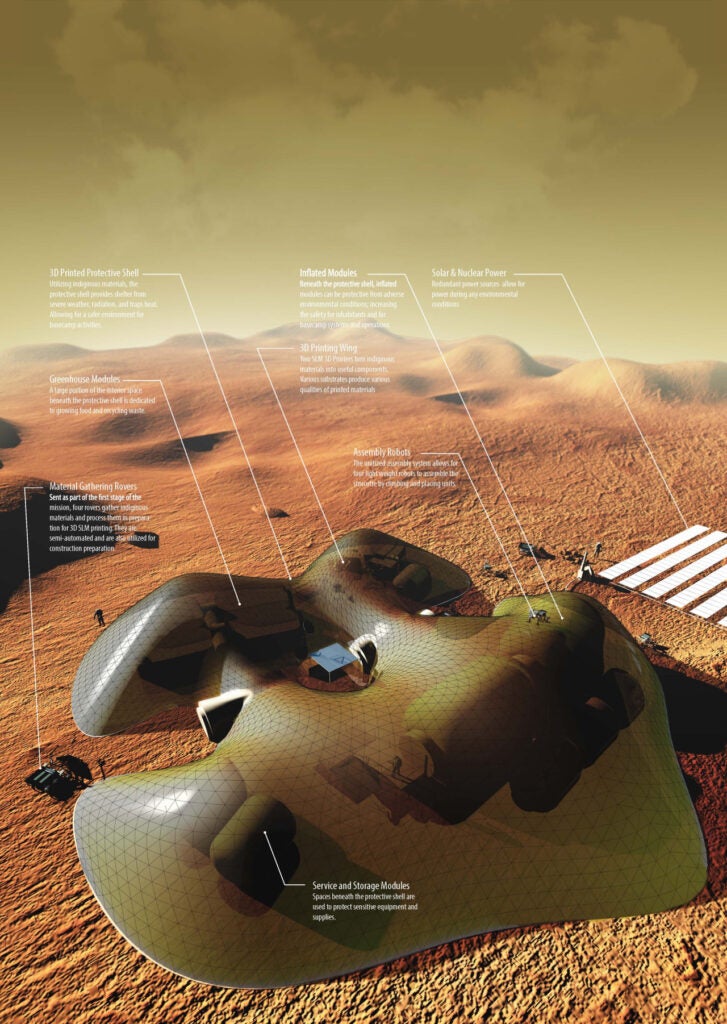 It may look like a booger, but this is a pretty cool design. Inflatable living modules are encased in a locally sourced 3D-printed glass dome, giving astronauts a sort of “front yard” on Mars. 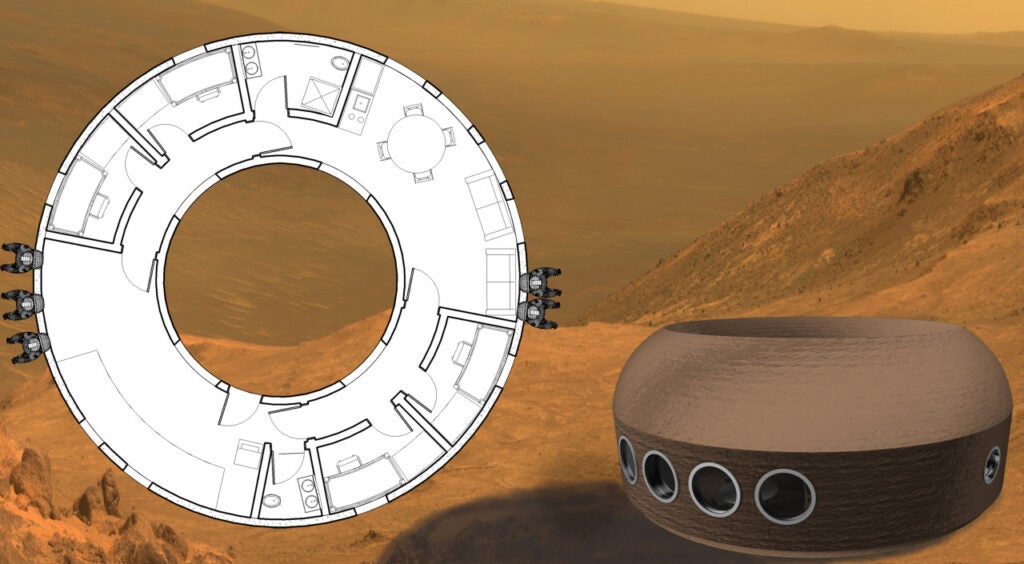 The appropriately named Donut House would be made out of a basalt clay reinforced with fibers. The ring-shaped design allows for partitioning the habitat into different segments, so that if one section gets damaged by, for example, a meteorite, the other sections can still provide shelter to astronauts. 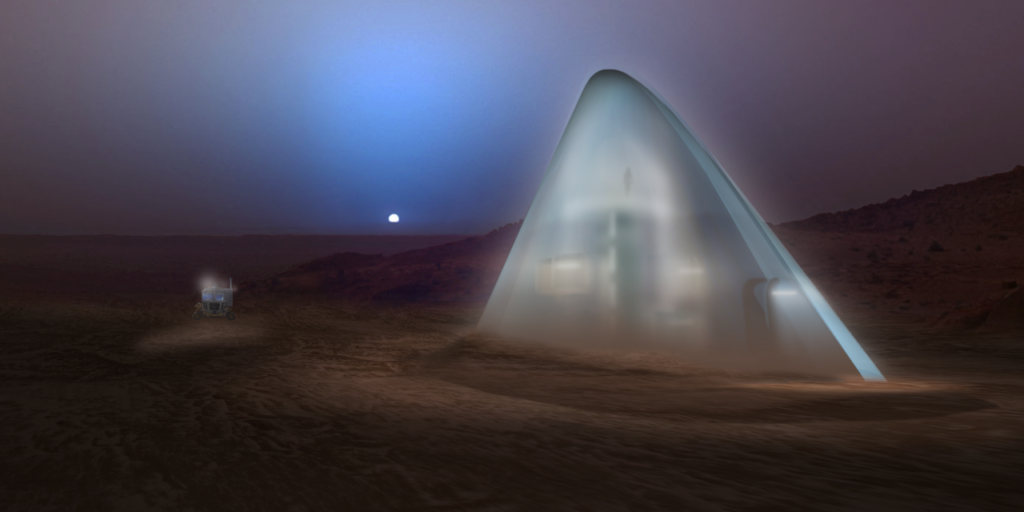 Instead of using soil as a building material, this team decided to “follow the water”. After mining the ice at Mars’ northern pole, they propose to use a unique 3D-printing process that “harnesses the physics of water” to construct a radiation-proof shelter. “Ice House is born from the imperative to bring light and a connection to the outdoors into the vocabulary of Martian architecture,” they write.
3-D printing
additive manufacturing
Mars
moons
Space