The most high-flying aerospace innovations of 2021

A major airline turns to artificial intelligence for help, a drone that can refuel fighter jets, and more airborne innovations are the Best of What’s New. 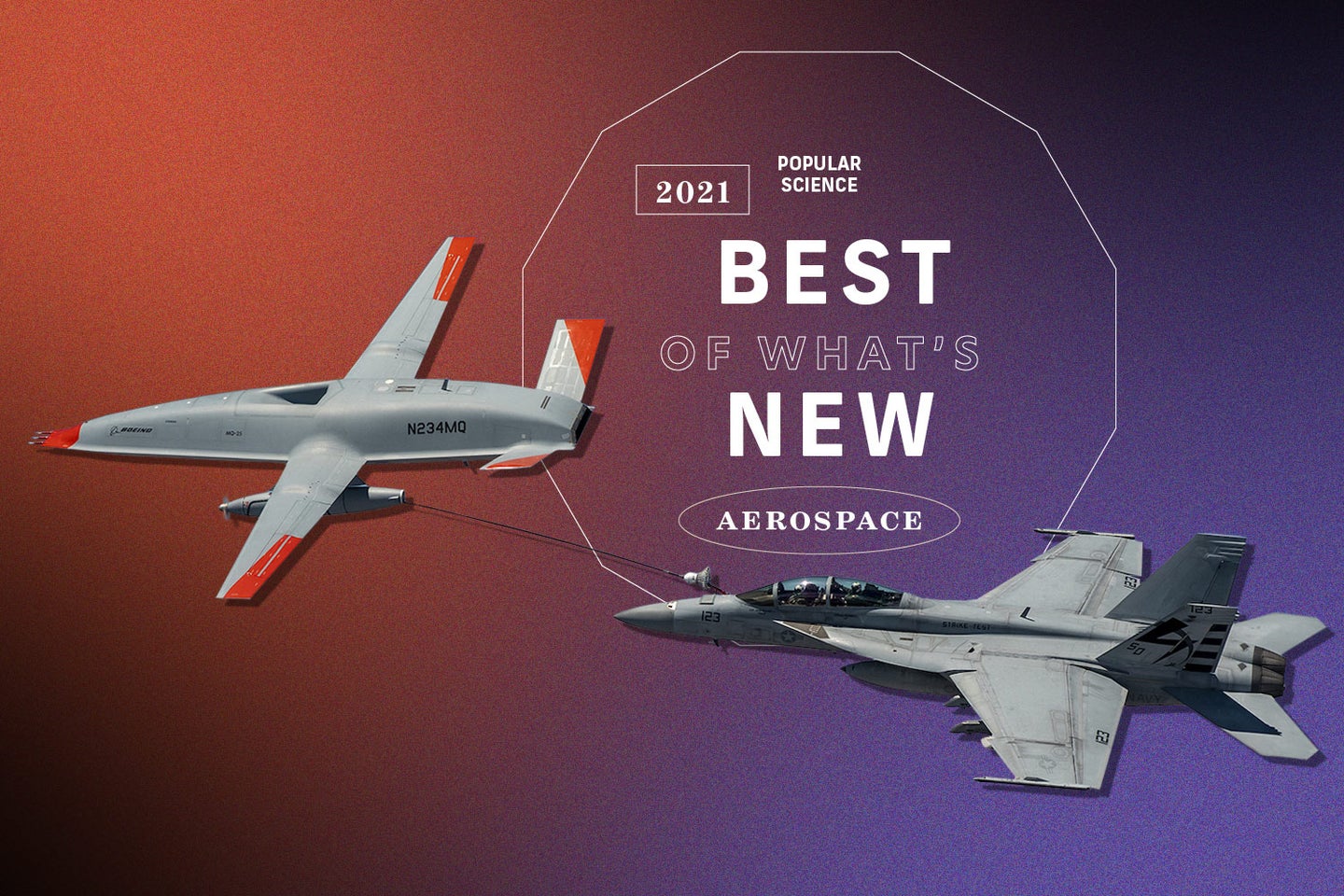 Augmented reality, artificial intelligence, and autonomy are just some of the technologies that elevated our air and space game in 2021. AI algorithms are helping route aircraft in more efficient ways, virtual enemies are training pilots mid-flight, and autonomous wingmen are scouting the skies ahead. Meanwhile, up in space, a NASA probe is going to sail beyond Earth’s orbit on sunlight. It might all seem like flashy, futuristic stuff, but one winner represents a small but impactful perk for passengers: On some United flights, you can now use wireless headphones to connect to the seatback entertainment system via Bluetooth. Finally!

Take a flight between any two airports, and a dispatcher at the airline also serves a key purpose: They decide in advance what route the aircraft will take along the way, filing a flight plan with the FAA before takeoff. These humans working on the ground must consider variables like weather, restricted military airspace, and more. Often, they just go with a pre-existing option. Now, at Alaska Airlines, the dispatchers have an AI helper. Created by startup Airspace Intelligence, the software can suggest bespoke routes between cities, which the dispatcher can then accept or not. The suggestions result in an efficiency boost: Alaska Airlines says that since they started using the system, more than 28,000 flights have had their routes optimized, saving an estimated 15.5 million pounds of fuel and thus 24,490 tons of carbon dioxide emissions. The flights tend to land a couple minutes sooner, and not only that, the airline also has a more precise sense of when a plane will actually touch down. Passengers, meanwhile, will hopefully spend less time just circling the airport, waiting to arrive.

SpaceX is betting its future on one very large vehicle. The approximately 165-foot tall stainless steel Starship aims to reach Earth’s orbit, the moon, or even Mars, and then return in one piece by landing vertically. In the future, the fully reusable spaceship could even ferry people and cargo across the globe in less than an hour. Elon Musk’s science-fiction dreams have been slow to achieve lift off—the first handful of test flights ended in spectacular fireballs. But in May, a Starship prototype finally nailed its landing, showcasing a complex “bellyflop” maneuver that involved a horizontal free-fall from miles in the sky before the craft righted itself just above the launchpad. In the following months, the company began building colossal booster rockets to prepare for the first orbital test of what could become the world’s most powerful and affordable launch system.

A Bluetooth connection in the sky

Plugging in headphones while trying to catch Frozen II on your seatback entertainment system is very last-century. No longer: Starting this past summer, passengers on any United 737 MAX 8 aircraft could simply connect to the Panasonic system in front of them via Bluetooth with their own headphones (AirPods or otherwise). A metal tube full of competing wireless signals represented a complex problem to solve, but in the end, those Disney songs never sounded so good.

Military pilots train in simulators on the ground or in real aircraft in the sky, but new technology from a company called Red 6 blends those two ideas. A fighter pilot can don a helmet with an Airborne Tactical Augmented Reality System (ATARS) while flying in real life, and see virtual adversaries or airborne friendlies alongside them on their visor. That creates a much more realistic scenario than simply simulating the presence of a fictional aircraft on a plane’s radar: Fighter pilots can have the benefit of training in simulated multi-plane exercises in the sky. The tech also avoids the cost and logistical complexity of getting multiple real aircraft airborne. Red 6 is in the process of retrofitting a T-38 training jet with ATARS for the Air Force, and could do the same with an F-16 next.

To navigate space, probes fire their thrusters and spew a trail of hot gas behind them. But the shoebox-sized Near Earth Asteroid (NEA) Scout, which NASA engineers readied for launch in July, will traverse tens of millions of miles pushed along almost entirely by sunlight. The spacecraft’s school bus-sized solar sail is made from a tough, Saran-wrap-like plastic that catches sunbeams as the probe leaves our planet behind. This tech builds upon previous prototype demonstrations in low Earth orbit, such as LightSail 2. Over the course of two years, NEA Scout will adjust its speed by 5,000 mph or more, enough to match the pace of an asteroid, map most of its surface, figure out what it’s made of, and determine if it’d be a good target for human exploration. It costs around $30 million, roughly a tenth the price of a bigger, fuel-laden mission.

Bricks made from ‘moon dust’

If humans ever build dwellings on the moon, the secret to affordable lunar construction might lie in three gray, palm-sized bricks, whose humble appearance belies their extraordinary roots. The slabs emerged from a 3D printer aboard the International Space Station, which squeezed them out in near-zero gravity about 250 miles above Earth. They are made largely from simulated moon dust, or “regolith,” which includes compounds like silica and alumina. Astronauts installed custom attachments to the printer, which let the device fuse regolith rather than its usual plastic—a first for 3D printing in space. The simulated moon bricks splashed down on the pale blue dot in September and are being tested for strength. Researchers hope that supersized versions of the machine will someday turn real moon dust into essential infrastructure, such as lunar roads and landing pads.

The brains for a robotic wingman

Losing a drone flown by an AI is much less costly than losing an F-35—and the person in it—which is why the Air Force’s vision for the future includes fighter-jet-like drones partnered up with traditional aircraft. These robot planes could fly ahead of the ones with pilots to send back intel or carry out a weapons strike in dangerous territory. The Air Force’s Skyborg program doesn’t want to wed the intelligence to any specific hardware, so it’s developing the Autonomy Core System, or ACS, to pilot different makes of drones. The system has already been used to fly a drone from a company called Kratos, as well as multiple General Atomics MQ-20 Avenger drones.

A plan to safely usher satellites to the afterlife

More than 3,000 dead satellites circle the globe today. Astroscale, a company founded to combat this growing challenge, is demonstrating one way to drag future satellites out of the sky when their time is up, pulling them down into the atmosphere to burn up in a controlled way. In March, it launched its ELSA-d spacecraft, which features a magnetic ring that can snap onto any other satellite equipped with a matching component; in August, it released a nearly 40-pound box and captured it during a test run. Next, mission controllers will task ELSA-d with a much more daunting job: using sensors to semi-autonomously chase down and snag the same box while it’s spinning out of control. If it succeeds, the vehicle will pave the way for a larger model capable of dealing with compatible satellites weighing up to 1,750 pounds.

A drone that refuels fighter jets

When one of the Navy’s F/A-18 Super Hornet fighter jets needs more fuel while it’s in the air, another Super Hornet does that job. But those jets are designed to fight, not be gas pumps in the sky. Enter the MQ-25 Stingray. Already in tests this year, the 51-foot-long drone has refueled an F/A-18, F-35C, and an E-2D, making history as the first uncrewed aircraft to fuel up another aircraft. Eventually, these drones should be able to take off and land from aircraft carriers, freeing up the fighter jets that had helped with refueling in the past for their primary mission. The Navy may buy as many as 70 of them.

A new state-of-the-art outpost now orbits the Earth. China launched the core module of what will become the Tiangong (“heavenly palace”) space station on April 29, and the floating habitat is currently hosting its second group of occupants. Tiangong will measure about one-sixth the size of the International Space Station’s when it’s completed in 2022, but it already features bells and whistles missing from the aging ISS: The three-person crews can now enjoy hot meals during their months-long stays, courtesy of a custom microwave designed for use in space. And, in a first for a crewed vehicle, the module is equipped with four ion drives—hyper efficient thrusters that use electricity to expel charged particles.