These shape-shifting robots could make for great furniture in space

The electromagnetic bot blocks could be handy for building in those tight quarters aboard spacecraft. 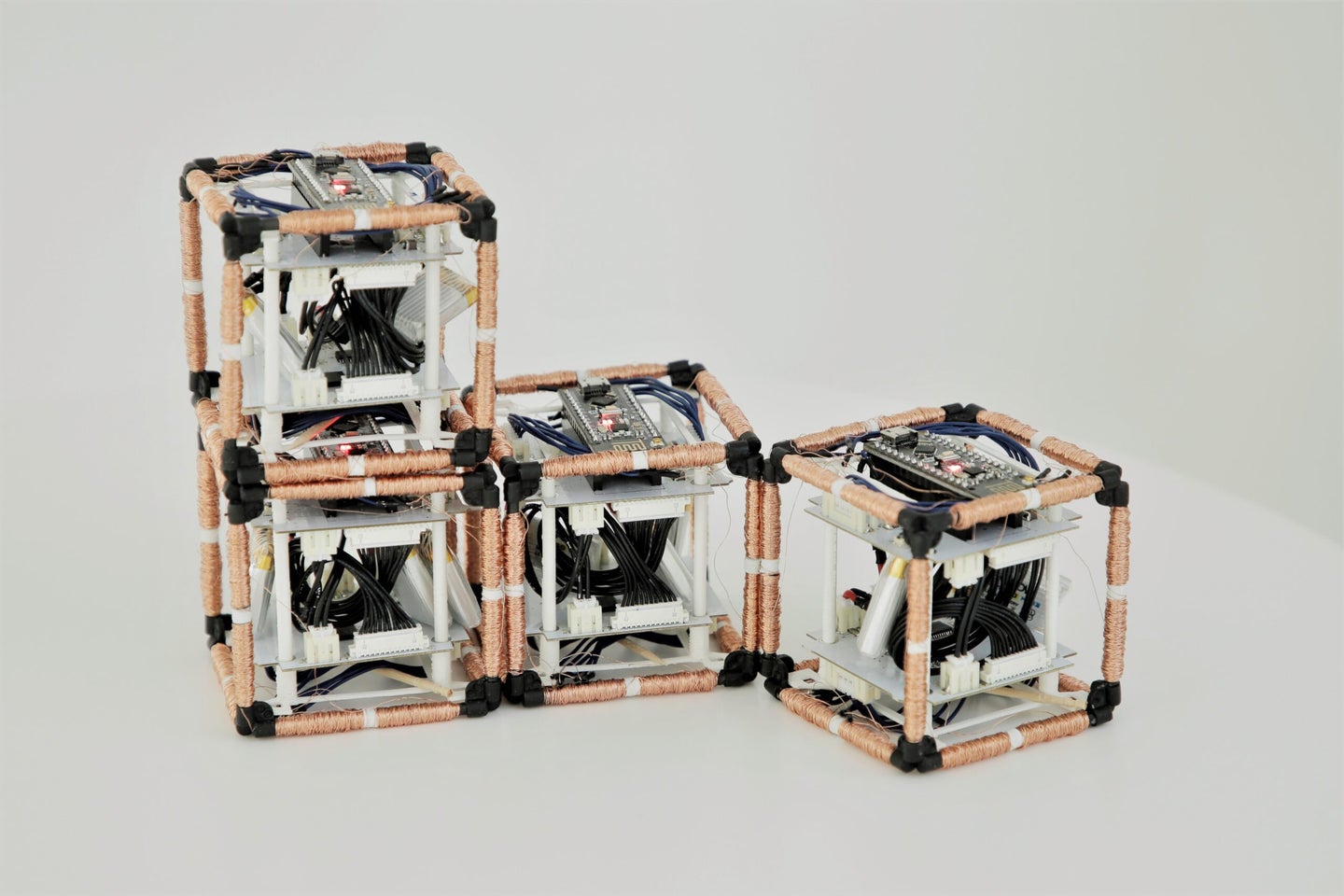 These little bot blocks can reconfigure into various shapes and might one day help astronauts build in space. Jimmy Day/MIT Media Lab
SHARE

What would it be like if a robot could at one moment be a table, and then transform itself into a couch? For decades, roboticists have been chasing the idea of reconfigurable devices, but now one project has discovered such multifunctional machines could also be super helpful to build in space where astronauts have limited tools and room aboard spacecraft.

Using electromagnetism, scientists at MIT’s Computer Science and Artificial Laboratory (CSAIL) created cube-shaped robots that can be assembled into complex shapes. The robotic space blocks are described in a paper that will be presented at the 2022 International Conference on Robotics and Automation.

While small in size, these shape-shifting, wireless prototypes called ElectroVoxels have some pretty big applications for space exploration, the research team says. The ElectroVoxels were inspired in part by the modular robots in the film Big Hero 6, says Martin Nisser, Ph.D. student at Massachusetts Institute of Technology and lead author of the study. Instead of one robot with a single use, the smaller modules can come together to build multiple types of structures of various functions.

Since the robots are so small, the project has a greater number of wide-ranging applications for space than it does on Earth.

“Many would argue that it’s more challenging to build things in space than it is on Earth, because you have all these constraints on what you can launch,” says Nisser. “Everything that you want to send to orbit has to fit within the confines of a rocket fairing, you’re really limited in terms of mass and volume.”

For instance, quarters are so cramped on the International Space Station that even furniture for astronauts has to be compact and oriented to fit optimally, almost like a game of Tetris.

Although building objects in orbit can be more trouble (and expensive) than it’s worth, there’s been a major push to shrink down the size of technology to further space exploration. Spurred on in part by the advent of Cubesats in the early 2000s, today’s current trend of miniaturization could help provide astronauts more room to maneuver, but could also bring down the costs of rocket payloads.

“Putting something in space on a rocket is super expensive,” says Zachary Manchester, an assistant professor at the Robotics Institute at Carnegie Mellon University, who was not involved in the study. (According to NASA, it costs about $10,000 to carry a pound of payload into orbit.) “If you can shrink things down and pack more of them into a rocket, it makes emitting everything cheaper.”

ElectroVoxels offer a cheap, and easy-to-build solution: The electromagnetic lining of the 3D printed frames allow cubes to seamlessly attract, repel, or even turn themselves off. One cube takes a little over an hour to make, and only costs 60 cents.

Inside each block, 3D-printed circuit boards and electronics work together to send currents that direct its movements, much like how the autobots in the Transformers franchise move smaller parts to create larger, new forms. But to put these cubes in motion, Nisser and his team had to design software so that would allow users to manipulate them into whatever shape they see fit. The simulation allows users to control up to a thousand ElectroVoxels at a time, or choose from a series of predefined motions to create reconfigurations.

Manchester says the project’s approach differs from many similar ideas that have relied on autonomous networks, or multi-agent robotics systems, wherein each bot within the larger network is individually intelligent. But because these ElectroVoxels aren’t powered by AI, users have more freedom to create shapes beyond what a computer could potentially accomplish.

“The whole is greater than the sum of the parts, where you can do cool things collectively with lots of little spacecraft or little robotic systems,” Manchester explains.

There is a downside, Manchester points out. Outside a zero gravity environment, the cubes don’t work. Although ElectroVoxels have already been tested in a parabolic flight, which can simulate microgravity, it would be hard for them to gather enough force to maneuver around back down on Earth, according to Manchester.

Nisser and the team eventually want to make the cubes strong enough to move against Earth’s gravity. This would allow these robots to alleviate tight living conditions in outer space, and allow humans to build large-scale, reconfigurable operations on the ground.

“I’m really excited about the kind of long-term prospects of this to try and to be able to deploy this out here on Earth,” Nisser says.