Comets Could Have Kickstarted Life On Earth And Other Worlds Comets are typically associated with extinction. However, there is growing evidence pointing to their ability to “seed” or create life on planets, a controversial idea, but one boosted by a groundbreaking experiment that re-created a comet impact as it would have occurred on a young Earth.

Some of the most exciting information obtained from the European Space Agency’s Rosetta mission — which involved landing a spacecraft called Philae on the Comet 67P — was the discovery of organic materials on its surface, which the Philae lander “sniffed” out with its instruments.

This wasn’t the first time organic compounds were found on a comet. In 2009, NASA’s Stardust spacecraft sent a return capsule back to Earth, which contained glycine, an amino acid that the probe collected as it passed through the cosmic dust emitted by the comet Wild 2.

In a study published in Geochemical Journal, researchers demonstrated that the impact shock of an icy comet containing these organic compounds could generate peptides, the building blocks of proteins, and all of life as we know it.

Given that comet impacts were more common early in Earth’s formation, this research not only informs about the potential origin of life on our planet, but of the potential of life on other planets as well. The research was presented at this year’s Goldschmidt geochemistry conference in Prague.

“There may be chemical evolution occurring on other planets or satellites”

The team at Nagoya University froze a mixture of amino acid, water ice, and forsterite (a silicate found on comets) with liquid nitrogen to around -321 Fahrenheit. Then, they proceeded to shoot out the encapsulated concoction with a vertical propellant gun the size of a two story house, at a velocity of up to 1430 meters per second, in order to simulate the conditions of an icy comet smashing into a planet. A chemical analysis of the post impact samples showed that the shock caused some amino acids to synthesize into linear peptides of up to three units long. 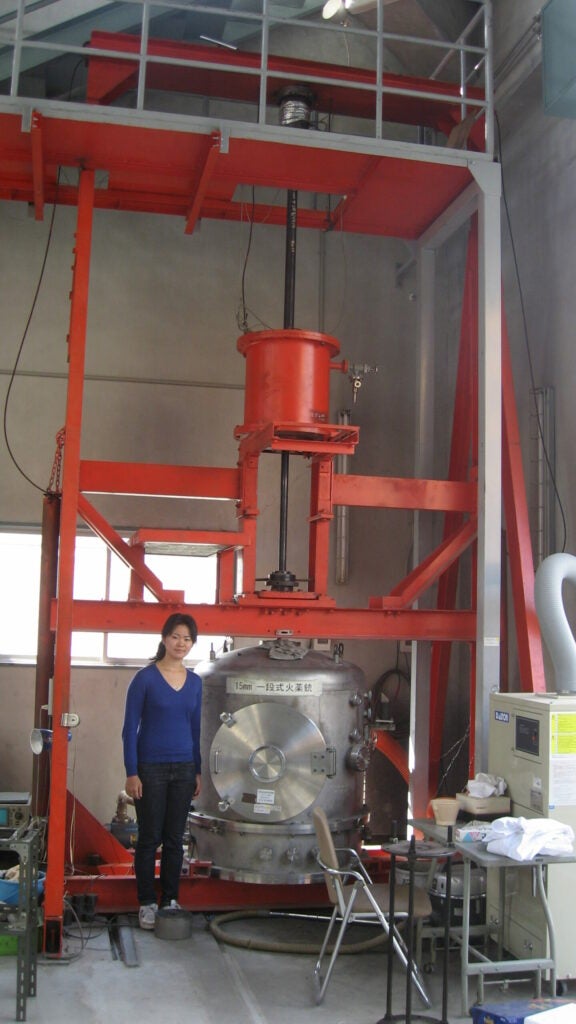 Haruna Sugahara, lead author of the study, stands next to a vertical propellant gun.

“Comet impacts might have had a key role in chemical evolution,” says Haruna Sugahara, lead author of the study. “It is possible that comets are delivering peptides to other extraterrestrial bodies, and that there may be chemical evolution occurring on other planets or satellites.”

Sugahara’s experiment shows the importance of frozen conditions in the formation of short linear peptides, which, once formed, don’t require as much energy to create longer more complex chains in terrestrial or aquatic environments. This experiment gives even more promise to the potential of finding life on icy worlds such as Jupiter’s moon Europa, says Sugahara. Europa was not only intensely bombarded by comets in the beginning of the solar system, but is believed to have an ocean underneath its frozen surface more than twice the size of Earth’s.

“On icy satellites like Europa there will be a lot of peptides synthesized by comet impacts,” Sugahara says. “This is a quite suitable place for the emergence of life.”

NASA plans to send a probe to Europa sometime in the next decade, so it’s time to start getting excited for whatever lies ahead.