Did a male contraception study prove men are wimps? Not exactly.

The internet is freaking out over male birth control for all the wrong reasons. 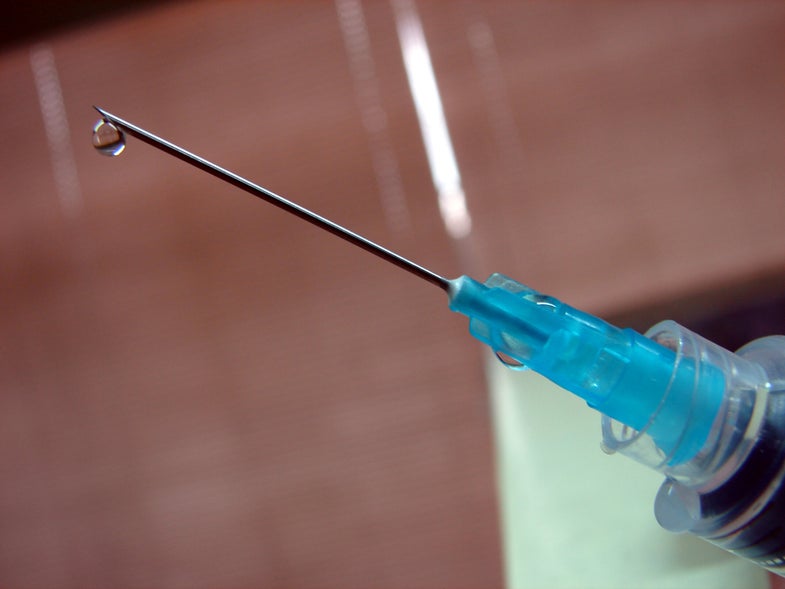 A recent study on male birth control is making the rounds, and for good reason: The drug trial had a 96 percent success rate, a pharmaceutical light at the end of the tunnel after nearly 60 years of women bearing the brunt of responsibility for preventing unwanted pregnancies.

Unfortunately, the trial ended early—which is something you’ve probably already read about on Facebook. Yes, this promising male birth control study was halted because of concern over side effects like mood changes and increased acne.

For women with years of hormonal birth control use under their belts, the irony is almost too much. So it’s no surprise that lots of publications have rolled their eyes at the helplessness of men. But here’s the thing: The researchers were actually right to halt the study.

Is this disparity between acceptable side effects in male and female birth control sexist? Yes. But if you take a closer look at the new study, which is set to be published in an upcoming issue of the Journal of Clinical Endocrinology & Metabolism, you’ll find that the whole truth is more complicated.

What actually went down?

First of all, no one is about to put male birth control on the market. The new study was a Phase II trial—part two of a three step process to FDA approval. In a nutshell, each phase scales up the study until researchers have enough data from enough people to know how safe and effective a drug is at what doses, as well as what and how common the side effects might be. The researchers were testing a particular cocktail of injectable hormones that suppress sperm production in the hopes they might one day be used in a marketable birth control.

From an efficacy standpoint, this cocktail seems like a big success: Of the 266 men who provided enough data to be considered in the study, just 4 impregnated their female partners while receiving bi-monthly injections. That’s comparable to the failure rate of the female hormonal pill (or at least the failure rate seen with “typical use”).

But—and this will surprise no one who’s ever taken hormonal birth control—there were some side effects. Around half the participants saw an increase in acne, which is a common side effect of hormonal contraception, and around a quarter experienced pain at their injection site (which is a common side effect of injections, duh). There were also reports of muscle pain in 15 percent of participants. A few men took more than a year to start producing sperm again after their injections ceased.

The real concerns were behavioral changes. More than a third of the subjects had a noted increase in libido, and 20 percent experienced some kind of “mood disorder” that seemed related to their treatment. There was also one suicide within the study, though the researchers have deemed it unrelated.

The issue isn’t that the men were turned off by acne and arousal. In fact, 75 percent of the participants said that they thought the birth control was worth the side effects they dealt with. The problem is that the mood-related side effects were unexpected: You don’t want your side effects spiking up every time you increase your study size a bit, and that’s what happened as researchers moved from Phase I to Phase II.

“While the study was going on, the research team had to report regularly every year to the review board on the progress of the study,” says study author Mario Philip Reyes Festin, MD, of the World Health Organization in Geneva, Switzerland. “It was during one of the regular reviews that it was noted that the frequency and severity of side effects, especially mood swings and increased libido, were higher than anticipated based on earlier, smaller studies of the same or similar drugs.”

OB/GYN and science communicator Jen Gunter, MD (who wasn’t involved in the study) elaborates on this issue in a recent entry on her blog: The side effects were unexpectedly high and seemed skewed to certain testing centers. That suggests that perhaps the drug is riskier than previously assumed, or simply that one or many of the testing centers weren’t running particularly good trials. Neither option is good – you want to know that drug trial results are providing an accurate picture of the drug’s typical effects, not skewing one way or the other.

“Studies of this kind often reveal that experimental regimens need to be further modified or optimized before further clinical testing,” Festin says. “The side effects of concern, particularly some of those related to mood and libido changes, interfered with the participants’ quality of life and were frequent and severe enough the review panel required study termination in order to ensure the safety of the study participants in this early stage proof-of-concept study.”

Why this still kind of sucks for women

This is the way we want clinical trials to work, so perpetuating the myth that whiny men couldn’t hold their hormonal birth control isn’t great. Yes, it’s ridiculous that woman are expected to accept the gamut of negative side effects to avoid pregnancy. But halting a trial because something seems fishy is never a bad idea. And it’s not as if the 20 men who dropped out of the trial before it was cut short are outliers. “Women drop out of contraception studies all the time too,” Gunter writes on her blog, “and it doesn’t mean they are wimps.”

Not even a little.

As Snopes reports in its thorough debunking of the whiny male narrative, female birth control first got its sea legs in an entirely different era. When the pill was developed in the 1950s, the FDA’s controls were far less stringent than they would be even a decade later, and the drug was approve pretty hastily. In fact, the pill was first marketed as a treatment for severe menstrual symptoms to avoid moral outcry. Unsurprisingly, there was a sudden, massive uptick in the number of women who reported debilitating periods. Point being: No one was looking too closely at how hormonal birth control affected the people it was being sold to. Sexism was (even more) rampant, the FDA was sleeping on the job, and the average young woman had even more to lose from an unplanned pregnancy than she does today. The world embraced the pill with all of its faults, and many of the potential side effects of hormonal birth control are still being unpacked today – as evidenced by recent studies examining the potential link between birth control and depression in young women.

Would the pill of 1957 make it through FDA trials today? We hope not. Would this new contraceptive cocktail for men have passed muster in 1957? Maybe, but we’ll never know.

The premature ending of this particular study isn’t as bad as it sounds. There’s hope yet for male birth control—a few recent surveys have suggested that more than half of men would like to try it in theory, and you’ll recall that a promising 75 percent of the participants in the new study were pleased with the real thing—and there’s even hope for the hormonal combo used in the study. Better experimental methods might make the unusual uptick in side effects disappear, or lower doses might alleviate pesky mood symptoms.

“There remains considerable interest in testing other substance or doses of these or similar drugs,” Festin says. “Funding for male contraceptive development is limited, but based on the broad public interest and engagement that we’ve seen over the last week, this represents a clear opportunity opportunity to advocate for funding to continue research that will meet the needs of men who want to play a greater role in controlling their fertility.”

The world needs more equitable access to birth control. But that doesn’t mean we should ask for shoddy research in order to get us there.