Yes, you really can work yourself to death

Stress and sleeplessness are surprisingly lethal. 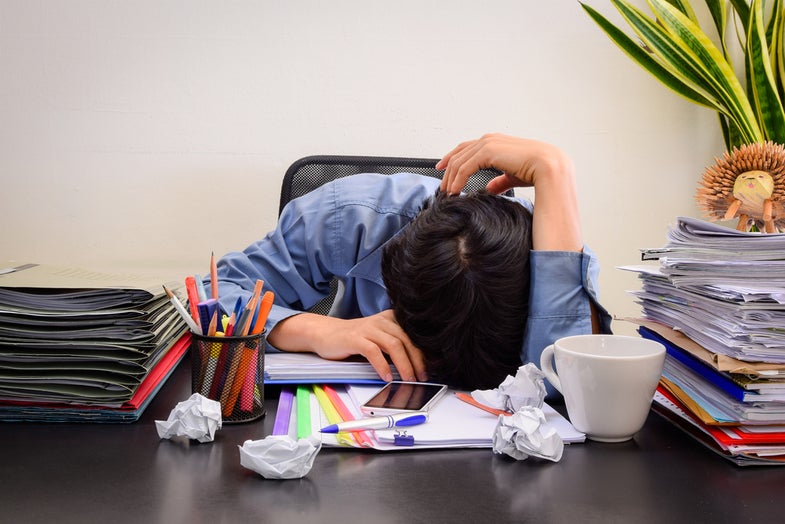 It’s not all fun and video games. In advance of Red Dead Redemption 2, set to debut later this month, members of the team told Vulture they were logging 100 hour weeks to deliver the long-awaited game to fans on deadline. Originally framed as a boast, the familiar claim soon generated backlash, and brought to the surface a question usually carefully repressed: How much work can kill you?

Americans love to labor. While full-time employment is characterized as a 40 hour work week, the average employee actually spends 47 hours at work each week, compared to 35 in Germany or Sweden. The United States is also rare among wealthy nations in that it does not guarantee paid vacation. And those working for companies that do offer paid vacation don’t even take it; 54 percent of worker bees squander half of their vacation days each year.

This approach to work is reinforced in popular culture. Ads for Fiverr, which bills itself as an “online marketplace for freelance services,” celebrate people whose “drug of choice” is “sleep deprivation”. Many executives perpetuate the myth that they need only 4 hours of sleep to function at the highest levels. And Lyft’s PR team was “excited” to turn the story of a woman who continued driving passengers while in the depths of labor into a shining example of the success of the gig economy.

This culture and economic structure has serious consequences—physical ones. In his recent book Dying for a Paycheck, Stanford University organizational behavior professor Jeffrey Pfeffer argues that some 150,000 deaths in the United States each year, and as many as 1 million in China, can be attributed to overwork. Sedentary lifestyles, sleeplessness, and stress—all provoked by damaging work cultures and economic anxieties—are partly to blame.

Historically, jobs killed with a bang or a flash. Before World War II, most Americans worked outdoors or in factories, where they sparred with felled trees or building-sized printing machines. The Occupational Safety and Health Administration, or OSHA, was formed to regulate exactly these physically dangers, and they’ve done a great job. Workplace injuries, at least when defined in these terms, have fallen dramatically.

But our bodies are now wrecked in slower and more secretive ways. We’ve long known, for example, that the blue light in our computer screens can cause eye damage, but it’s only recently that researchers have shown the process by which the wavelength stimulates toxic chemical reactions on the surface of our eyeballs—reactions that could lead to diseases like macular degeneration.

We’re also aware that sitting down for hours on end causes muscle strains and repetitive stress injuries. But it’s increasingly clear sedentary lifestyles really can kill. In 2017, researchers found that the average worker was inactive 12.3 hours a day. Worse still, the Guardian reported, the researchers found that those “who were sedentary for more than 13 hours a day were twice as likely to die prematurely as those who were inactive for 11.5 hours.”

Like a falling log or a hungry conveyor belt, the consequences of sleeplessness are obvious—especially when that deprivation is severe. Japan has become famous in English language news for a phenomenon called “karoshi,” the sudden deaths of ostensibly healthy people from periods of intense, unbroken work. The concept stretches back to the 1980s, but recent cases include a 31-year-old woman who died after working 159 hours of overtime in one month.

Of course, “karoshi” is not limited to Japan’s borders; wherever people are overworking, it looms. In London in 2013, for example, an intern at Bank of America died after reportedly working for 72 hours straight. The Red Dead Redemption II crew appears to be in good health, but their purported workflow certainly puts them in karoshi territory. (History suggests their players will also be at a similar risk, as elite gamers have died from playing days or even weeks straight.)

Just as with physical injuries, work can cause subtler damage to our sleep schedules, the repercussions adding up slowly, like sand in an hourglass. Studies show that lack of sleep or poor sleep quality can cause anxiety, a lack of control over emotions, physical pain, and impulsive behavior, which can lead to eating or drinking too much. In an August 2018 interview with The New York Times, Tesla executive Elon Musk appeared to embody this phenomenon, talking about his dependence on Ambien to help sleep and reportedly cried in an interview while discussing the car production challenges his company has faced.

Disrupted Circadian rhythms only exacerbate the sense of dread that office politics, deadlines, and high-stakes projects can evoke. In the body, fear and stress start off similarly, prompting the body to release cortisol, a hormone that increases your heart rate and blood pressure, preparing you for a fight or flight response. But fear is acute—it passes, at least in theory, when the threat is gone, allowing cortisol levels to return to baseline. Stress, on the other hand, is prolonged. When cortisol is pumping through over veins for extended periods of time, it can wreak havoc on our organs.

It’s the heart that seems especially vulnerable to the demands of the workplace. In 2010, a study in the European Heart Journal showed that British employees who worked 10 or more hours a day were more likely to have heart problems than their peers who worked 7 hours a day. Even when controlling for behaviors like smoking, anxiety, and even sleep loss, this held true, with more heart attacks and death from heart disease among the overworked group. Other researchers have found similar physical effects of stress. In 2016, for example, scientists reported that “those in high-stress jobs with little control over their workflow die younger or are less healthy than those who have more flexibility and discretion in their jobs.”

Work provides the means to live, but it’s increasingly clear that the modern workplace can kill, too. Knowing the danger that comes with our desk chair means we can do our best to mitigate the effects of sedentary, sleepless life styles—whether we’re working 100 hours a week making a video game, or spending 100 hours a week playing one.

So if you don’t want to be red dead yourself, stand up, stretch, and send your boss this story when you leave work a little early today.