What does that mean for you? 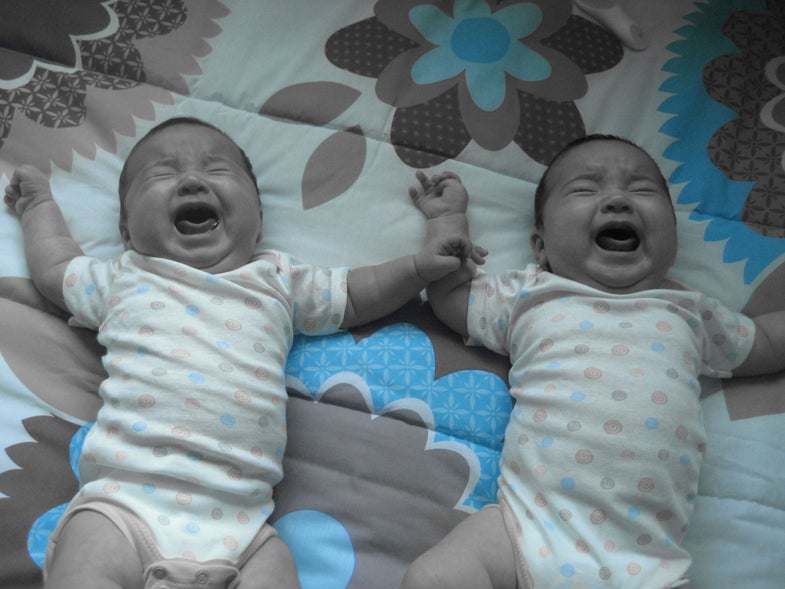 An observational study published today showed that in sets of Swedish identical twins, the twin with the higher body mass index (BMI) was no more likely to have a heart attack or to die younger than the slimmer twin.

There’s a major paradox in the world of obesity research. You probably thought that being fatter increased your chance of having a heart attack. Well, since the 1980s, the percentage of obese people has increased, but heart attack rates have actually been decreasing. What gives?

The team of researchers from Umeå University in Sweden reviewed health information from 4,046 pairs of identical twins, where one twin’s BMIt , a metric used to determine whether you weigh enough for your height, was at least .01 bigger than the other. It turns out that overall, the slimmer of the twins had more heart attacks and deaths no matter how the team looked at the data. This goes against mainstream public thinking, and lots of medical sites list heart attacks among obesity risks. However, the heavier twin’s odds of having diabetes were still around 1.5 times higher.

“We got the results three years ago but I didn’t beleive in them,” the study’s first author, Peter Nordström, told Popular Science. “So we reanalyzed all the data” and waited for more from follow-ups with the group of twins, “and the results were the same so we thought it was safe to publish.” The team released their results today in JAMA Internal Medicine.

Identical twins make good study participants because their genetic data is mostly the same, which means studying them can help determine whether a disease is genetic or caused by other factors. The results of this study therefore strengthen support for the fact that diabetes is linked to obesity, and for the idea that heart attacks are instead linked to genetic factors.

So, what does this mean for you? Right now, nothing. The study naturally has limitations, which Nordström points out; weight and height were all self-reported, there was little information on diet or other potentially related diseases like hypertension, and the data doesn’t take into account reasons that the heavier twins may have weighed more. Plus, this is just one study, and 4,000 subjects is relatively few for studying something as prevalent and complex as obesity. However, the researchers suggest that people interested in losing weight should do so to target reducing their risk of diabetes, rather than reducing the risk of heart attacks and death.

Nordström hopes that more data will confirm or reject his results. “I would like to match our data with other twin databases,” he said. “I would be happy if other researchers with similar cohorts would do the same analysis to see whether they can confirm our results – that’s important.”