This healthy baby came out of a dead person’s uterus

It could open up uterine transplants to a lot more people. 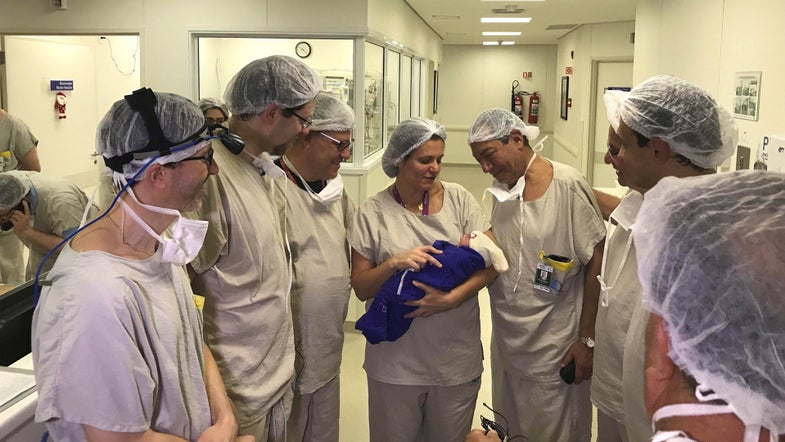 In a world first, a woman with a transplanted uterus from a deceased donor has given birth to a healthy baby girl. That may sound like something of a technicality—babies have been born before using uteruses from living donors—but it’s actually much more important than that.

Uterine transplants are fairly new, and until now, you didn’t just need a surgeon willing and able to do the procedure—you generally had to know someone who was willing to give up their uterus. A family member or a friend, provided they were a good match in terms of blood type, would undergo a voluntary hysterectomy in one operating room, and surgeons would literally carry the organ into the next room to transplant it into a recipient. Since 2014, when a group in Sweden reported the first birth from a live transplant, 11 more patients have also given birth. The ability to source organs from deceased donors would increase availability and lower the net risk of such a procedure, but no one was really sure how long a uterus could go disconnected from a blood supply before it would be unviable. There have been at least three operations to implant a deceased donor’s uterus in lieu of a living donation, all of which have either failed due to infection or simply failed to produce any live births.

This latest case study, published in the journal The Lancet, proves that such a procedure is indeed possible. It opens up many more opportunities for individuals without uteruses (or with uteruses that are incapable of carrying a child to term) to get one and become pregnant. Around 1.5 million women worldwide don’t have a uterus, which can be the case for a variety of reasons. Some are born without one because of a congenital condition (the woman in this case study has Mayer-Rokitansky-Küster-Hauser syndrome). Others require hysterectomies due to disease or have organs damaged by infection or trauma. The procedure also offers hope to transgender and non-binary individuals born without uteruses who wish to carry their own pregnancies, though it has not publically been conducted on any such patients as of yet.

Until now, potential recipients had to ask a loved one to undergo a four-to-six-hour surgery—plus weeks of recovery time—to give up one of their organs forever. And it would generally be so that the recipient could become pregnant, use the uterus, and then get rid of it. Uterus transplants aren’t considered permanent: they’re removed after the patient gives birth, sometimes right after the c-section, to limit the unnecessary risk of a life-threatening immune response. That’s a lot to ask of a donor when adoption and surrogacy are alternatives for most uterine transplant candidates.

Now, there are many more possibilities, though still many limitations. Deceased organ donors must have uteruses entirely free of HPV or any uterine diseases and they must have borne a child before—imagine if doctors transplanted a uterus only to find that it was unable to carry a pregnancy anyway.

This uterus in particular went eight hours without a blood supply between the time the donor passed away from a brain hemorrhage and the time the organ got to the patient. That proves there is a window of leniency in which doctors can try to match a recently deceased donor to a potential patient. The surgery took place on a then 32-year-old woman in São Paolo, Brazil back in September 2016. Since she still had intact ovaries, she was able to undergo fertility treatments in order to harvest her eggs, which were later transferred back into her once she had recovered from the transplant operation. She gave birth nearly a year ago, on December 15, 2017. At the time of writing the paper, the surgeons reported the baby was a healthy seven-month-old with an equally healthy mother.