So, what’s the deal with homeopathy? 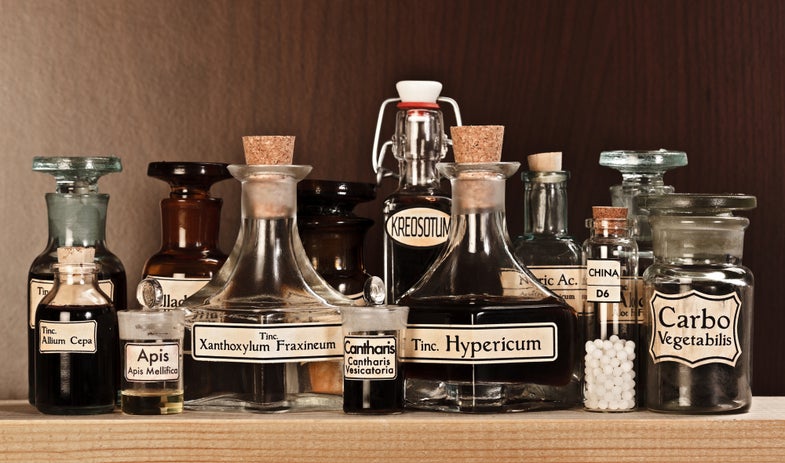 Homeopathy traces its roots all the way back to ancient Greek medicine. In 400 BCE Hippocrates prescribed a small amount of mandrake root as a cure for mania, based in the theory that “like cures like”—if a lot of mandrake can cause mania, the thinking went, then maybe a little bit can cure it? This became known as the Doctrine of Signatures and served as the foundation for an entirely new medical tradition. But how did an ancient practice see a modern revival? Enter Christian Friedrich Samuel Hahnemann.

Born in 1755 in Meissen, near Dresden, Hahnemann was—in the parlance of the time—super-duper-smart. His father, disdainful of formal education, took him out of school for “thinking lessons,” where he would instruct the boy to simply sit there and . . . uh . . . think. Despite this unusual practice (or maybe because of it, who knows?), Hahnemann quickly mastered pharmacy, botany, physics, and at least ten languages. After working as a translator, he studied medicine at Leipzig and Vienna, and at last graduated from the University of Erlangen.

Late-1700s medicine was a strange and wild place. There we no shortage of theories and research, and no shortage of bizarre experiments and treatments. It was the age of Heroic Medicine, when treatments were prescribed in order to balance out the body’s humors, with plenty of sweating, bloodletting, and vomiting—and what with that being the easiest way of balancing the humours, this probably meant a lot of vomiting.

As a relatively new arrival to medicine, Hahnemann took a look at all this and thought, “Y’know, I think we’re doing more harm than good here.” He advocated clean living, a proper diet, fresh air, and exercise as the basis of good health, which, actually, we are pretty on board with. Ultimately, though, he became frustrated with the unscientific treatments of other doctors, and took up translation again. While translating William Collins’ Materia Medica, he came across a passage describing cinchona tree bark as a cure for malaria and, out of curiosity, tested it on himself. Although the bark contained the anti-malarial quinine which was, indeed, a treatment for malaria, Hahnemann actually developed symptoms of the disease after taking it.

Not knowing that this was the result of cinchonism (a quinine overdose) he erroneously followed the same logic as the ancient Greeks, and tested small amounts of poisonous herbs and animal venom on himself, his friends, and even his eleven children. (Hey, it sounds like he had some to spare, huh? We kid!)

Yet, when those substances were given in small amounts to already ill folks, those people got even sicker. Surprise! So, he quit! No, No, he went further: Hahnemann figured that even smaller amounts were needed—1 drop of an herbal extract in 99 drops of water or alcohol, then a drop of that diluted to one-hundredth, and again, and again. Realistically, no measurable or effective amount of the substance remained, except for a “footprint” or “echo,” and this diluted mixture—essentially water or alcohol—was given to a patient. Hahnemann named his idea using the Greek words hómoios, “like,” and pathos, “suffering,” calling the practice “Homeopathy.”

Hahnemann, who considered plenty of other doctors to be unsafe and eccentric, was himself seen as a quack and controversial by many. Regardless, he received the patronage and protection of the archduke of Saxony, so what did he care? He remarried eventually, and moved to Paris, before he died at the age of 90.

In the 1820s, a Doctor Constantine Hering was investigating Hahnemann’s theories with a goal of scientifically refuting them. While dissecting a cadaver, Hering badly cut his finger, and the ensuing gangrene lead many other physicians to advise amputation. Less than thrilled with this plan and feeling desperate, Hering decided to give homeopathy a shot and applied a concoction which contained some small dilution of white arsenic. Much to his surprise, the wound healed and he got to keep his digit. Spurred on by this recovery, Doctor Hering became a convert, and helped found the Homeopathic Medical College of Pennsylvania in 1848 (now part of Drexel University).

By 1900, there were 111 homeopathic hospitals and 22 medical schools focused on the practice of homeopathy, but the discipline’s fall was as sudden as its rise. With improved understanding of the science of medicine, homeopathy quickly fell out of fashion and by 1923 only two schools in the US were still teaching it.

There is zero evidence to support the use of homeopathy. Homeopathy can be dangerous, in that it keeps people from seeking out actual medicine, and it’s also a rip-off. The fact that homeopathic cures are sold alongside actual medicine is one of the dumbest things that happens on Earth, and we’re writing this in 2018, so let’s just say it’s a heated competition.

The preceding work has been excerpted from The SAWBONES Book: the Horrifying, Hilarious Road to Modern Medicine by Justin McElroy and Dr. Sydnee McElroy. It is published by Weldon Owen.