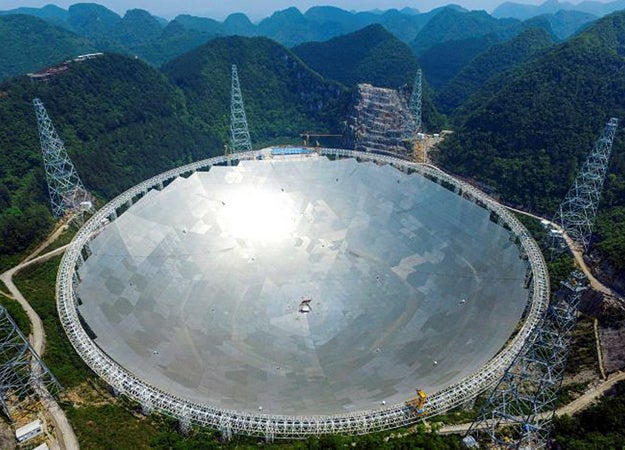 Scientists searching for extraterrestrial life have added a big ear to their arsenal. This week, the National Astronomical Observatories of China (NAOC) announced they’ll be joining Breakthrough Listen Initiative, a $100 million search for alien life funded by the Russian billionaire Yuri Milner.

The Five-hundred-meter Aperture Spherical Telescope (FAST) in southwest China still has that ‘new telescope’ smell, having completed construction in July. It was meant to be an alien eavesdropper from the start, with its directors claiming the “potential to discover an alien civilization will be five to 10 times that of current equipment.” FAST joins Breakthrough’s roster of research telescopes and devices, including the Green Bank Telescope in West Virginia, the Parkes Observatory in New South Wales, Australia, and the Automated Planet Finder at Lick Observatory in California.

FAST is not only a powerful telescope in its own right — its giant 1,640 ft (500 m) dish can detect very weak radio signals and conduct sensitive surveys of the galactic plane and perhaps the whole sky — but will serve as a follow-up facility for weak detections at other sites, according to Andrew Siemion, who is involved with Breakthrough Listen and director of Berkeley’s SETI Research Center.

Private partnerships like this could have an advantage over ones with more government oversight. The U.S. and China historically don’t play well together when it comes to space programs, eying one another as a security threat and locked in a race to become the world’s space leader. But the entire scientific community benefits, Siemion says, when collaborations happen on this scale and across countries.

“In the past, there have been various restrictions imposed on publicly funded scientific collaboration between certain nations, which is unfortunate,” he told Popular Science via email. “I hope that this collaboration demonstrates that profound scientific questions can transcend national boundaries and offer an opportunity for our entire planet to come together to seek answers.”

With three of the world’s biggest radio telescopes dialed in to billions of radio frequencies, Earth is listening more closely than ever.