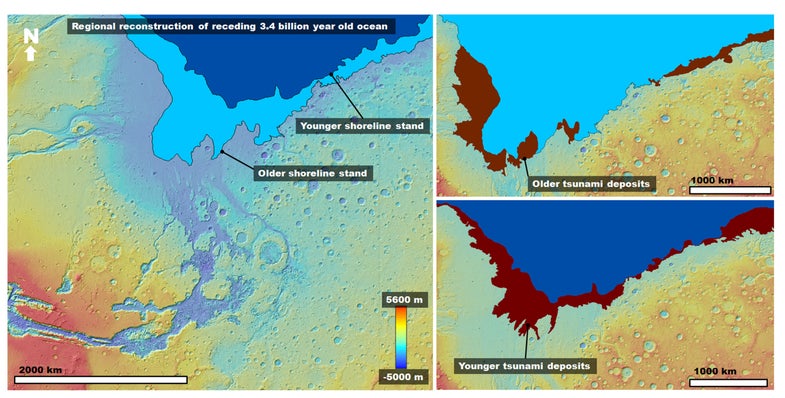 Over three billion years ago, Mars had water. A lot more water than it has now.

In addition to a massive wave of water, tsunamis carry along huge amounts of debris, some of which can be swept inland and left far beyond the shorelines. In this case, the waves created by the impacts were likely almost 400 feet high, and travelled hundreds of miles inland, carrying debris and scarring the landscape.

The two tsunamis on Mars likely occurred about 3 million years apart, enough time for the Martian climate to cool considerably. During the icy conditions of the second tsunami, large chunks of ice were likely pushed along, carried away from the ocean and left on the dry, cold surface. Researchers hope that eventually, those deposits could be examined for signs of whether the waters of Mars once had life.

“In spite of the extremely cold and dry global climatic conditions, the early Martian ocean likely had a briny composition that allowed it to remain in liquid form for as long as several tens of millions of years,” co-author Alberto Fairén said. “Subfreezing briny aqueous environments are known to be habitable environments on Earth, and consequently, some of the tsunami deposits might be prime astrobiological targets.”