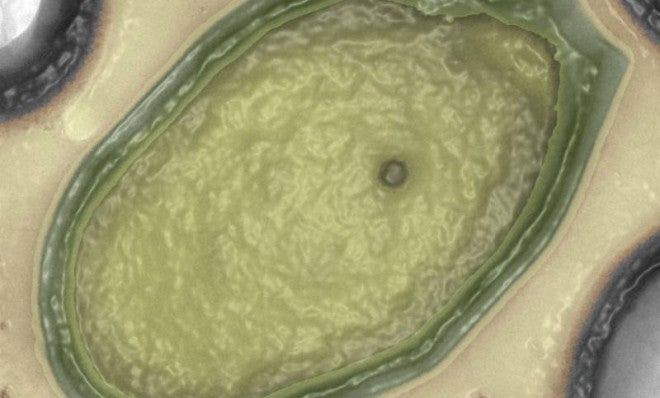 The viruses that we’re most familiar with, like the influenza virus, are small and simple. Influenza is about 100 nanometers across, and has only 13 genes. But scientists are beginning to realize that there’s no reason a virus needs to be that small or that simple–and in fact, there are “megaviruses” that can be much, much bigger and more complex than any virus you’ve seen before.

In a study published today in Science, researchers describe a newly-discovered megavirus that’s the largest of its type ever seen. By volume, according to Carl Zimmer at the New York Times, it’s 200 times larger than the flu, and has a whopping 2,556 genes. Even crazier, only 6 percent of those genes are familiar to us. The rest are completely new.

The researchers have decided to give the virus the genus name “pandoravirus,” referring to the likelihood that the discovery will lead to all kinds of new knowledge about viruses. The first pandoravirus found, pictured above, turned up in a routine dig off the coast of Chile, and puzzled the researchers until they realized that it contained no bacterial DNA at all, and must in fact be a giant virus. But it’s not one of a kind; shortly after, in an Australian pond, they found another. The researchers believe this indicates that pandoraviruses aren’t rare at all, though much is still unknown about them (like, for example, why they’re so much bigger than other viruses).

They might be huge, but the pandoraviruses discovered so far live only underwater and don’t seem dangerous to humans. “This is not going to cause any kind of widespread and acute illness or epidemic or anything,” said Eugene Koonin of the National Institutes of Health to NPR. So we won’t be adding it to this list anytime soon. Hopefully.