Watch: How Self Driving Cars Could End Traffic Jams 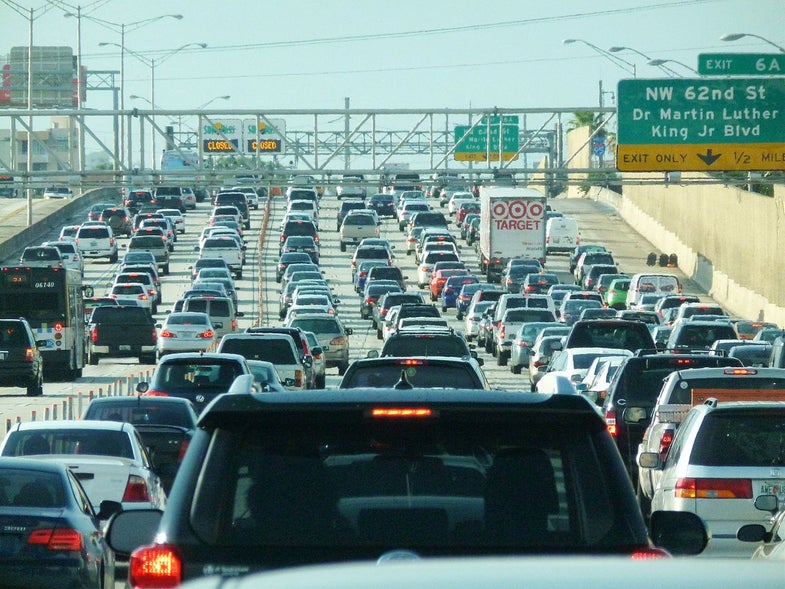 Interstates 95 is never not terrible. B137 via Wikimedia Commons CC BY-SA 4.0
SHARE

Driving is deadly. The National Highway Traffic Safety Administration estimated that 32,500 people died on America’s roads in 2015. Part of what makes driving deadly is that it’s deadly dull: cautiously waiting to go, maintaining enough distance both behind and in front of other cars, and only crossing an intersection when there’s definitely enough room for the car on the other side, are responsible ways to drive–though depending on the practices of a given area, sometimes also impossible or seen as rude. It can be an exhausting chore at even the best of times, and in rush hour, it’s just a maddening, draining slog. So it’s nice to contemplate, if only for a moment, what ideal driving could look like.

In a short video from podcaster and youtuber CGP Gray, released earlier today and spotted on Jalopnik, Gray explains traffic jams as a problem of imperfect information: the light turns green, and then drivers in sequence accelerate, rather than all moving together, at the same time. This is something humans do out of caution and prudence; without direct acceleration information fed to our cars from other cars, we have to rely on observed movement and distances to try and get it right. That’s inefficient, from a travel perspective, and while it’s the best we can do now, it doesn’t have to be the best humans can do, ever.

CGP Gray puts his faith in self-driving cars, and specifically in coordination between those cars. If the cars talk to each other, then they can all accelerate at the same time, while maintaining safe distances, making travel smoother. It’s a glorious vision, at least, and one that responds to the nature of traffic itself. We don’t know yet what new challenges self-driving cars will bring to roads, but at the very least, it’s nice to imagine a future where they work perfectly.