China Will Test A ‘Straddle Bus’ That Drives Over Cars 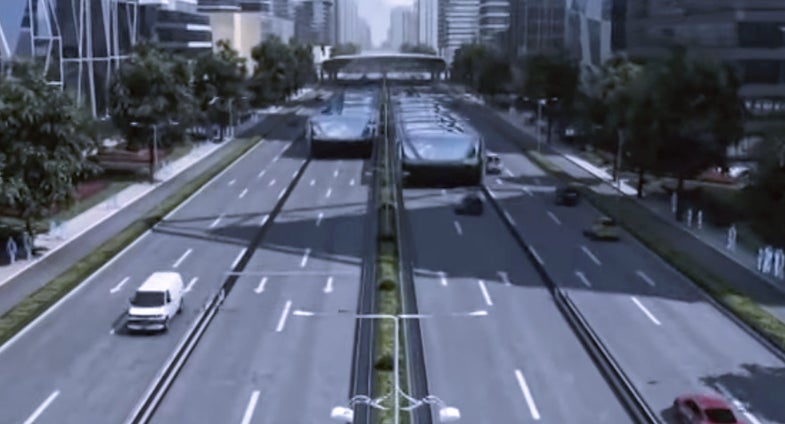 Designs in China for a straddling bus show a rail-based vehicle that goes over street traffic. Youtube
SHARE

If you’ve ever imagined yourself driving a monster truck over rush hour traffic, there might be a real job for you some day as a straddle bus driver.

Population-burdened transit systems in China may have a new and cheap solution in the form of a bus that glides two meters above the street up to 37 miles per hour (60 kilometers), on a set of rails. Think of a trolley car shaped like an arch. A prototype of this so-called straddle bus or “land-air bus” is being built by the company Transit Explore Bus, and is set to begin testing in Chengzhou at the end of July or August, according to New China TV.

The idea is to build on top of existing traffic patterns rather than having to dig costly subway systems. Because it relies on more existing infrastructure than a subway, this design is expected to cost just 60 percent of what subways would, and save on the carbon emissions that would result from an equivalent number of cars or regular buses.

The basic idea dates back to the 1960s, but hasn’t been pursued as a viable transportation option until now.

Hopefully Chinese drivers don’t have claustrophobia, or whatever the word is for the fear of a massive moving vehicle zooming overhead while you’re stuck in traffic.