Inside a self-driving car's lane-change calculus. 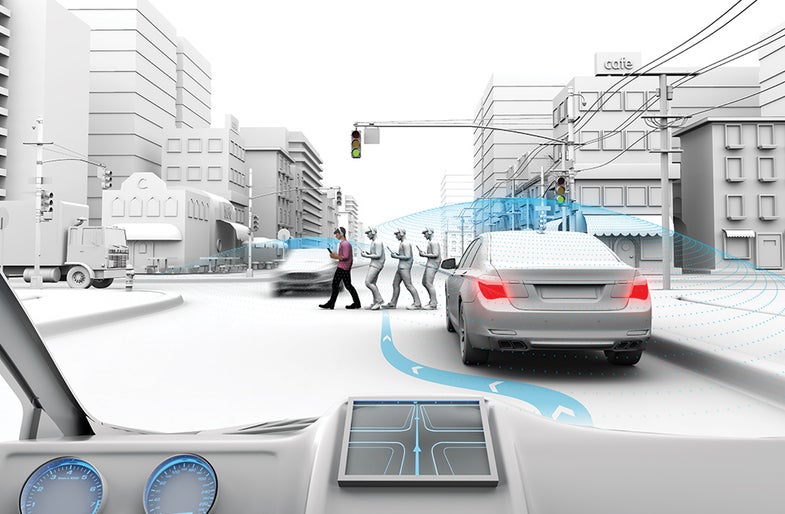 Changing lanes is simple for human drivers. Not so for autonomous cars. Instead of gray matter and muscle memory, self-driving vehicles make decisions using programming, artificial intelligence, and onboard perception systems such as lasers, cameras, and radar.

We asked four companies—drive.ai, a startup out of Stanford; nuTonomy, born from MIT; Uber; and Waymo—what their cars consider when deciding whether to veer left.

Signals dotted through the environment offer the car’s robot brain important clues. Using an AI strategy called deep learning, a drive.ai vehicle can figure out that a car stopped at a green light might be stalled, while one that doesn’t proceed during a red light is just going with the flow. Algorithms can also conclude that flashing hazard lights on a vehicle ahead mean that it probably isn’t going anywhere anytime soon.

Cars and delivery trucks standing at the curb frequently protrude into traffic in crowded urban environments. For self-driving cars, a stopped vehicle that’s only partially in the lane is a clue it might be there a while. Intelligent cars from nuTonomy and drive.ai factor this in when deciding whether to pass. If the vehicle ahead is closer to the curb than to the road’s center, the robot car might opt to go around.

NuTonomy, whose self-driving cars have cruised Singapore and Boston, taps into city-specific knowledge. For example, a truck stopped in a place nuTonomy knows deliveries are likely might tilt their car’s decision in favor of passing. When in doubt, the cars consider a stationary vehicle to be paused only momentarily and will wait behind it. That conservative approach is typical in the industry.

An autonomous car can slam the brakes if someone carelessly steps into traffic. And Waymo cars give bicyclists a wide berth by default. Onboard cameras scan the streetscape around the vehicle, while its spinning laser—a tool called lidar—measures the distance between the car and other objects. Radar readings help it calculate the speed of other nearby vehicles.

Navigation—to make a left turn, for example—is one of the best reasons for a self-driving vehicle to risk changing lanes. Uber’s Advanced Technologies Group programs a car to check that there’s sufficient distance between it and other autos before the maneuver. Essentially, its computer performs a version of a driver’s ed following-­distance guideline called the “two-second rule.” The calculations also consider the riders’ comfort: Cars won’t gun it and scare them. (Editor’s note: After publication of this article in print, Uber suspended its self-driving car road operations following an accident in which one of its vehicles killed a pedestrian.)

A tall vehicle can block the view for humans and robot roadsters alike, so an autonomous car squarely behind a semi might stay put unless a human intervenes. However, if the stalled vehicle is pulled over, or has blinkers on, the self-driver will likely try to pass. Eventually, engineers anticipate that vehicles will be able to communicate with one other; that way, a stopped truck could share its status (seen in the image above as blue waveforms) with nearby cars.