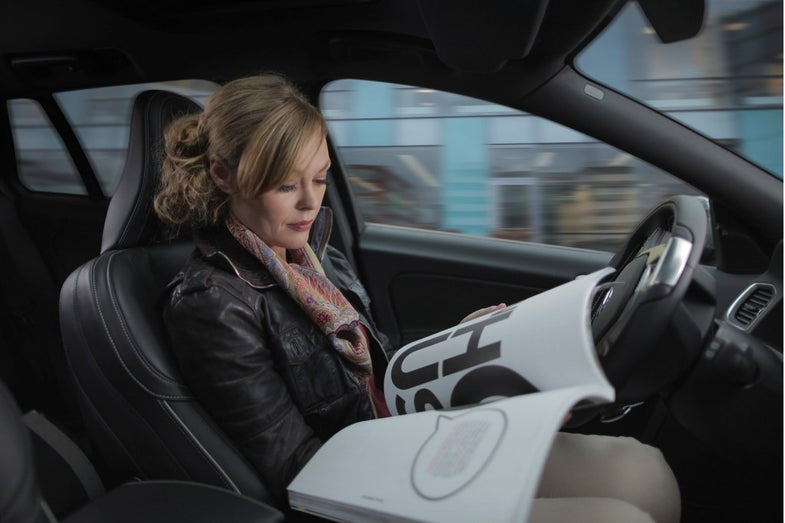 Long before we have fully autonomous cars – ones in which we can kick back and catch up on Westworld as our faithful robot delivers us safely to work – we’ll live in a world of shared responsibility. Tesla Autopilot and other upcoming advanced semi-autonomous systems require the driver to stay alert, should a situation arise in which humans need to step in and take the wheel.

This handoff is something human-machine interaction designers have spent a lot of time puzzling over. Today, research published in the inaugural issue of the journal Science Robotics highlights a new bump in the road: Human drivers may not be capable of smoothly taking control of their self-driving vehicles.

The research, co-authored by a multidisciplinary group at Stanford University, studied 22 drivers on a 15-second course containing a straightaway and a lane change. The car navigated itself to the start of the course, then handed control over to the driver, who negotiated the straightaway before being cued to make the lane change.

The idea was to test how well a human driver could adjust to changes in speed that may have occurred when the robot was in control. The test vehicle, of Stanford’s design, allowed researchers to tweak the car’s steering responsiveness, a tactic that mimics a key change that may occur when an autonomous vehicle controls itself.

When the driver’s hands were off the wheel, the researchers altered the car’s steering performance to mimic higher-speed maneuvering. The faster a car is moving, the more sensitive steering becomes; i.e. you need to turn the wheel less to make a lane change on the highway than you do when maneuvering into an adjacent lane in bumper-to-bumper traffic.

When steering was made more sensitive, drivers did not handle things very well. “They were making many more steering oscillations,” explains co-author Lene Harbott. “They tended to overshoot the first big maneuver, and had to correct for that in order to make the lane change.”

Co-author and neuroscientist IIana Nisky (now of Ben Gurion University of the Negev, Israel) says this disconnect is an example of implicit versus explicit learning; awareness alone cannot compensate for what our bodies can figure out implicitly through experience. Over time, drivers were able to acclimate to the new, more sensitive steering conditions, but doing so made returning to the prior “baseline” conditions difficult. “You’ve changed the internal representation of how the car is going to respond,” Nisky says.

In this study, the adjustment window was not long enough for drivers to veer off-course. But the results do indicate a need for further research into how human drivers will handle handoffs in a broader range of conditions.

In fact, these results could spur inquiries across a wide array of autonomous driving disciplines. Researchers could assess how a driver’s activity inside the car (e.g. if she’s talking to a passenger or paying attention to the road) impact how well she negotiates a handover. Neuroscientists might want to map the precise brain activity happening during handoff moments. And human-machine interaction specialists may take the findings into account when designing the systems that signal drivers to take control of a vehicle.

“The study is really about how human drivers respond to changes in vehicle control,” Harbott says. “Experts in car safety could use our study as one piece of information going forward.”

Updated 12/7: A prior version of this story mis-stated when the handoff between robot and human driver occurred.