Robots Are Terrible At Driving Cars

A Final Lesson From The DARPA Robotics Challenge Finals 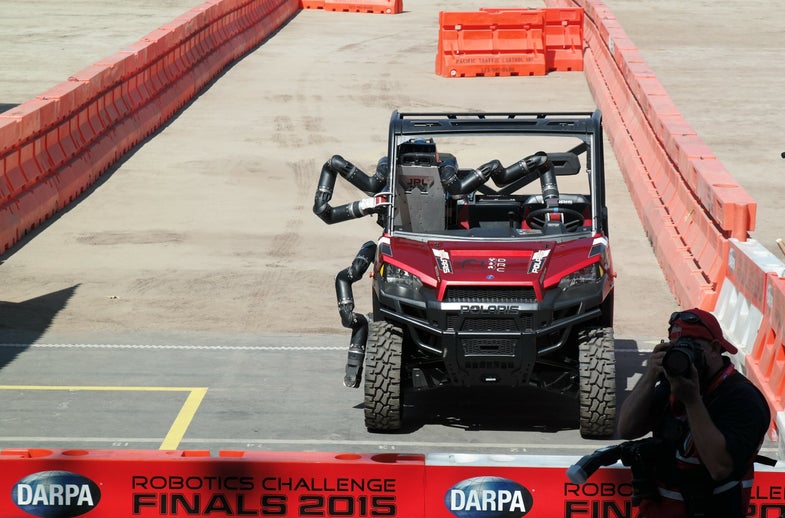 From the very beginning of the DARPA Robotics Challenge (DRC) Finals, it was obvious that driving was going to be a problem for the robot contestants. The very first robots to take the field this past Friday at the Fairplex in Pomona, California showed up without their modified Polaris utility vehicles. These machines were hoofing it, using their own legs to gradually make their way down a dirt strip meant to simulate part of a disaster zone too perilous for humans. It turned out to be pretty perilous for robots, too. By not even getting into the cars, these teams were already conceding defeat in the two-day Pentagon-funded competition.

In a contest whose winners were determined by a combination speed and points, they were giving up a full quarter of the total available points, and spending long minutes struggling down a stretch of track that might have taken a couple of minutes to drive across. Worse still, most of the robots in that first batch wound up tipping over, giving the internet its first taste of the falling-robot blooper reels to come. These teams lost the finals as soon as they had kicked off, and kept sending the machines they’d worked with for years back onto the course, to hit the dirt, again and again.

That’s how bad most robots are at driving cars. The majority of the DRC teams that were brave enough to put their machines in vehicles had to employ genuinely zany contraptions to make the Polarises robot-ready. The Atlas robot, for example, is a six-foot-tall humanoid, with two arms and two legs. DARPA provided Atlases to multiple teams, and among the two dozen teams that made it to the finals, six were using their own lightly-modified versions of the same robot. And yet, Atlas couldn’t sit in the driver’s seat like the rest of us humanoids. It’s lack of flexibility, and its bulky upper body, which incorporates a huge, backpack-like battery, forced it to sit side-saddle in the passenger seat, with its legs draped over the outside of the vehicle.

That was just the beginning of Atlas’s driving indignities. Reach the accelerator was a challenge, even with the robot’s long, ape-ish arms. So Team TRACLabs fitted its Atlas with the upper limb equivalent of a peg leg, a wooden stump with a rod that could poke the pedal. Actually, it didn’t poke the pedal itself, but the wooden blocks that the team positioned in front of the accelerator. And to steer the Polaris, TRACLabs built an even more arcane setup, connected the steering wheel to a piece of wood that was bolted to the vehicle’s roll cage, for reasons that were no doubt ingenious, but beyond my comprehension. Another Atlas team somehow drove its vehicle by gripping a dog toy attached to cables.

Among other things, the robots at the DRC were facing a manipulation challenge. Perception was also an issue, but only to a point, since the vehicles had a 10 mph speed limit, and the driving section of the course was a simple strip of dirt with three Jersey barriers to navigate around. Any machine with a laser rangefinder—a standard-issue sensor for many robots, including driverless cars—can perceive that environment. Getting out of the Polaris was a huge risk, and many robots took disastrous spills while doing just that. But it was the ability to physically operate the vehicle’s controls that required MacGyver-ing from most of the teams, including Carnegie Mellon University’s CHIMP. Despite having vaguely human-like three-fingered manipulators capable of gripping a door handle or a power tool (which were two of the eight total tasks in the competition), it was easier for the robot to steer with something that wasn’t built for manipulation at all. CHIMP turned the Polaris by pressing rubber track in its arm against the steering wheel, and running it forwards or backwards. Normally that track is used in concert with the robot’s three other tracks, when drives around on all fours. But in the vehicle, it became a makeshift gripper, while CHIMP’s two actual grippers went unused. CMU’s robot also had a special lever to reach the pedals, which would detach from its leg after use.

Smart as these workarounds are, they’re also a sign of the surprisingly slow progress of robotic manipulation. When details of the DRC were announced in 2012, driving seemed like an odd, but integral part of the competition. Battery power for large robots is scarce—more battery cells equals more weight, which is always problematic–and machines that respond to disasters shouldn’t be burning their limited energy supply by walking, crawling or rolling for long stretches en route their destination. DARPA’s proposed solution is simple: commandeer a vehicle. Human response teams at the edge of the disaster zone could help the bot into a vehicle, and send it into the fray. Once the robot couldn’t drive any further, due to debris, or the need to go indoors, it would extricate itself and carry on using its built-in mobility. And by making driving and egress (getting out of the vehicle) two separate tasks, representing two out of a total of eight possible points that teams can score during the DRC Finals, DARPA further emphasized the competition’s goal of developing robots that can function in environments that weren’t specifically made for them. And since power tools were another part of the competition, you didn’t have to be a roboticist to envision a bunch of machines with dextrous, human-like hands, similar to the five-fingered manipulators on NASA’s Robonaut.

But the only robot at the DRC Finals with five-fingered hands was Team NEDO-Hydra’s, which didn’t compete because it wasn’t finished. Rather than pushing teams to advance that state of the art in manipulation, DARPA kept lowering the bar, downgrading from Sawzalls to drills, a tool that no one would actually use to cut a large hole in a wall, and allowing more and more modifications to vehicles. As a result, the majority of the robots wound up with limited lower-body flexibility, and most had three fingers and very little articulation to work with. They were using claws, basically. This led to the universally inhuman, and inefficient gripping of power tools. In order to cut a hole in a wall, many robots had to hold their drill sideways, using the equivalent of their thumb to press the trigger. NASA’s RoboSimian had no fingers at all, but rather two pairs of comma-shaped hooks at the end of its limbs. The hooks only rotate forward when needed.

According to Brett Kennedy, RoboSimian team leader and head of robotics research at Jet Propulsion Laboratory, this design is intentionally simple, to avoid breakdowns while a rover is exploring an asteroid, comet or other remote location, where repairs are impossible. It might have been a little simple for the DRC, though. In the second and final day of competition, RoboSimian had difficulty removing a plug from one socket, and pressing it into another. The plug eventually fell out of the robot’s gripper, and the team abandoned the task.

Then again, RoboSimian was the least fussy driver in the DRC, despite its bizarre grippers. Each of the robot’s four identical limbs has seven joints, giving it an incredible amount of flexibility. While other bots had to deal with the fact that their arms were more rigid than a human’s, and had far less range of motion, RoboSimian folded one limb into position, grabbed the center of the steering wheel, and rotated. It could also snake a hind limbs down to reach the pedals on its own, and the 275-pound, 4.5-foot-tall robot was small enough to fit in the Polaris without removing the roll bars. “It’s the only robot in the finals that can drive a stock vehicle,” says Kennedy.

There were other good drivers at the competition, including Metal Rebel, the Hubo humanoid run by the University of Nevada at Las Vegas. Team leader Paul Oh knew that his bot was an underdog, but he wanted to showcase its driving skills. “When people see a robot driving a vehicle, they are bewildered,” says Oh. “It inspires wonder, which is what our lab is modeled on.” Despite being essentially unfunded (some teams received millions from DARPA over the past three years), UNLV’s bot made it into the DRC’s top 10 scores, and finished the driving challenge in less than a minute. Based on practice runs that Oh conducted with his students, that’s how long many humans would have taken. In fact, he’s committed to the long-term goal of creating robots that can take command of a non-robotic vehicle. “If you can drive a utility vehicle, why can’t you drive a forklift or a tractor? Or maybe a boat, if the captain or pilot is incapacitated,” says Oh. “You could use a robot to take over the stick, and get that ship or spaceship or aircraft to safety.”

Oh’s vision isn’t exactly common within the robotics community, or well supported by the DRC’s overall results. The winner of the competition, Team KAIST, also used a Hubo humanoid robot, and also had to modify their vehicle. Second place IHMC Robotics used an Atlas, with its own oddball assortment of driving aids. And CMU’s CHIMP, which was in first place heading into the final day of competition, started its final, disastrous run yesterday by colliding with a barricade. DARPA officials overreacted, and shut off the bot’s Polaris, as well as the bot (there was no need to power down CHIMP, once the vehicle was off). CHIMP eventually made its way to other tasks, but ultimately came in third, based on its performance on the previous day. So all of the DRC’s winners required some amount of jerry-rigging to drive a short distance. And one actually crashed.

RoboSimian, meanwhile, came in fifth, two positions out of the prize money. But if Oh is right, and robots will eventually be able to take control of factory-issue tractors or leap into action to safely land an airplane, there’s no reason to assume those mechanical drivers and pilots will be humanoid. Being slightly simian, but mostly inhuman, might just save the farm, or the day.

Now about those hooks…