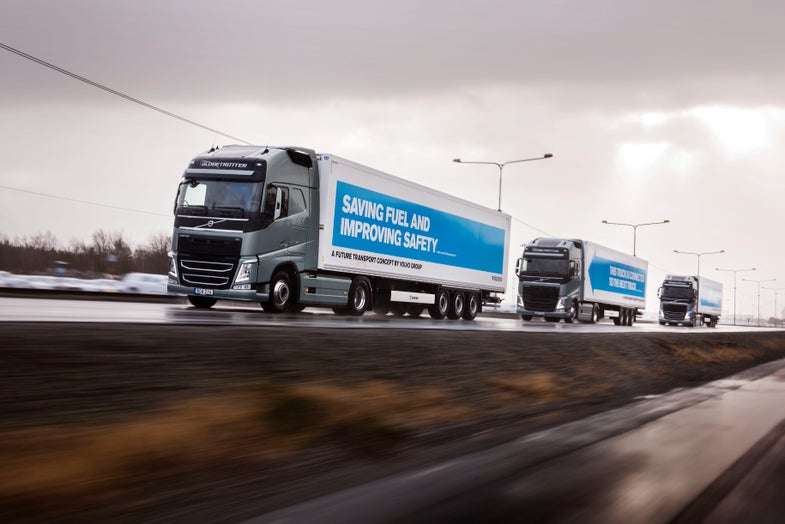 Yesterday, six platoons of self-driving trucks converged in Rotterdam in the Netherlands, part of the 2016 European Truck Platooning Challenge and marking the first time that trucks equipped with the technology had crossed international borders.

Platooning is when a group of automated or semi-automated trucks (a.k.a. a road train) is connected via wi-fi on the road. The trucks communicate with each other, maintaining a small distance between each vehicle. Having a short following distance is a bad idea for human drivers, who need more reaction time to react to a braking car up ahead. Computers don’t have the same kind of problem, so they are able to take advantage of some of the perks of tailgating. Following closely together opens up more space for other drivers on the road, and also reduces the push of air against the trucks, cutting the amount of fuel needed by up to ten percent.

The convoys were made up of trucks manufactured by six companies: DAF Trucks, Daimler Trucks, Iveco, MAN Truck & Bus, Scania, and Volvo Group. Each truck platoon left on March 29 and followed a different route, traveling from Belgium, Germany, and Sweden. The Scania team, based in Sweden, travelled the furthest, 1,250 miles across four borders. Each truck had a human driver inside who contributed to some steering tasks.

Every country that the trucks drove through had a different permitting process, and though the six companies were all participating in the challenge, their trucks each use a different wi-fi system to communicate, making mixing different companies’ trucks together in one platoon an impossibility for now.

During the road testing, researchers kept a close eye monitoring them via GPS, aircraft, and traffic monitoring systems. Results from the challenge will be released shortly.

Watch a video describing how the European challenge came together below.